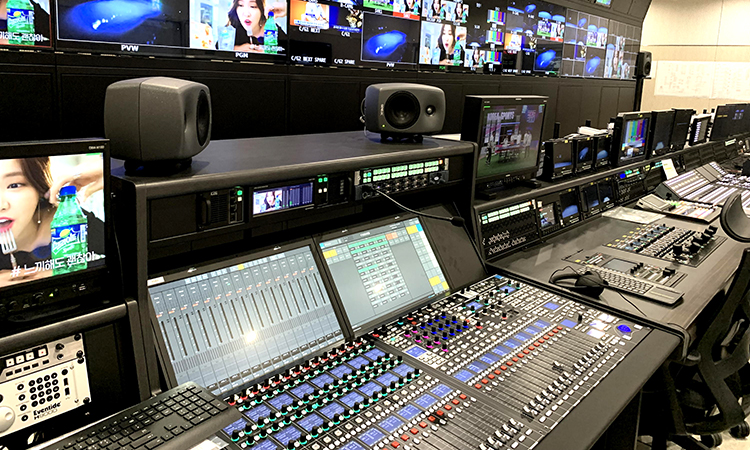 MBN, founded in 1993, produces a variety of news and entertainment programming. Their new studio complex is home to two studios of 660 square meters each, where a wide range of programs such as TV news, large-scale music and talk shows, dramas, sports competition shows, health care and children’s programs are produced.

“Maeil Broadcasting Network regards IP as the broadcast technology of the future and our goal is to be a fully ST2110-capable broadcast network within the next few years”, explains Byonghee Gwak, Technical Director at MBN. “This is why we wanted to integrate our broadcast production facility with our new studios and control rooms using an IP infrastructure right from the start. Another big plus is that, with our new flexible audio network, we can apply our workflows and change them at any time, easily modifying the whole setup via software configuration.”

MBN’s first installed Lawo radio mixing consoles for DMB radio and mc² audio production desks for MBN MONEY and the MBN News Center several years ago; their excellent experience with Lawo technology led them to choose Lawo again to perform a technical upgrade of MBN control rooms A and B in the new production center. The upgrade includes two mc²56 MkIII audio production consoles with shared A__UHD core, external servers for MCX, and Lawo’s HOME management platform for IP-based media infrastructures, as well as A__stage 80, A__MADI6 and A__digital 64 AoIP nodes, and an A__stage48 as studio stagebox. All equipment was installed by LG U+.

“Together with MBN, we developed a plan to upgrade the new production center to an IP facility and discussed the workflows our customer wanted to put in place,” explains Choi Won, Project Manager at LG U+. “After thorough consideration of various manufacturers, Lawo, with their IP-native, ST2110-compatible audio production consoles, won by a clear margin. The powerful, super-compact A__UHD core provides DSP pooling and full redundancy so that a dynamic and flawless production process is guaranteed.”

MBN’s new technology is managed by Lawo’s innovative HOME platform, which simplifies IP device management and makes adding new IP-connected audio I/O devices as easy as if they were baseband. The consoles automatically detect new devices and make them available at the touch of a button. HOME even manages IP addresses, multicast ranges, and VLANs, and includes security features like access control and quarantining of unknown devices to protect your network.

Byonghee Gwak is pleased with MBN’s selection of Lawo for this major upgrade. “We have already experienced the Lawo radio and mc² series mixing consoles over the years. We admire the innovative character, quality, reliability and stability of Lawo products and solutions, and the creative resource handling and efficiency that provides us with new and better ways of TV production.”