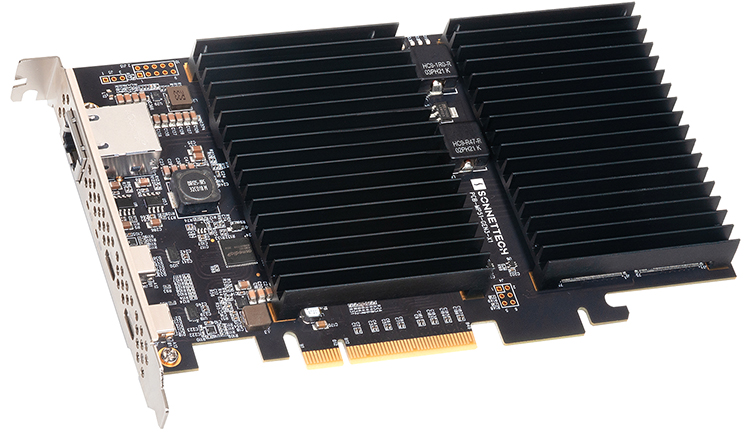 What It Does:
Sonnet's McFiver PCIe Card enables users to add high-performance internal SSD storage, plus 10GBASE-T (copper) 10 Gigabit Ethernet (10GbE), and 10Gbps USB-C ports to their systems but requires only a single card slot (instead of the three slots single-purpose cards would occupy). The McFiver card mounts one or two single- or double-sided M.2 NVMe 2280 PCIe SSDs (sold separately) for ultra-fast file access; using today's highest capacity SSDs, up to 16TB of storage may be installed. The card's 10GbE port connects to 10GbE network infrastructure and shared storage systems via inexpensive Cat 6 or Cat 6A cabling. The USB-C ports connect and power two high-performance USB peripherals, supporting a full 10Gbps connection through each port, and providing USB bus-powered SSD, SSD RAID, and hard drive devices with up to 7.5 watts of power through each port. 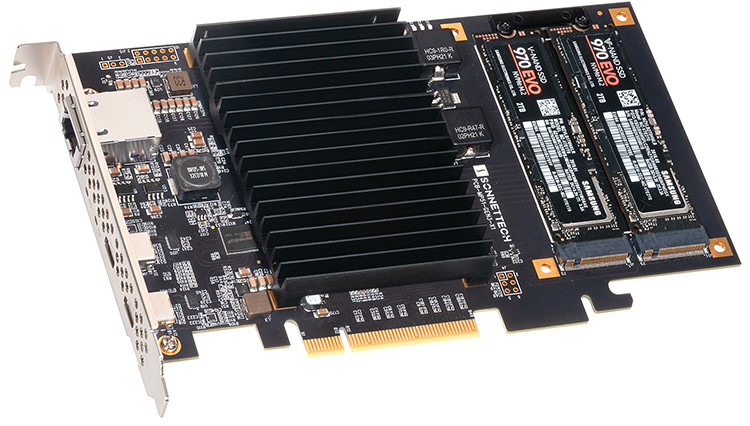 Why It's Important:
For most creators, the ability to move files quickly - whether to or from onboard storage, across a network, or to or from external drives - can be critical to their workflows. While individual adapter cards may offer the capability to speed up one part of the workflow, installing three adapter cards to get all the interfaces a user needs may not be feasible, even in computers with multiple expansion card slots. Sonnet's McFiver PCIe card provides all the benefits of individual SSD storage, 10 Gigabit Ethernet network interface, and 10Gbps USB-C adapters in a high-performance PCIe card that requires only a single card space for installation. Sonnet's engineers designed the card so that it provides great performance for each function. For users whose computers lack PCIe card slots - such as notebook, mini, and all-in-one desktops - but include Thunderbolt ports, installing the McFiver in one of Sonnet's Echo™ Thunderbolt to PCIe card expansion systems can add the McFiver card's interfaces through a single cable. 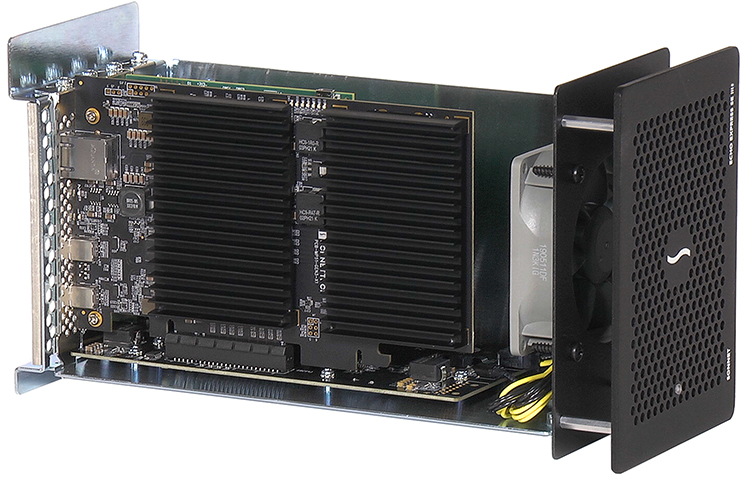 How It's Distinctive:
Compatible with macOS®, Windows, and Linux operating systems, the McFiver PCIe Card is the only computer card available featuring M.2 NVMe SSD slots and 10GBASE-T 10GbE and USB 3.2 Gen 2 USB-C ports. The card requires only a full-height card space and no power connection - there's no need to connect auxiliary power to the card or AC power adapters to connected USB devices for operation - so it is ideal for use in most any PC or Thunderbolt to PCIe card expansion system with an available x8 PCIe slot.

Because the McFiver employs an x8 PCIe 3.0 bridge chip, the card doesn't require specific SSDs or a particular motherboard to operate, nor PCIe bifurcation to support RAID features. Placed in a computer's PCIe 3.0 or 4.0 card slot, the McFiver card supports outstanding storage performance - a single NVMe PCIe SSD installed on the card can deliver data transfers up to 3,400 MB / s - with two SSDs installed and formatted as a RAID 0 set, sustained transfers up to 6,600 MB / s are supported.

The McFiver's RJ45 10GbE port connects to 10GbE infrastructure via inexpensive Cat 6 or Cat 6A copper cabling at distances of up to 55 or 100 meters, respectively. The card also supports multi-Gigabit (5 Gb / s and 2.5 Gb / s) Ethernet speeds on commonplace (existing) Cat 5e (and better) cabling at distances of up to 100 meters when used with switches with multi-Gigabit support. For Mac users, the card also offers supports Audio Video Bridging (IEEE 802.1Qav, AVB). When used with a switch or router (plus infrastructure) with AVB support, the card is ideal for use in pro audio and video applications where synchronization of data streams is critical.

Like other current Sonnet USB-C cards, the McFiver supports full 10Gbps bandwidth to each USB port. Sonnet designed the USB sub-system with a focus on intelligent power management and delivery for powering connected drives through its ports to deliver reliable operation when two drives are connected. The card also provides independent power regulation to isolate each port to prevent cross-coupled power glitches - such as when a hard drive spins up after connection - that may cause accidental disconnects of other connected devices.

When You Can Get It:
The McFiver PCIe Card (part number G10-USBC-M2-E) will be available the second week of June from Sonnet and soon after from channel partners worldwide at the suggested retail price of US$399.99.