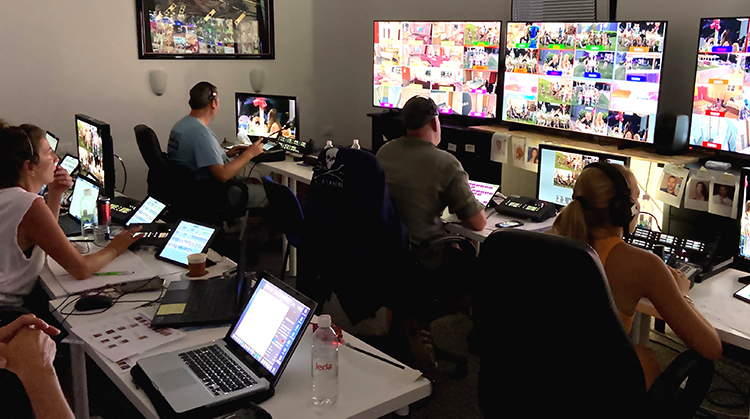 "VSM can be easily and quickly adapted to the frequently changing network setup we deal with in equipment rental - and it is also easy to operate, so we can make much better use of the potential of our production infrastructure," explains Christian Brauksiepe, responsible Technical Manager at smartregie.

For each smartregie production environment, different equipment modules are precisely combined according to client requirements and networked using state-of-the-art fiber-optic and cloud technology. In order to manage the existing IP-based network architecture more flexibly and make it more user-friendly, smartregie chose Lawo VSM to handle the video routing of a Riedel Mediornet system via IP network using Ember+ protocol, as well as tally and label transfer via TSL-5 protocol to the internal multiviewers. Three virtual VSM panels on tablets are used as the user interface.

"For example, on a production we just completed in Croatia, we had 45 permanently installed remote cameras and five shoulder-mounted cameras in use,” explains Brauksiepe. “Monitoring and adjusting the streams of the 50 cameras in parallel use would have been impossible with the conventional and operator-intensive solution. But with VSM running on tablets, all the controls are at our fingertips. A single keystroke is all it takes to switch streams and access settings. Real-time feedback from all components brings transparency, and status information can be displayed at a glance through global labeling."

In addition to simplified camera control and monitoring, VSM brings multiviewer functionality to smartregie, allowing operators to see, even from the second row, which cameras in the stream are online.

For the new set of The Bachelor/Bachelorette supervised by smartregie, which uses over 30 cameras distributed over two sets (House of the Candidates and Night of the Roses) smartregie will refine the workflow using VSM: in addition to image, sound will also be integrated.

"Our modular, mobile, networked smartregie system, managed via VSM, is a solution that fits every TV and film production," says Brauksiepe. "Our concept proves that with innovative ideas and components it is possible today to produce shows flexibly, efficiently, cost-effectively and sustainably. In a reality-show format, there is one reality that rarely changes: 'things usually turn out differently than you plan.'
That's why it's so important that the workflow behind the numerous cameras is lean, efficient and flexible. That's why Lawo is the system of choice!"