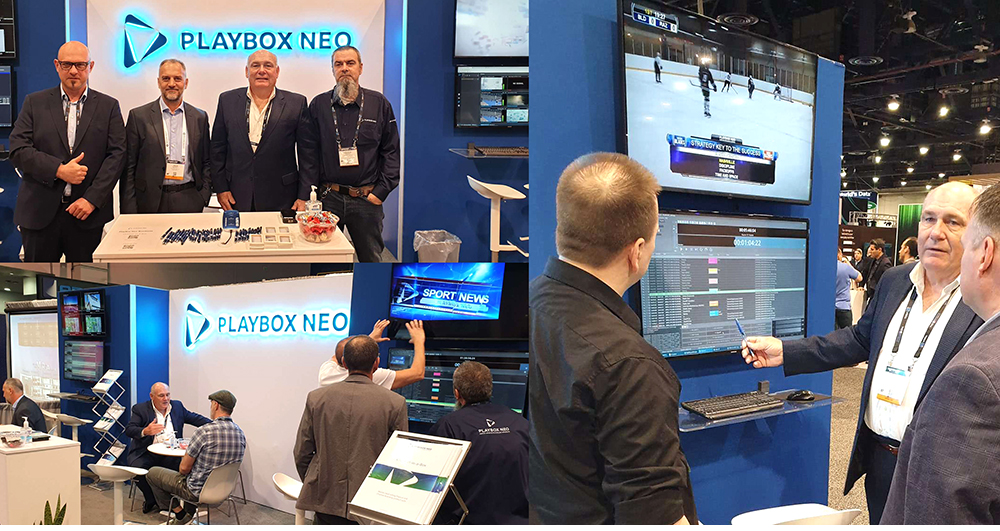 "The 36 month gap since the previous NAB Show has given broadcasters in the US an extended timeframe in which to plan the future of their business operations," comments Pavlin Rahnev, PlayBox Neo CEO. "Our strategy has long been to offer network managers the greatest possible freedom in the way they choose to work, whether hardware based, software-based, service-based or hybrid. PlayBox Neo continues to be the preferred choice of TV channel operators, telco service providers and playout facility companies. Scalability is a vital element, from single or multiple channel-in-a-box servers with customer-selected software modules up to a fully off-prem Cloud2TV system. PlayBox Neo customers also have complete freedom in how, when and where they migrate from SD to HD and/or 4K-UHD transmission."

"NAB proved a great opportunity to meet potential as well as established customers in person after three years of largely online interaction," adds Van Duke, PlayBox Neo US Director of Operations. "We made a careful assessment of customer priorities as expressed during the show and compared these with the feedback we receive during the normal course of business communication. Ease of installation and expansion, user-friendly operation and efficient maintenance continue to be the core requirements. We excel in all of these."

Available on a budget-friendly subscription basis, Cloud2TV allows new transmission services to be launched at very short notice, ranging from event-specific projects such as sports tournaments to permanent channels. Playout staff retain the full freedom to update schedules or switch to live feeds for late-breaking news.

An automated streaming and broadcast playout system based on 22 years of refinement, AirBox Neo-20 is designed to make TV content creation and management easy and stress-free. Available in 1U channel-in-a-box and 3U multichannel versions, it is suitable for local or IP-linked remote control. Playlist scheduling can be performed weeks ahead of actual transmission, media files finessed, rescheduled or integrated with live production, and playlists configured for 24/7 automated operation. Delivery across multiple time zones in multiple languages is fully supported. Latest-generation enhancements introduced at the April 2022 NAB Show include extended automatic alerts, picture-in-picture digital video effects, real-time loudness compliance and NDI connectivity.

PlayBox Neo's Capture Suite enables multiple ingest channels to be managed across multiple servers. Functions such as input selection, ingest presets, file-naming rules, assignments and auto-transfer can be performed quickly and easily from a single graphic interface. Features include a multiviewer with black-frame and frozen-frame alarms plus loudness audio level monitoring as well as manual, scheduled and compliance ingest modes with automated input switching. Content can be now edited before the completion of ingest. MXF and TS files are available for immediate playout via AirBox Neo-20 automation without having to wait for the ingest process to complete.