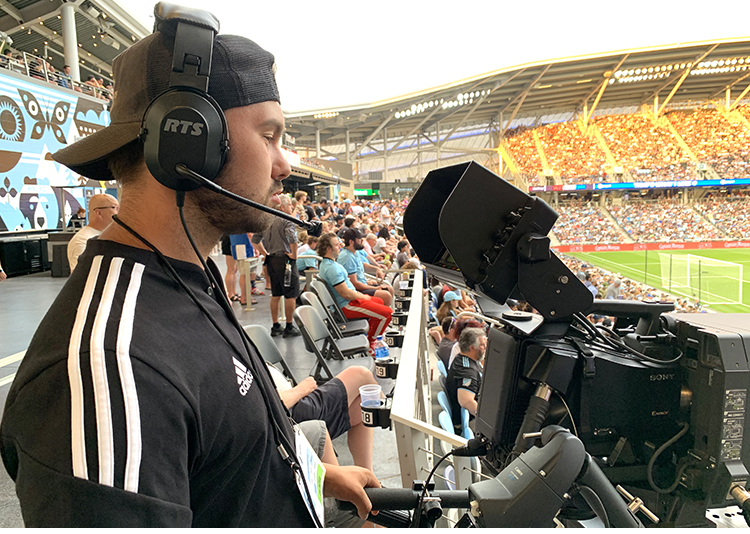 USA: When Major League Soccer’s Minnesota United FC franchise opened Allianz Field in 2019, the team’s vision was to create the best-possible fan experience within the 19,400-seat venue. The responsibility for coordinating the technical side of that lies largely with production engineer Cole Mayer. He relies on RTS intercoms to ensure that all game day events - from team introductions to halftime events and, most importantly, the stadium’s massive video display throughout the game - go off smoothly and as scheduled.

According to the Mayer, the in-stadium show on the video display is the centerpiece of their in-game content. “We produce our own show in real time, so it’s essentially the same as a telecast, but with the audience being inside the stadium,” he explains. “Our production control room is right next to the press box, and includes a switcher, two replay machines, plus clips, graphics, and audio - including a DJ.”

An RTS ODIN (OMNEO digital intercom) matrix is a critical tool for coordinating the in-game presentation. Minnesota United runs a 64-port ODIN frame with about 15 KP-4016 keypanels spread around the control room, along with three DKP-4016 desktop units. ODIN’s OMNEO capability allows the intercom to be part of the stadium’s Dante audio network.

Stage managers stationed throughout the stadium utilize RTS ROAMEO wireless beltpacks to coordinate the timing of various production elements during games. “The ROAMEO packs are a really key tool for us. It’s like having a keypanel on your hip,” notes Mayer. “We have wireless access points set up all around the stadium to keep us in direct communication, so everything happens smoothly and on cue, whether it’s directing the on-field camera, the team walk-out from the tunnel, halftime entertainment, etc.” 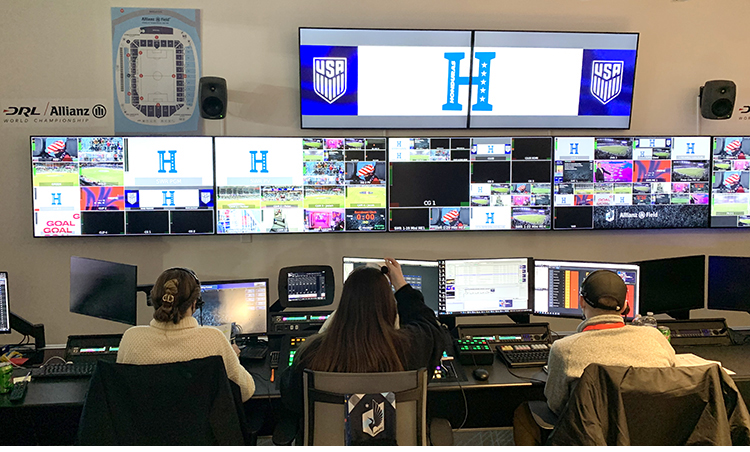 Cole Mayer and team rely on RTS intercoms for both in-game and digital/social media content creation and coordination.

Mayer also points out that ROAMEO’s plug-and-play connectivity gives him the ability to expand his productions as needed. In fact, he has a spare AP-1800 access point on hand for just that purpose.
“That’s the luxury of ROAMEO,” he states. “Wherever there’s a network connection, I can create wireless communication. I just configure a port on the Dante network, and the access point will service all of the beltpacks entering that space. So if we have a private event in a luxury suite, or even out in the parking lot, we can provide the same production quality as our in-game presentation.”

Since Allianz Field opened in 2019, RTS flexibility has made life easier when producing outside events, including live broadcasts, from the stadium. “We’ve done a number of bigger events here, and I’ve come to really appreciate how easily our network ties into broadcast trucks, most of which also use RTS,” notes Mayer. “Our regular game-day productions are pretty stable, but whenever I have a new challenge, I just call RTS and they will walk me through whatever’s needed.”

As a huge soccer fan who went to school in the Twin Cities, Cole Mayer feels fortunate to be working in his field for the team he loves. “Everything we do is produced in-house, from the in-game fan experience to podcasts and all kinds of video content,” he notes. “Having tools like RTS intercoms is critical to creating the kind of compelling content that Minnesota United fans deserve.”