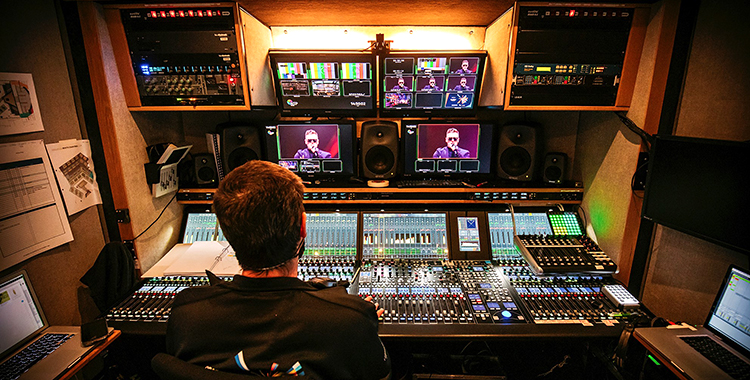 NLD: The EBU’s Eurovision Song Contest 2021 (ESC) in Rotterdam, whose semi-finalists will be announced in two instalments (Tuesday, May 18th, and Thursday, May 20th) promises to be a grand event despite social distancing regulations.

Though usually associated with a one-off staple millions of people in Europe and beyond like to watch, this year’s 65th edition kicked off with a 'Turquoise Carpet' event last Saturday, where all 33 semi-finalists were introduced to the world Cannes-style.

The slogan chosen by Rotterdam’s mayor, Ahmed Aboutaleb, “Be open, be positive”, was taken to heart by the Dutch host broadcasters NPO, NOS, AVROTROS as well as the Netherlands-based OB companies NEP and United (EMG), which again joined forces to cover the event.

To ensure pristine sound quality and reliability, NEP equipped its UHD1 and UHD2 twin OB trucks with 64-fader mc²56 consoles, Nova routing cores and Lawo’s VSM broadcast control system for intuitive and smooth control of the broadcast chain. The two OB trucks are set up in a Main/Backup configuration for seamless protection switching.

Two additional 48-fader mc²56 consoles, along with monitoring equipment and outboard gear provided by Lawo Rental, are stationed in a separate Music Room where music producer Tijmen Zinkhaan will mix all delegation and interval acts. While all broadcast audio connections are streamed via RAVENNA/AES67, the audio signals for the PA at the Ahoy venue are provided by Dante cards inside the Nova routing cores.

The selection of Lawo equipment was a deliberate choice by ESC 2021’s Head of Sound, Thijs Peters: “There was never any doubt that Lawo consoles were the perfect match for this prestigious assignment. They sound great, their routing capabilities are infinite, our setup integrates seamlessly and can be conveniently and intuitively controlled via Lawo’s VSM broadcast control system.”

This all-star lineup will make it easier for broadcast mix engineer Andre Swart, FX engineer Marcel Korfage and music producer Tijmen Zinkhaan to provide a sonic foundation that will allow all finalists to shine at the Grand Final on Saturday, May 22nd.