USA: With 42 sports teams, the athletic department at Harvard University has one of the largest and most historied programs in the USA. From football, basketball, hockey and rugby, to skiing, swimming and rowing, among others, the school’s sporting events draw attention from spectators, alumni and professional scouts, alike. The university broadcasts approximately 300 live and recorded events in a typical year, the majority of which they now live stream on ESPN+, ESPN’s direct-to-consumer platform. The school also presents footage from its sports teams across its various social media channels, such as Facebook and YouTube. 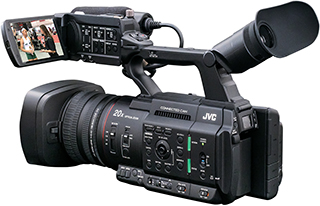 In order to seamlessly capture and transmit all the action, the Ivy League school relies on a variety of equipment, including the GY-HC500SPC CONNECTED CAM™ pictured and GY-HM890 camcorders from JVC Professional Video, a division of JVCKENWOOD USA Corporation. Equipped with a production-over-IP workflow solution in a compact form, the GY-HC500SPC Sports Production and Coaching cameras provide the university with the streaming and advanced graphics necessary to fully share the performances and stories of its student athletes.

While those models are used to capture and live stream mobile sporting events, such as skiing and rowing, the video production team at Harvard also relies on the KY-PZ100 Robotic PTZ cameras and RM-LP100 PTZ controllers, which are mounted at the school’s various fields and arenas. The team additionally has a large stable of other JVC camera models, such as the GY-HM250, GY-HM790 and GY-HM600, which they call on for various broadcasts.

When Imry Halevi, Assistant Director of Athletics at Harvard University, first joined the team eight years ago, he decided to bring JVC on board. Tasked with leading the department’s multimedia, streaming and video services, Halevi knew he needed to find reliable equipment that would fit the school’s budget and also provide the superior images he desired.

“Our mission is to tell the story of our amazing student athletes, coaches and alumni, and to preserve the Harvard sports history,” says Halevi. “That’s why we ended up making streaming one of our priorities. We want to ensure that if you are an alumni or fan of a Harvard student athlete, coach or team, you can keep up with everything they’re doing. Even if you can’t attend the games in-person, we are going to help you watch those games from afar,” he says.

Once the decision was made to buy the technology and build off the university’s infrastructure to stream the games live, Halevi set to work growing his JVC arsenal. “I have always been a fan of the quality of the JVC image, I like how it looks,” he adds. “I’ve used cameras from other manufacturers and JVC just looks the best to me.”

In addition to the quality of the images, Halevi explains that he also chose the camcorders as they are easy for training students to use professional equipment. “With all the menus and controls in the same position across all models, we can provide our students with a base knowledge to easily switch between the school’s current cameras, as well as feel comfortable using any new camcorders we might acquire.”

As longtime JVC users, Halevi and his team are sometimes given the unique opportunity to provide important feedback about current cameras and suggestions for enhancements to next-gen versions.  In order to ensure broadcast-quality sports productions, Halevi requested a camera similar in capture quality to his beloved GY-HM890 that also could provide advanced graphics, connectivity and streaming. “We wanted something that would be easy to use and have a big sensor, because we often shoot in low light. I gave them all my specs and I said, ‘you know, the 890s are great, but I need something smaller that I can just take around.’ In turn, they presented me with the GY-HC500SPC,” recalls Halevi.

The new GY-HC500SPC CONNECTED CAMs most recently came in handy during Harvard’s ski season, a challenging production set-up on the mountains, in cold weather, Halevi says. “When we sent the students to the mountain, it turned out to be like the coldest day of the year - negative 20 degrees with a wind chill. It was crazy. My biggest concern was that the cameras would just stop working because I couldn’t reasonably expect the cameras to work at all temperatures,” he recalls. However, Halevi said the JVCs were outfitted with Porta Brace Polar Bear packs and Hot Hands hand warmers, which kept the cameras, batteries, cables and even the lenses warm enough to continue plugging away.

“We filmed from 8 a.m. to 6 p.m. Never once did a camera shutdown, not even had a hiccup; it was incredible. Though that’s not why we chose the JVCs, it certainly reinforced why we use them. I expect them to work at normal conditions, but when I throw unexpected conditions at them and they continue to work, we know we have a camera brand for life,” Halevi concludes.