UK: Blackmagic Design has announced that the Hella Mega Tour headlined by Green Day, Fall Out Boy and Weezer, relied on an acquisition, control and delivery solution from Blackmagic Design for live big screen content and unique video backdrops.

The 21 date US leg of the tour played to up to 45,000 fans each night at Major League Baseball venues, including Wrigley Field, Fenway Park and LA’s Dodger Stadium, making it the largest major stadium event since live music halted in Spring 2020.

“Shows of this size and with this scale of pyrotechnics meant having operators on stage was not an option, but I felt there was a way for the lead singers, in particular, Green Day’s Billie Joe Armstrong, to interact with fans,” says Stuart. “I brought the idea of an automated dynamic camera to the table, so we’re not putting anyone between the band and their audience.”

Vis-A-Vis designed three systems based on the BlackCam tracking systems.

The first was the B60 carrying an URSA Broadcast with a Canon CJ15ex4.3B lens on a 60 foot track. The 90 degree curved rail ran along the front right hand side of the stage and continued down a 30 foot thrust running out into the crowd. A second B60 system with URSA Broadcast covered the left side of the front stage edge, while a smaller B20 dolly carried a Micro Studio Camera 4K on a tight circular track around Green Day drummer Tré Cool and his kit.

“I wanted to get across the dynamism of the drummer without having a camera operator standing all over him,” Stuart says. “We’re not putting anyone between the band and the audience.”

Content from those sources, plus another front of house URSA Broadcast and three more Blackmagic Micro Studio Camera 4K, was carried across SMPTE fiber to feed a bespoke production desk built around a Smart Videohub 40x40 router. 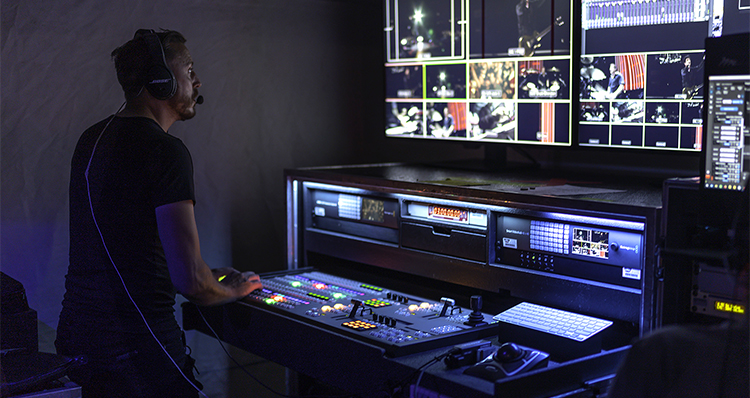 “Designed and built to be tour friendly, the system allows us to get in and out of places fast,” Stuart says. “It has all the flexibility needed to allow our engineers to get in, plug in, test, go live and get out again quickly.”

Not only were turnarounds between dates tour incredibly tight, but all venues were also open to the elements. “We were dealing with everything from the 100 degree midday heat in Texas to horrific rain in the South,” says Stuart.

“For me as a director, there is nothing more thrilling than feeling the energy that my camera operators get from the band to make the show what it is. A director is only as good as their camera team, and my team kills it every night,” Stuart concludes.

“After the past 18 months, it is fantastic to get music shows back on the road, and I hope fans appreciate the effort, care and attention it takes from a lot of people behind the scenes.”