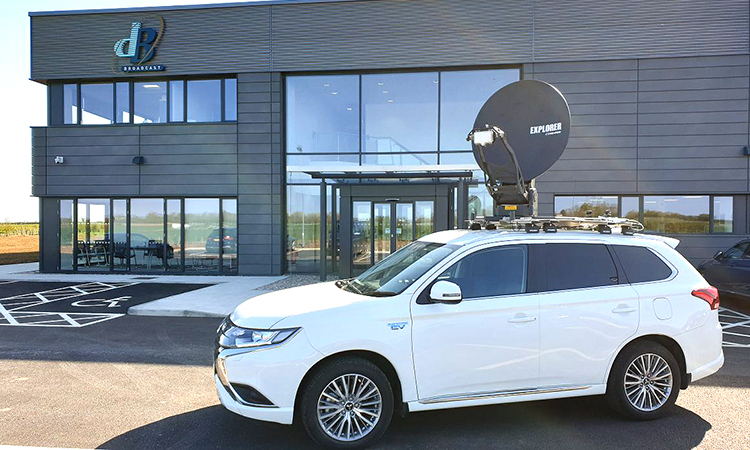 UK: dB Broadcast, the UK’s leading broadcast systems integrator, has delivered the first of four satellite vehicles for use by ITV Daytime in locations around the country. They replace ITV Daytime’s current fleet and have been designed to minimise their environmental footprint.

The new vehicles are commissioned on the latest Mitsubishi Outlander PHEV, an efficient hybrid vehicle. They were converted from standard passenger vehicles by Mitsubishi Specialist Vehicle Operations to remove the rear seats, and to add a custom bulkhead and twin-deck floor to allow for the installation of the technical broadcasting system.

The dB Broadcast design incorporates a battery/inverter system for clean, silent operation, and includes two solar panels on the roof of the vehicle to supplement the technical battery. For connectivity, each vehicle incorporates multiple options including an auto-pointing Cobham 8100 KA-band satellite link, and the latest quad channel LU800 LiveU encoder capable of simultaneously streaming up to four independent video signals, plus a high-power Wireless Access Point to boost connectivity around the car.

Where possible, equipment was serviced and repurposed from the existing fleet in keeping with the project’s sustainable ideology, this included the Ka-band satellite antennas and modems.

“This new fleet of broadcast cars will enhance our operational capability, as well as being very much in tune with ITV’s environmental approach”, said Tim Guilder, Head of Technology for Daytime. “Our ‘Green Team’ meets regularly with a mission to explore and implement environmentally aware solutions and we realized that we didn’t need a ‘Bureau-on-wheels’ anymore. It was a conscious decision to move away from traditional diesel-powered ‘Sat Vans’ over three years ago in favour of something smaller in terms of size and carbon footprint; something more agile, more all-terrain, and generally more fit-for-purpose when it comes to ITV Daytime’s daily Live TV coverage needs.

“In choosing the Mitsubishi PHEV, ITV joins a number of large organisations - such as the Highways Agency, who have opted for the high level of customisation available from Mitsubishi. “This latest evolution (the ‘Mk2’) of our Broadcast-kit equipped Sat Cars, in collaboration with ‘Team dB’, sees us progress that original theme. Overall, it gets a step closer to our long-term ambition of a fully EV fleet - particularly as battery range and public infrastructure is improved”, Tim concludes.

“The environmentally conscious ambitions of these vehicles directly link in with dB’s ongoing investments in sustainable business practices”, said Chris Whelan, Business Development Manager at dB Broadcast. “Our close working relationship with the ITV Daytime team has made the design and delivery of the fleet a huge success”.

The remaining three vehicles will be delivered in the coming weeks.