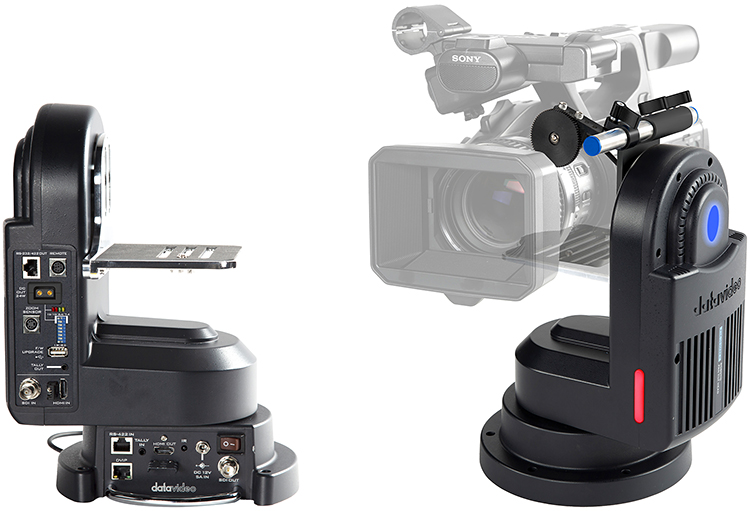 PTR-10(T) supports passthrough for all industry leading standards and has D-Tap output in multiple voltages to power the camera, and is compatible with a wide range of cameras from major manufacturers such as Sony, Canon, Panasonic & JVC.

NED/USA: Datavideo launches a completely revised version of their remote camera head. This camera head, PTR-10, works by mounting any regular camcorder or block camera. This converts the stationary camera to a full feature pan/tilt/zoom camera, granting you the image quality of high-end larger optics and sensor and no need to replace your existing cameras. PTR-10(T) has support for various cameras from large camera manufacturers such as Canon, Sony, JVC and Panasonic.

PTR-10 will become available in two versions; a regular version operated on mains power, or the PTR-10T which is powered by HDBaseT. This means that you can have a complete three camera streaming production station that’s connected with a single wire per camera. That will significantly reduce your setup and breakdown time.

PTR-10(T) is a remote head that can carry a payload up to 4KG and has a wide operating range of 340 degrees pan and 90 degrees tilt. The remote head is controlled from a distance, using Datavideos new high end camera controller RMC-300A, the RMC-180 or Datavideos all-in-one MobileCast production station HS-1600T.

The remote camera head contains passthrough for all major controls and signal interfaces such as HDMI and SDI, as well as a camera power output in D-Tap with selectable voltage output. The PTR-10(T) can be expanded with ZEK-1, giving you the option to store and recall zoom positions if you have a compatible camera.

PTR-10(T) also comes with an optional wall mount. Because of the inertia generated by moving a heavy camera around, PTR-10(T) needs a sturdy base. WM-11 is a very sturdy wall mount that can carry up to 50kg, and makes the perfect base for a remote camera head. This wall mount is also compatible with any other Datavideo PTZ camera.

“PTR-10(T) is the perfect match for anybody that is looking into downsizing the operation.” Says Johan Lieffers, Managing Director of Datavideo Technologies Europe BV. “With a flock of PTR-10(T)’s and a single controller operated by a single person you can do the work which you normally would’ve done with much more people. With a downsized production team, it’s easier to keep social distance and keep running your production. PTR-10(T) will help you achieve that goal and will bring your production up to 2021 level.”