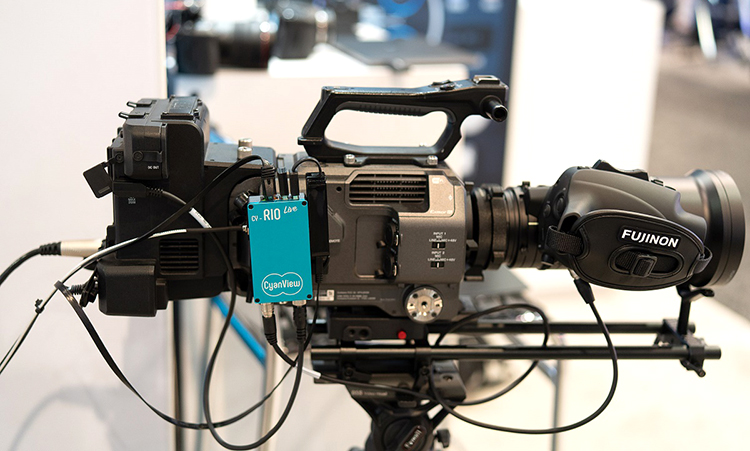 BEL: CyanView - a leading developer of specialist camera integration solutions - will be using the 2022 IBC Show (Booth 10.D31) as an opportunity to demonstrate their new RIO Live solution, previously introduced and awarded ‘Product of the Year’ at the latest NAB Exhibition.

RIO Live is a camera-mounted addition which facilitates shading and tally across a diverse range D-Cinema cameras, camcorders and mirrorless cameras in multi-camera live productions such as concerts, theater plays or fashion shows.

The RIO Live unit can be coordinated with an extensive range of cameras in order to facilitate remote control. The diverse range of cameras supported and the flexible connection options available provide producers and creatives both in Broadcast and ProAV markets with the ability to deploy complex camera setups; this is fundamental when using large sensor D-Cinema cameras with PL zoom lenses and 3D LUTs, and ensures that a specific, consistent look - usually achieved in post-production - can be secured across the cameras, even in live productions and whilst streaming.

The RIO Live unit further allows for the control of zoom lenses and lens motors, including B4 box lenses, PL zoom lenses, Canon Cine Servos and Fujinon Cabrios, along with C-Motion on large zoom lenses, and Chrosziel and Tilta motors on prime lenses. It also facilitates full gimbal control, which enables producers to create a PTZ setup using cameras and accessories of their choice, including robotic and cable cams, dollies and jibs.

Finally, the unit also allows for control of the internal tally of a camera  or an auxiliary tally connected to the RIO Live itself, with camera selection and tally ingest undertaken through protocols such as TSL and GPIO, or direct integrations with Atem, Tricaster or Vmix.

As well as providing physical control over all cameras, including simultaneous start for recordings, the RIO Live facilitates full shading functionality across a multi-camera setup. This includes remote video shading control for cameras where such functionality might be missing or locked, or when using 3D LUT-based processors such as the Flanders Box-IO, AJA ColorBox or the CyanView VP4 to add and coordinate functionalities as required.

Crucially, all of this can be coordinated flexibly by CyanView remote control, either devoting individual (or multiple) controllers to each camera, creating sub-groups, or through a single master controller. This ability to control multi-brand camera integrations through a single RCP (or indeed any RCP combination desired) grants immense creative potential to broadcast professionals, whilst still ensuring consistency and order across the setup. Few other products allow for such a diverse range of cameras and standards to be controlled through a single RCP. Setups combining CyanView RCPs and RIO Live units have seen as many as 100 cameras (of numerous different brands) all connected through one remote  as used for reality TV shows.

Indeed, the full capabilities of CyanView's RCP will also be on display at their IBC booth, demonstrating how the RCP seamlessly integrates camera control with the linear colour corrections available in RGB and ProcAmp correctors in post. Its interface, which resembles that of a standard broadcast camera, allows for efficient multi-cam alignment in live productions.

CyanView will also be highlighting their support for the recently-announced AJA ColorBox, a flexible hardware processing solution with nodes that ensure accurate mappings and unprecedented color fidelity for live and post production HDR/SDR workflows. The ColorBox is particularly useful when multiple camera types and brands are implemented, as aligning cameras in this context requires more precise adjustments similar to the ACES workflow. With the ColorBox, the process is made as easy and intuitive as if the operator were undertaking the adjustments in the camera itself.

Speaking of their ability to demonstrate the RIO Live to audiences at IBC, David Bourgeois, Founder and CEO of CyanView, said: “The RIO Live provides so much creative potential for creative broadcast professionals, giving them absolute flexibility in their production setup, and allowing them to select cameras according to the benefits their attributes will bring, without having to worry about how they will be coordinated and controlled. Through the application of shading tools even when such functionality is not present in the camera itself, and with an incredibly easy and straightforward workflow and control system, the RIO Live is ideal for remote, distributed, live and cinematic multi-camera productions”.