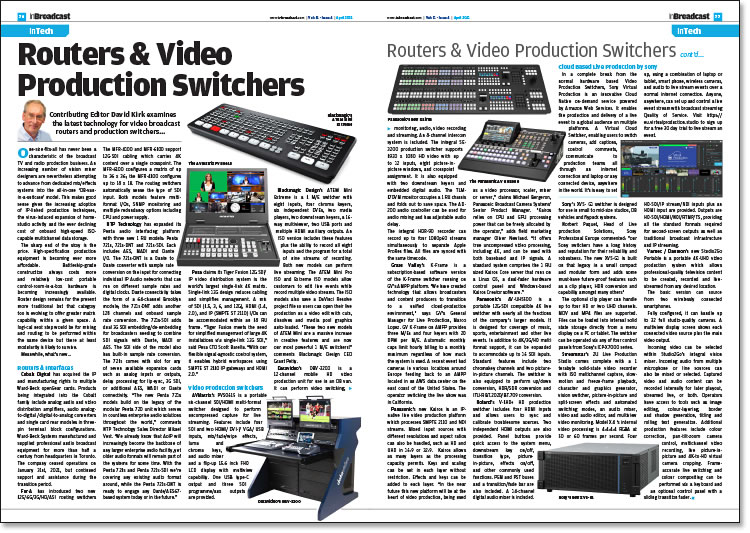 One-size-fits-all has never been a characteristic of the broadcast TV and radio production business. An increasing number of vision mixer designers are nevertheless attempting to advance from dedicated mix/effects systems into the all-in-one ‘OB-van-in-a-suitcase’ model. This makes good sense given the increasing adoption of IP-linked production techniques, the virus-induced expansion of home-studio activity and the ever declining cost of onboard high-speed ISO-capable multichannel data storage.

The sharp end of the story is the price. High-specification production equipment is becoming ever more affordable. Battleship-grade construction always costs more and relatively low-cost portable control-room-in-a-box hardware is becoming increasingly available. Router design remains for the present more traditional but that category too is evolving to offer greater matrix capability within a given space. A logi-cal next step would be for mixing and routing to be performed within the same device but there at least modularity is likely to survive.

For-A has introduced two new 12G/6G/3G/HD/ASI routing switchers The MFR-4100 and MFR-6100 support 12G-SDI cabling which carries 4K content over a single crosspoint. The MFR-6100 configures a matrix of up to 36 x 36; the MFR-4100 configures up to 18 x 18. The routing switchers automatically sense the type of SDI input. Both models feature multi-format I/Os, SNMP monitoring and multiple redundancy options including CPU and power supply.

NTP Technology has expanded its Penta audio interfacing platform with three new 1 RU models: Penta 721s, 721s-DNT and 721s-SDI. Each includes AES, MADI and Dante I/O. The 721s-DNT is a Dante to Dante converter with sample rate conversion on the input for connecting individual IP Audio networks that can run on different sample rates and digital clocks. Dante connectivity takes the form of a 64-channel Brooklyn module; the 721s-DNT adds another 128 channels and onboard sample rate conversion. The 721s-SDI adds dual 3G SDI embedding/de-embedding for broadcasters needing to combine SDI signals with Dante, MADI or AES. The SDI side of the model also has built-in sample rate conversion. The 721s comes with slot for any of seven available expansion cards such as analog inputs or outputs, delay processing for lip-sync, 3G SDI, or additional AES, MADI or Dante connectivity. “The new Penta 721s models build on the legacy of the modular Penta 720 unit which serves in countless enterprise audio solutions throughout the world,” comments NTP Technology Sales Director Mikael Vest. “We already know that AoIP will increasingly become the backbone of any larger enterprise audio facility, yet older audio formats will remain part of the systems for some time. With the Penta 721s and Penta 721s-SDI we’re covering any existing audio format around, while the Penta 721s-DNT is ready to engage any Dante/AES67-based system today or in the future.”

Datavideo’s OBV-3200 is a 12-channel mobile HD video production unit for use in an OB van. It can perform video switching,   monitoring, audio, video recording and streaming. An 8-channel intercom system is included. The integral SE-3200 production switcher supports 1920 x 1080 HD video with up to 12 inputs, eight picture-in-picture windows, and crosspoint assignment. It is also equipped with two downstream keyers and embedded digital audio. The TLM-170VM monitor occupies a 1 RU chassis and folds out to save space. The AD-200 audio controller can be used for audio mixing and has adjustable audio delay.

The integral HDR-90 recorder can record up to four 1080p60 streams simultaneously to separate Apple ProRes files. All files are synced with the same timecode.

Grass Valley’s K-Frame is a subscription-based software version of the K-Frame switcher running on GV’s AMPP platform. “We have created technology that allows broadcasters and content producers to transition to a unified cloud-production environment,” says GV’s General Manager for Live Production, Marco Lopez. GV K-Frame on AMPP provides three M/Es and four keyers with 2D DPM per M/E. Automatic monthly caps limit hourly billing to a monthly maximum regardless of how much the system is used. A recent event had cameras in various locations around Europe feeding back to an AMPP located in an AWS data center on the east coast of the United States. The operator switching the live show was in California.

Panasonic’s new Kairos is an IP-native live video production platform which processes SMPTE 2110 and NDI streams. Mixed input sources with different resolutions and aspect ratios can also be handled, such as HD and UHD in 16:9 or 32:9.  Kairos allows as many layers as the processing capacity permits. Keys and scaling can be set in each layer without restriction. Effects and keys can be added to each layer. “In the near future this new platform will be at the heart of video production, being used as a video processor, scaler, mixer or server,” claims Michael Bergeron, Panasonic Broadcast Camera Systems’ Senior Product Manager. “Kairos relies on CPU and GPU processing power that can be freely allocated by the operator,” adds field marketing manager Oliver Newland. “It offers true uncompressed video processing, including 4K, and can be used with both baseband and IP signals. A standard system comprises the 1 RU sized Kairos Core server that runs on a Linux OS, a dual-fader hardware control panel and Windows-based Kairos Creator software.”

Panasonic’s AV-UHS500 is a portable 12G-SDI compatible 4K live switcher with nearly all the functions of the company’s larger models. It is designed for coverage of music, sports, entertainment and other live events. In addition to 4K/3G/HD multi format support, it can be expanded to accommodate up to 16 SDI inputs. Standard features include two chromakey channels and two picture-in-picture channels. The switcher is also equipped to perform up/down conversion, HDR/SDR conversion and ITU-R BT.2020/BT.709 conversion.

Sony’s XVS- G1 switcher is designed for use in small to mid-size studios, OB vehicles and flypack systems.

Norbert Paquet, Head of Live production Solutions, Sony Professional Europe commented: ”our Sony switchers have a long history and reputation for their reliability and robustness. The new XVS-G1 is built on that legacy in a small compact and modular form and adds some must-have future-proof features such as a clip player, HDR conversion and capability amongst many others” The optional clip player can handle up to four HD or two UHD channels. MOV and MP4 files are supported. Files can be loaded into internal solid state storage directly from a menu display on a PC or tablet. The switcher can be operated via any of four control panels from Sony’s ICP-X7000 series.

The basic version can source from two wirelessly connected smartphones.

Fully configured, it can handle up to 32 full studio-quality cameras. A multiview display screen shows each connected video source plus the main video output.

Incoming video can be selected within Studio2Go’s integral vision mixer. Incoming audio from multiple microphone or line sources can also be mixed or selected. Captured video and audio content can be recorded internally for later playout, streamed live, or both. Operators have access to tools such as image editing, colour-layering, border and shadow generation, titling and rolling text generation. Additional production features include colour correction, pan-tilt-zoom camera control, multichannel video recording, live picture-in-picture and 4K-to-HD virtual camera cropping. Frame-accurate live switching and colour compositing can be performed via a keyboard and an optional control panel with a sliding transition fader.