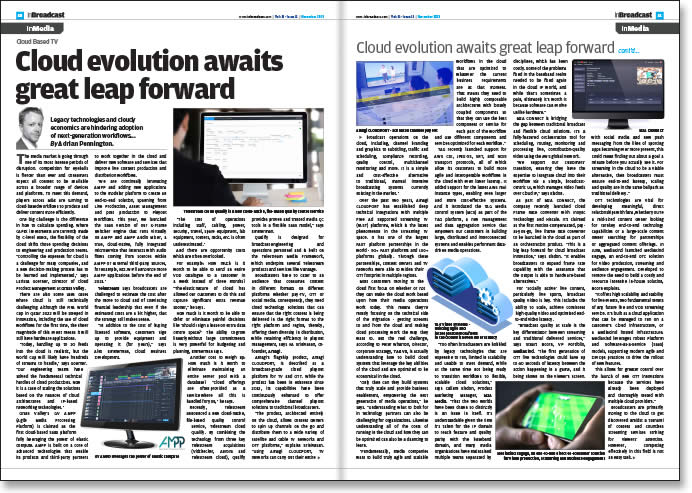 The media market is going through one of its most intense periods of disruption. Competition for eyeballs is fiercer than ever and consumers expect all content to be available across a broader range of devices and platforms. To meet this demand, players across M&E are turning to cloud-based workflows to produce and deliver content more efficiently.

One big challenge is the difference in how to calculate spending. Where CAPEX investments are currently made by C-level execs, the flexibility of the cloud shifts those spending decisions to engineering and production teams. “Controlling the expenses for cloud is a challenge for many companies, and a new decision-making process has to be learned and implemented,” says Larissa Goerner, Director of Cloud Product Management at Grass Valley.

There are also some uses cases where cloud is still technically challenging. Although the FIFA World Cup in Qatar 2022 will be steeped in innovation, including the use of cloud workflows for the first time, the sheer magnitude of this event means it will still have hardware applications.

“Today, handling up to 20 feeds into the cloud is realistic, but the World Cup will likely have hundreds of streams to handle,” says Goerner. “Our engineering teams have solved the fundamental technical hurdles of cloud productions. Now it is a case of scaling the solutions based on the nuances of cloud architectures and IP-based networking technologies.”

Grass Valley’s GV AMPP (Agile Media Processing Platform) is claimed as the first cloud-based SaaS platform fully leveraging the power of elastic compute. AMPP is built on a core of advanced technologies that enable its products and third-party partners to work together in the cloud and deliver new software and services that improve live content production and distribution workflows.

“We are continually innovating AMPP and adding new applications to the modular platform to create an end-to-end solution, spanning from Live Production, Asset Management and post production to Playout workflows. This year, we launched the SaaS version of our K-Frame switcher engine that runs virtually on AMPP and AMPP Audio Mixer, a true, cloud-native, fully integrated microservice that interacts with audio flows coming from sources within AMPP or external third-party sources, for example, NDI. We’ll announce more AMPP applications before the end of 2021.”

Telestream says broadcasters are challenged to estimate the cost after the move to cloud and of convincing financial leadership that even if the estimated costs are a bit higher, that the strategy still makes sense.

“In addition to the cost of buying licensed software, customers sign up to provide equipment and operating it (for years),” says Alex Emmerman, Cloud Business Development.

And there are opportunity costs which are often overlooked.

For example: How much is it worth to be able to send an entire VOD catalogue to a customer in a week instead of three months?  “The elastic nature of cloud has allowed our customers to do this and capture significant extra revenue sooner,” he says.

How much is it worth to be able to defer or eliminate painful decisions like ‘Should I sign a lease on extra data centre space?’  The ability to grow linearly without large commitments is very powerful for budgeting and planning, Emmerman says.

Another cost to weigh up: How much is it worth to eliminate maintaining an entire server pool with a database?  “Cloud offerings are often provided as a service where all this is handled for you,” he says.

Qualify is designed for broadcast engineering and operations personnel and is built on the Telestream Media Framework, which underpins several Telestream products and services like Vantage.

Broadcasters have to cater to an audience that consumes content in different formats on different platforms whether pay-TV, OTT or social media. Consequently, they need cloud technology solutions that can ensure that the right content is being delivered in the right format to the right platform and region, thereby, offering them diversity in distribution, while retaining efficiency in playout management, says KA Srinivasan, co-founder, Amagi.

Amagi’s flagship product, Amagi CLOUDPORT, is described as a broadcast-grade cloud playout platform for TV and OTT. While the product has been in existence since 2012, its capabilities have been continuously enhanced to offer comprehensive channel playout solutions to traditional broadcasters.

“The product, architected entirely on the cloud, allows content owners to spin up channels on the go and distribute them to a wide variety of satellite and cable TV networks and OTT platforms,” explains Srinivasan. “Using Amagi CLOUDPORT, TV networks can carry out their entire broadcast operations on the cloud, including, channel branding and graphics to subtitling, traffic and scheduling, compliance recording, quality control, multichannel monitoring and more. It is a simple and cost-effective alternative to traditional, manual intensive broadcasting systems currently existing in the market.”

Over the past two years, Amagi CLOUDPORT has established deep technical integrations with multiple Free Ad Supported Streaming TV (FAST) platforms, which is the latest phenomenon in the streaming TV space. It has one of the largest FAST platform partnerships in the world - 50+ FAST platforms and 100+ platforms globally. Through these partnerships, content owners and TV networks were able to widen their OTT footprint in multiple regions.

Most customers moving to the cloud first focus on whether or not they can make the cloud work based upon how their media operations work today. This means they’re mostly focusing on the technical side of the migration - getting streams to and from the cloud and making cloud processing work the way they want to. But the real challenge, according to Peter Wharton, Director, Corporate Strategy, TAG VS, is actually understanding how to build cloud systems that leverage the key abilities of the cloud and are optimized to be economical in the cloud.

“Only then can they build systems that truly scale and provide business enablement, empowering the next generation of media operations,” he says. “Understanding what to look for in technology partners can also be challenging for organizations. Likewise understanding all of the costs of running in the cloud and how they can be optimized can also be a daunting to learn.

“Fundamentally, media companies want to build truly agile and scalable workflows in the cloud that are optimized to whatever the current business requirements are at that moment. That means they need to build highly composable architectures with loosely coupled components so that they can use the best component or service for each part of the workflow and use different components and services optimized for each workflow.”

TAG recently launched support for AWS CDI, JPEG-XS, SRT, and NDI5 transport protocols, all of which allow its customers to build more agile and interoperable workflows in the cloud with even lower latency. It added support for the latest AWS m6i instance types, enabling even larger and more cost-effective systems. And it introduced the TAG Media Control System (MCS) as part of the TAG platform, a new management and data aggregation service that empowers our customers in building large, distributed and interconnected systems and enables performant data-driven media operations.

“Too often broadcasters are hobbled by legacy technologies that are expensive to run, limited in scalability and unable to meet demand, while at the same time not being ready to transition workflows to flexible, scalable cloud solutions,” says Callum Elsdon, Product Marketing Manager, M2A Media. “That the two worlds have been drawn so distinctly is an issue in itself. It’s understandable given the time it’s taken for the IP domain to reach feature and quality parity with the baseband domain, and many media organisations have maintained multiple teams separated by disciplines, which has been costly. Some of the problems fixed in the baseband realm needed to be fixed again in the cloud IP world, and while that’s sometimes a pain, ultimately it’s worth it because software can evolve unlike hardware.”

“We support our customers’ transition, ensuring they have the expertise to integrate cloud into their workflow via a simple, broadcast-centric UI, which manages video feeds over cloud IP,” says Elsdon.

As part of M2A CONNECT, the company recently launched Cloud Frame Rate Converter with InSync Technology and Hiscale. It’s claimed as the first motion-compensated, pay-as-you-go, live frame rate converter to be launched in the cloud as part of an orchestration product. “This is a big leap forward for cloud broadcast innovation,” says Elsdon. “It enables broadcasters to expand frame rate capability with the assurance that the output is akin to hardware-based alternatives.”

“Broadcast quality at scale is the key differentiator between streaming and traditional delivered services,” says Stuart Boorn, VP Portfolio, MediaKind. “The first generation of OTT live technologies could have up to 60 seconds of latency between the action happening in a game, and it being shown on the viewer’s screen. With social media and new push messaging from the likes of sporting apps becoming ever more present, this could mean finding out about a goal a minute before you actually see it. For streaming in the cloud to be a viable alternative, then broadcasters must ensure end-to-end latency, scaling and quality are in the same ballpark as traditional delivery.”

“It offers high scalability and stability for live events, two fundamental tenets of any future live and VOD streaming service. It’s built as a cloud application that can be managed to run on a customer’s cloud infrastructure, or a MediaKind hosted infrastructure. MediaKind leverages robust Platform and Software-as-a-Service (SaaS) models, supporting modern agile and DevOps practices to drive the rollout of new features.

This allows for greater control over the launch of new OTT innovations because the services have already been deployed and thoroughly tested with multiple cloud providers.”

Broadcasters are primarily moving to the cloud to get discovered amidst a tsunami of content and countless streaming services striving for viewers’ attention. However, competing effectively in this field is not an easy task.

“Broadcasters should look for a tech partner that gives them peace of mind and makes launching, operating, and managing their Cloud TV an easy process - providing them with a set of tools to compete at the same level as seasoned media companies with far more resources,” says Nuno Sanches, GM, Media & Telecommunications, Kaltura. “This is the best way to overcome this technology gap and guarantee superb and engaging viewing experiences that stand out, all delivered from the cloud.

Kaltura says it provides media companies all the capabilities needed to rapidly launch and operate a D2C service on par with global streaming giants.

The flexibility of the Kaltura TV Platform in particular enables media organisations to combine any content type with any business model and continuously experiment with new monetization techniques, pricing schemes, content offerings, promotions, and distribution paths.

The broadcasters 24i speaking to aren’t migrating fully to the cloud until the cost of transcoding and distributing live 24/7 channels comes down significantly. It has several broadcast customers using its fully cloud-based, end-to-end streaming solution to manage VOD content and live events like sports, including transcoding.

“But those who stream linear channels and associated catch-up still prefer to transcode on-premise, even as they move the data layer and even sensitive subscriber information into the public or private cloud, creating a hybrid infrastructure,” says Thomas Christensen, CTO. “Long term, we expect egress costs to fall and we’re planning for a fully cloud-based multi-channel offering that allows broadcasters and Pay TV operators to fully enjoy the benefits of the cloud, including scale, cost savings through a shared, multi-tenant infrastructure, and passing the burden of system security and DDoS protection to a third party.”

Christensen continues, “24i’s mantra is ‘making streaming simple, which translates to helping our customers make the most of the cloud as best suits their business. That might be a fully cloud-based solution for pure-OTT VOD services and sports broadcasters with live events to stream, or a hybrid multi-channel TV-as-a-Service offering that reduces operational overheads and egress costs for bigger broadcasters and pay TV services.

“We’re also intensively developing our data platform, ensuring that at every part of the content value chain - from ingest to playback - we’re collecting and reporting the data needed to deliver proactive support and monitoring.”