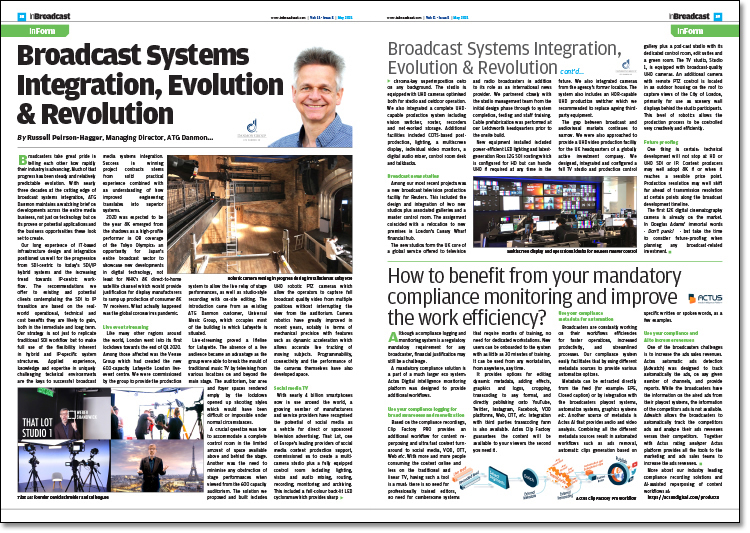 Broadcasters take great pride in telling each other how rapidly their industry is advancing. Much of that progress has been steady and relatively predictable evolution. With nearly three decades at the cutting edge of broadcast systems integration, ATG Danmon maintains a watching brief on developments across the entire media business, not just on technology but on its proven or potential applications and the business opportunities these look set to create.

Our long experience of IT-based infrastructure design and integration positioned us well for the progression from SDI-centric to today’s SDI/IP hybrid systems and the increasing trend towards IP-centric work-flow. The recommendations we offer to existing and potential clients contemplating the SDI to IP transition are based on the real-world operational, technical and cost benefits they are likely to gain, both in the immediate and long term. Our strategy is not just to replicate traditional SDI workflow but to make full use of the flexibility inherent in hybrid and IP-specific system structures. Applied experience, knowledge and expertise in uniquely challenging technical environments are the keys to successful broadcast media systems integration. Success in winning project contracts stems from solid practical experience combined with an understanding of how improved engineering translates into superior systems.

2020 was expected to be the year 8K emerged from the shadows as a high-profile performer in OB coverage of the Tokyo Olympics: an opportunity for Japan’s entire broadcast sector to showcase new developments in digital technology, not least for NHK’s 8K direct-to-home satellite channel which would provide justification for display manufacturers to ramp up production of consumer 8K TV receivers. What actually happened was the global coronavirus pandemic.

Like many other regions around the world, London went into its first lockdown towards the end of Q1 2020. Among those affected was the Venue Group which had created the new 600-capacity Lafayette London live-event centre. We were commissioned by the group to provide the production system to allow the live relay of stage performances, as well as studio-style recording with on-site editing. The introduction came from an existing ATG Danmon customer, Universal Music Group, which occupies most of the building in which Lafayette is situated.

Live-streaming proved a lifeline for Lafayette. The absence of a live audience became an advantage as the group were able to break the mould of traditional music TV by televising from various locations on and beyond the main stage. The auditorium, bar area and foyer spaces rendered empty by the lockdown opened up shooting styles which would have been difficult or impossible under normal circumstances.

A crucial question was how to accommodate a complete control room in the limited amount of space available above and behind the stage. Another was the need to minimise any obstruction of stage performances when viewed from the 600 capacity auditorium. The solution we proposed and built includes UHD robotic PTZ cameras which allow the operators to capture full broadcast quality video from multiple positions without interrupting the view from the auditorium. Camera robotics have greatly improved in recent years, notably in terms of mechanical precision with features such as dynamic acceleration which allows accurate live tracking of moving subjects. Programmability, connectivity and the performance of the cameras themselves have also developed apace.

With nearly 4 billion smartphones now in use around the world, a growing number of manufacturers and service providers have recognised the potential of social media as a vehicle for direct or sponsored television advertising. That Lot, one of Europe’s leading providers of social media content production support, commissioned us to create a multi-camera studio plus a fully equipped control room including lighting, vision and audio mixing, routing, recording, monitoring and archiving. This included a full-colour back-lit LED cyclorama which provides sharp chroma-key superimposition onto on any background. The studio is equipped with UHD cameras optimised both for studio and outdoor operation. We also integrated a complete UHD-capable production system including vision switcher, router, recorders and net-worked storage. Additional facilities included COTS-based post-production, lighting, a multiscreen display, individual video monitors, a digital audio mixer, control room desk and talkbacks.

Among our most recent projects was a new broadcast television production facility for Reuters. This included the design and integration of two new studios plus associated galleries and a master control room. The assignment coincided with a relocation to new premises in London’s Canary Wharf financial hub.

The new studios form the UK core of a global service offered to television and radio broadcasters in addition to its role as an international news provider. We partnered closely with the studio management team from the initial design phase through to system completion, testing and staff training. Cable prefabrication was performed at our Letchworth headquarters prior to the onsite build.

New equipment installed included power-efficient LED lighting and latest-generation Ross 12G SDI routing which is configured for HD but can handle UHD if required at any time in the future. We also integrated cameras from the agency’s former location. The system also includes an HDR-capable UHD production switcher which we recommended to replace ageing third-party equipment.

The gap between broadcast and audiovisual markets continues to narrow. We were also approached to provide a UHD video production facility for the UK headquarters of a globally active investment company. We designed, integrated and configured a full TV studio and production control gallery plus a pod-cast studio with its dedicated control room, edit suites and a green room. The TV studio, Studio 1, is equipped with broadcast-quality UHD cameras. An additional camera with remote PTZ control is located in an outdoor housing on the roof to capture views of the City of London, primarily for use as scenery wall displays behind the studio participants. This level of robotics allows the production process to be controlled very creatively and efficiently.

One thing is certain: technical development will not stop at HD or UHD SDI or IP. Content producers may well adopt 8K if or when it reaches a sensible price point. Production resolution may well shift far ahead of transmission resolution at certain points along the broadcast development timeline.

The first 12K digital cinematography camera is already on the market. In Douglas Adams’ immortal words - Don’t panic!  - but take the time to consider future-proofing when planning any broadcast-related investment.