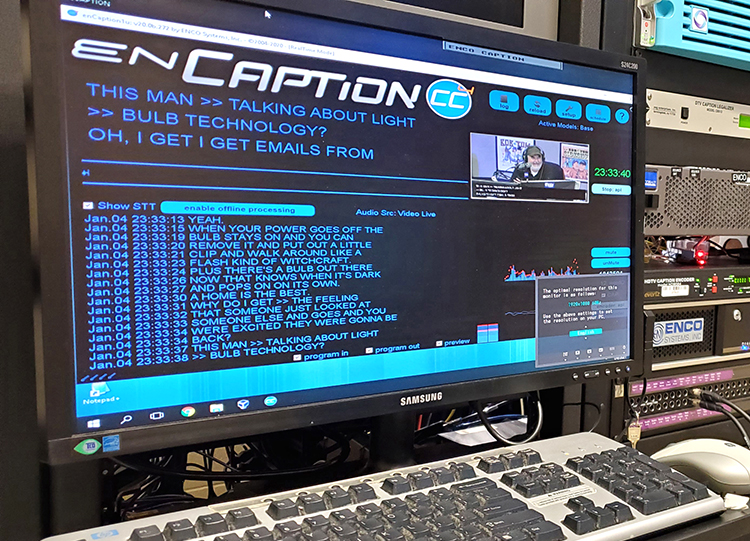 USA: Owned by Circle City Broadcasting, WISH-TV is a proud affiliate of The CW Network and delivers the latest breaking news under its News 8 brand. Circle City also owns and operates MyNetworkTV affiliate WNDY-TV, which provides around-the-clock entertainment, sports, and local interest programming to Central Indiana viewers. Wanting a more cost-effective way to closed caption its content, the station selected the automated enCaption4 system from ENCO to meet its both its scheduled and late-breaking captioning needs.

Prior to adopting enCaption4, all of WISH-TV’s closed captioning was done by human transcribers through a service company that would dial in to the station’s caption encoders. The huge amount of local news content WISH-TV produces - up to 12 hours per day - required a lot of dial-ins and with the rates charged by such services, the broadcaster’s captioning costs were very high. “Our main goal wasn’t necessarily to save money, but more importantly to allow us to caption a greater majority of our content in a more cost-effective manner,” explained Mike Selby, Staff Engineer at WISH-TV.

“We saw that enCaption4 would allow us to caption more of our programs for less money than we were paying for dial-in captioning, so we requested a demo unit for a trial,” said Selby. “It worked right out of the box and we were impressed with its accuracy.”

The station first used enCaption4 on the locally produced TV version of nationally syndicated radio program The Bob & Tom Show, which started airing on WNDY in October 2020. Since then, they have expanded their use of enCaption4 across both WNDY and WISH.

enCaption4’s REST API gave WISH-TV the flexibility to set up their captioning operations exactly the way they desired and the ability to control enCaption4 through their own custom software. “Our IT developer created an application that runs on a Raspberry Pi platform and enables us to easily start and stop the captioning process,” explained Selby. “Our homebrew software also uses GPIOs on the Raspberry Pi to trigger the switching of our AJA KUMO router to the desired SDI source for our enCaption4 system, and to connect enCaption4 to the appropriate downstream caption encoder. In this manner, we can use our single enCaption4 system on our choice of the WISH, WNDY or control room signals.”

In addition to its cost efficiency, enCaption4 has also benefited WISH-TV and WNDY-TV by allowing station staff to quickly respond to unexpected, last-minute captioning requests. When the newsroom notifies the engineering team that they have a breaking news special they need captioned, an engineer can simply click a button to start captioning and another to stop it when the report is done. “It’s a very fast and easy process, and we can get captioning on air right away without needing to make arrangements with an external service,” said Selby.

Most significantly, enCaption4 has enabled the broadcaster to expand its closed captioning to nearly all of its content. “Having a machine that can handle all of our captioning needs is like a dream come true,” praised Selby. “I’m impressed with how far the technology has come over the years, specifically enCaption4. We had long hoped that someone would offer speech-to-text capabilities that work accurately enough for our on-air needs, so we could just hit a button and have it work. ENCO has done that with enCaption4.”