AUS: Australian codec experts Tieline based in Perth, Western Australia, have become the latest manufacturer to join the RAVENNA community; a move which follows hard on the heels of the announcement of a new firmware release that adds RAVENNA support to their Gateway family of codecs.

Tieline codecs specialize in streaming low latency, high quality audio over a range of wired and wireless IP transports and facilitate the integration of compressed and uncompressed IP audio streams around the broadcast plant. The codecs are often gateway devices in IP networks bridging between wide area network (WAN) nodes that may include the broadcast plant, other studios (inter-studio links), production facilities and live events. Gateway and Gateway 4 codecs deliver a flexible platform capable of adeptly routing audio between equipment based on standards like RAVENNA, AES67 and ST 2110-30 as well as between devices using proprietary AoIP protocols like WheatNet-IP and others. 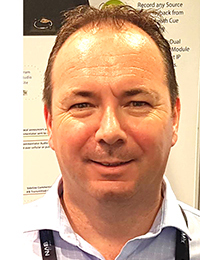 “Ever since the days of POTS and ISDN, Tieline has always advocated for interoperability of equipment from different manufacturers,” said Charlie Gawley pictured, Tieline’s VP Sales APAC/EMEA. “The world of IP is no different. It’s why our Gateway platform is AES67, ST 2110-30, NMOS and now RAVENNA compliant, allowing devices using different AoIP protocols to connect seamlessly.”

Andreas Hildebrand, RAVENNA Evangelist at ALC NetworX, is pleased to welcome Tieline on board: “RAVENNA is used widely by broadcasters around the world who have moved to IP workflows. No other technology offers the same level of performance as RAVENNA which offers ultra-low latency AoIP transport, full signal transparency and rock-solid reliability all over standard network infrastructures. Integrating RAVENNA support is therefore a logical step for Tieline as it facilitates easy interfacing between Gateway and Gateway 4 codecs and RAVENNA devices over AoIP networks.”