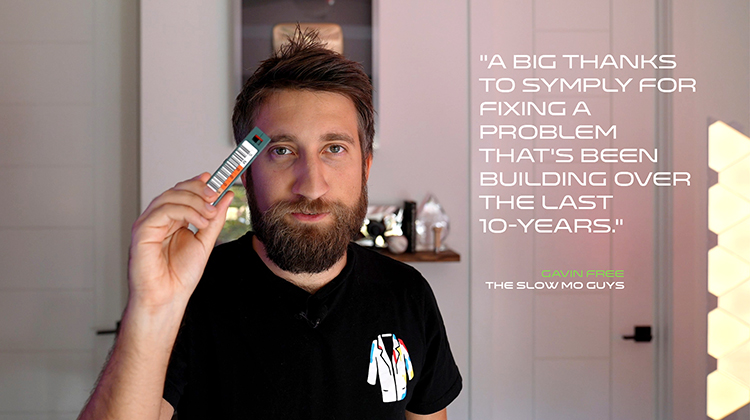 UK: If you’ve managed to navigate YouTube over the past decade without watching at least one of the many fantastically fun (and very informative) films by The Slow Mo Guys then you’re in limited company. The channel that Gavin Free started in 2010 has had almost 2.4 billion views and now has over 14.6 million subscribers.

Gavin started out in the industry as a Digital Imaging Technician (DIT) before specializing in the use of high-speed Phantom cameras. He later enlisted the assistance of fellow slow mo fanatic Dan Gruchy and The Slow Mo Guys were born. A lot of the content that Gavin likes to shoot is captured at 90,000 frames per second, which stretches out one second of captured footage to one hour when played back at a typical 24/25p frame rate. This is perfect for the ‘offensively crisp’ slow motion footage that The Slow Mo Guys are renowned for, but less friendly to their data storage requirements. Gavin’s current camera of choice is a Phantom TMX that demands approximately 1GB of storage for every one-thousand frames it captures, which is 90GB per second (give or take). In Gavin’s own words they are left with “massive data storage needs.”

Earlier this year Gavin contacted Symply with a problem that we hear a lot; “I have a lot of redundancy with RAIDs but not a lot of actual backup capacity.” Gavin keeps most of the footage they shoot so after filming sessions he’s “left with an absolute wedge of data to deal with.”  And up until this point, all their data has been stored on hard drives - be those bare internal drives, external drives, RAID systems or storage servers - and Gavin says, “there is something quite terrifying about turning on a twelve-year-old drive.” This is why Gavin has turned to Symply and the use of LTO data tape technology to fix a problem that’s been building over the last ten years. And will make the next ten years and beyond much more bearable. 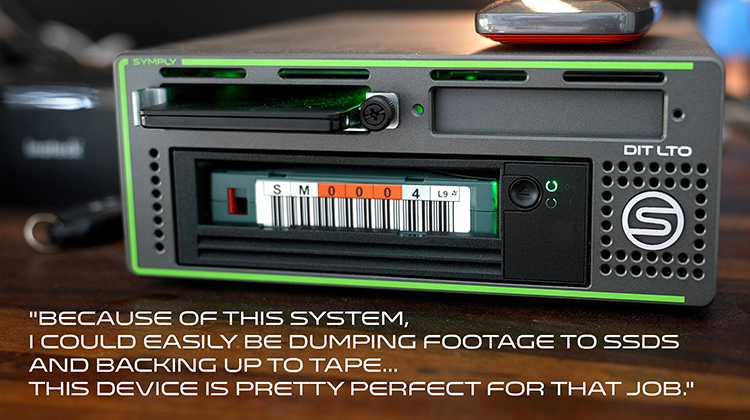 More often than not, videos that The Slow Mo Guys put out will include throwbacks from much older footage and Gavin always prefers to edit in the original raw footage. Rummaging through his shelves and trying to find the files on whatever drive he happened to save the footage on was not only time consuming and cumbersome but also potentially unreliable, especially as a lot of the footage (and the drives it is stored on) are notably aging. Choosing to use a SymplyDIT LTO-9 alongside YoYotta LTFS software has revolutionized Gavin’s data management, providing him with a much more convenient and reliable long-term storage solution. By using LTO-9 technology a massive 18TB (native capacity) can be stored on a single, compact and lightweight data tape that’s also incredibly affordable. And to Gavin’s surprise, his half-height LTO-9 drive can even read and write data to his LTO-9 tapes at 300MB/sec; around three-times faster than when he was previously reading/writing to single hard drives.

Talking of tapes, Symply bundles IBM LTO media with all tape drives but Gavin has initially started with forty-five LTO-9 tapes, providing him with a whopping 810TB capacity. This means he can store everything he has shot so far for the channel and everything new for many years to come, giving him peace of mind. And all Gavin needs to access his footage is one device. In fact, Gavin plans to use the SymplyDIT LTO for creating backups at source, by taking the unit with him when he travels. The SymplyDIT LTO is an enhanced version of the SymplyPRO LTO model - a Thunderbolt and SAS connected desktop LTO tape drive - featuring two 2.5” bays that can be used to read and write to inserted SSDs or Atomos Master Caddy compatible drives. “Because of this system, I could easily be dumping footage to SSDs and backing up to tape simultaneously, even overnight and verifying. This device is actually pretty perfect for that job. That's why it's called the DIT.”

LTO has a designed shelf-life of 30-years and it doesn’t require constant power like a hard drive does, neither is it susceptible to ‘bit-rot’ like a hard disk drive, or even an SSD is. If you’re unfamiliar with bit rot, this is the slow and ‘silent’ deterioration in the integrity of digital data that ultimately results in data corruption and data loss. Neither of which is good. The actual cost of the LTO tapes is the cheapest element of the overall solution, so it’s easy and cost-effective to keep adding capacity as required. An IBM LTO-9 18TB tape cartridge retails for just $159.99 (at the time of publication). This is what makes LTO the ideal format for making both secure backups and for archiving data. The SymplyDIT LTO connects to Gavin’s Mac over Thunderbolt 3, but is also compatible with Windows computers and could equally be connected to a non-Thunderbolt enabled computer over SAS. To efficiently manage the writing of data to and from his tapes, Gavin is using YoYotta for macOS - a great piece of software for managing projects, ensuring all the data written to tape is verified, and providing audited reports and media searches. Without YoYotta, Gavin could use free SymplyATOM software to have simple drag-and-drop transfers to and from an LTO tape.

A massive thank you to Gavin for sharing his experience and we encourage you to watch his insightful video in full. And don’t forget to subscribe to both The Slow Mo Guys 2 and main The Slow Mo Guys channels, as well as the Symply YouTube channel to stay up to date with all things Disk, Tape and Cloud.