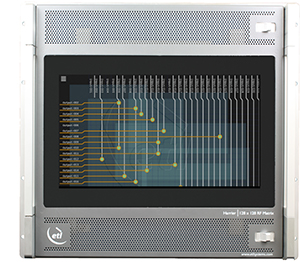 UK: Televisa, one of the leading media companies in Latin America and operators of a direct-to-home satellite pay television system in Mexico, has chosen ETL Systems’ RF distribution equipment for its ground segment upgrade, following a rigorous selection process.

Televisa is one of Mexico’s most powerful and influential TV networks, leading provider in the pay TV market. Producing some of the most popular telenovelas in the region, Televisa has played a major role in boosting the popularity of Spanish-language TV content.

ETL Systems, designers and manufactures of world-class RF distribution equipment, were chosen to replace and upgrade Televisa’s existing 64 x 64 matrix that, as their operation had grown, had become obsolete.

In order to receive signals from multiple satellites, Televisa required a bigger matrix to then distribute these signals to all integrated receiver decoders (IRDs).

The size (10U) of the Harrier chassis was also beneficial as they were limited on available space.

Commenting on the project Amar Achaibou, Amfar director general said: “The response from ETL software when the matrix lost power was much faster than the competition, as was the stability of the signal after passing through the matrix. ETL also offered a free lifetime support guarantee, so should we encounter any issues we can rely on their support. Both of these factors are incredibly important to us, as we pride ourselves on offering a great service for consumers.

“We were also impressed by the different options of input/output modules, the architecture of the matrix and its modular design. During the demo period the whole team used the software, praising the intuitive and user-friendly interface, as well as the alarm reports.”

The project was the acquisition of one piece of equipment - ETL’s L-Band matrix 72x80, which will be used in the Rx site of the broadcaster, news, feeds own programming for monitoring. All satellite traffic that comes to the facility needs to pass through this piece of equipment, making reliability and redundancy crucially important.

Local integrator Amfar were also involved with the project, helping with the logistics to import and deliver equipment to Televisa and also some support of the equipment.

To find out more about ETL’s range of RF distribution equipment, please visit: