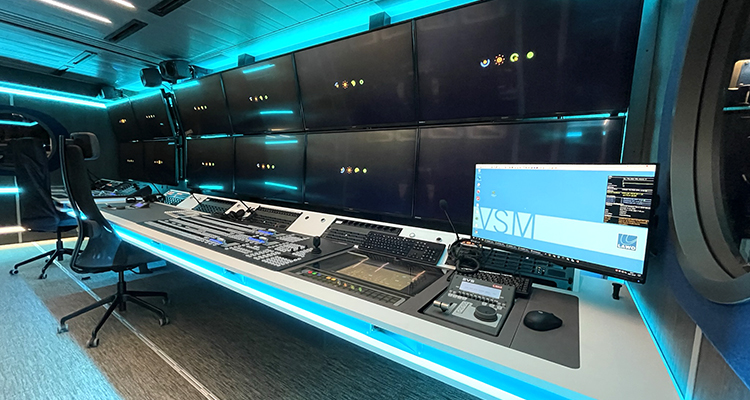 Ü10 has already proven its mettle, successfully providing live production for the German Television Awards (RTL) on its maiden voyage. In the future, Ü10 will be used mainly for the production of the German Soccer League (Bundesliga).

The Ü10 OB van is designed as a trailer and contains enough space for up to 26 people to work in a relaxed atmosphere, thanks to an extension of approx. 60m² of working space. It can work with up to 24 UHD cameras, and is completed by a modern set-up truck. The biggest conceptual innovation of the Ü10 project is the complete separation of control room and technology: the technical components are not installed in the OB van itself, but are completely housed in ten 19" racks in the central equipment room in the accompanying set-up van. Both vehicles are connected to each other by redundant fiber optic interlinks.

The two Lawo mc² consoles in the OB van are each outfitted with fully redundant A__UHD cores. Each stand-alone core delivers 1,024 channels of audio processing (48/96kHz) and offers numerous monitoring options as well as downmixing and upmixing. A__UHD technology is based on open AoIP standards such as ST2110-30 / -31 and AES67/RAVENNA, and utilize Ember+ and NMOS for control. For large productions, the vehicle can access up to eight video and audio stage boxes.

“As part of our new OB van build, we were faced with the decision of which audio system to use,” says Mathias Heinrich of Studio Berlin, sound engineer for Ü10. “We wanted forward-looking IP technology, and we have always relied on Lawo for audio processing and mixing, so only A__line AoIP nodes combined with a new mc²56 MKIII or an mc²96 came into consideration. Due to the space limitations of an OB van, we opted for the mc²56 console.” 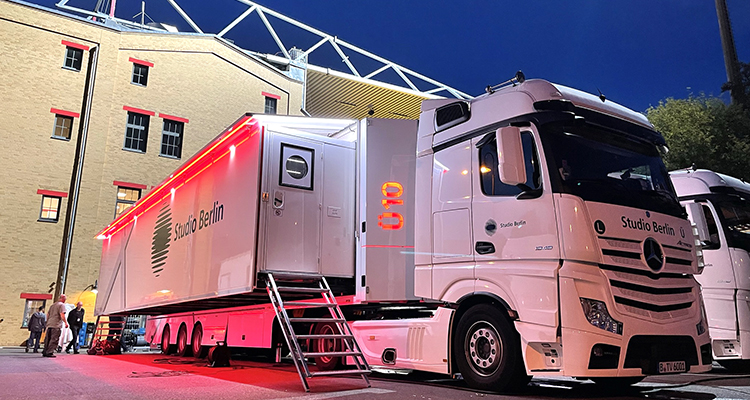 “Due to the structured surface of the Lawo consoles and their peripherals, a seamless transition with almost unchanged operation is possible despite the technology change to ST2110 AES67/RAVENNA,” says Heinrich. “The Lawo audio infrastructure combines to make a high-performance system that we believe can cope with almost any large-scale production. The Ü10 was conceived and built with major sports productions and show events in mind, and is therefore equipped to handle any imaginable production.”

The Ü10 allows productions with up to 24 UHD cameras, plus additional wireless cameras. It is equipped with a Grass Valley 12G K-Frame XP Compact vision mixer with XTREME option. Two Grass Valley control panels, a Karrera K-Frame 3 M/E in the main control room and a Korona 2 M/E in the second control room, access the image mixer. For the router, Studio Berlin chose the decentralized MediorNet solution from Riedel, which manages the video and audio signals as well as the multiviewers.

All of this production technology is controlled by VSM (Virtual Studio Manager) from Lawo. This manufacturer-agnostic system controls all video/audio routers and mixers, intercoms, UMDs and multiviewers, “glue”, and other third-party baseband and IP devices. 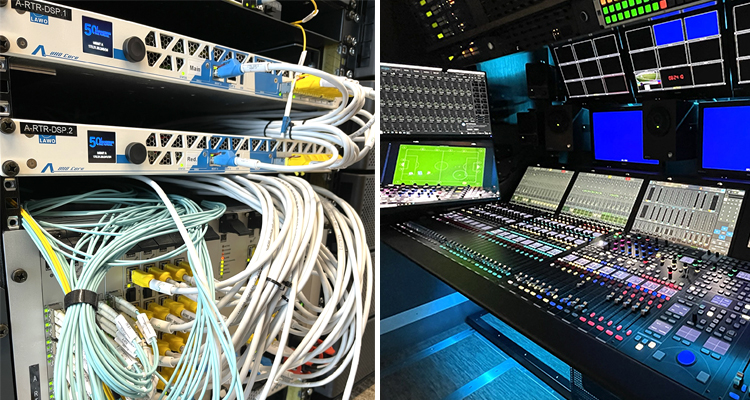 “Using VSM, we can quickly route individual intercom ports from Riedel to the MADI streams of the Micron UHD cores and the AES ports of the A__stage80 audio stageboxes at the touch of a button,” says Heinrich. “The fully redundant VSM system is the only sensible solution for us to be able to work in a clearly structured and, above all, fast and efficient way, not only in the intercom area, but also for the wiring of transmission lines, monitors, de-embedders, and all other video and audio signals.”

Heinrich is certain: “With VSM, we are prepared for any request from the customer.”

The ability to create pseudo-devices within VSM makes it possible for the whole team to work “virtually”. This “embedded workflow” conserves physical resources such as MADI streams or AES paths, which provides freedom and flexibility elsewhere.

Heinrich says that “Two Lawo V__pro8 units were installed for additional embedding and de-embedding, which enables us to quickly and easily shift times in terms of an audio/video offset. Any Dolby alignment is a ‘piece of cake’ with this.”

By moving the technology out of the OB van and into the accompanying set-up truck, the Ü10 work areas have been optimized, making Plexiglas partitions superfluous. This ingenious concept enables extremely flexible use of space: by moving doors and monitor walls, an open-plan control room can quickly be created by combining the two individual control rooms. Ü10’s air-conditioning system does not need to cool any equipment, so air exchange and filtering are likewise optimized, and treatment with UV light renders viruses harmless - a technique that has already been tried and tested in the health sector, but represents a completely new approach in the construction of OB vans.

The Ü10 also sets standards in terms of reliability during productions. The vehicle is equipped with a powerful UPS buffer, and in the event of a power failure, Ü10 can continue running the entire production for 15 minutes on battery power alone, leaving time to react and change the power source should an emergency arise.