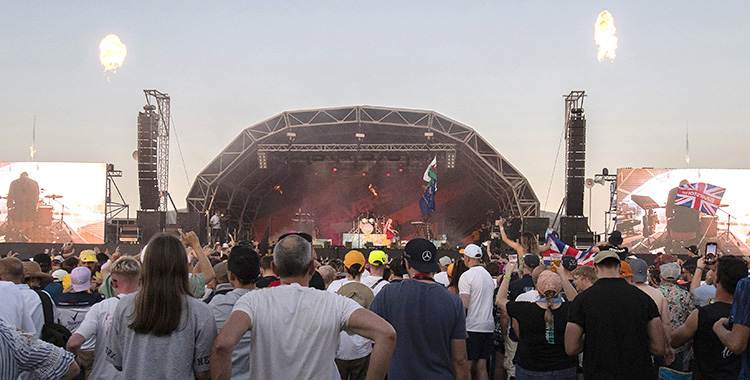 UK: The Formula 1 British Grand Prix weekend at Silverstone provided the setting for the latest and largest phase of the UK Government’s Event Research Programme for the return of audiences to large-scale live events. Alongside the entertainment on the track, motorsports fans were treated to a raft of musical performances from Rudimental DJ, Anne Marie and Becky Hill, thanks to a festival stage equipped with sound reinforcement from Electro-Voice and Dynacord.

Safe Hands Audio took responsibility for the audio setup and deployed their Electro-Voice X-Line Advance X2 line-array loudspeaker system to cater to the large crowd. “The X2 is our best option for this kind of production,” says Neal Allen, owner of Safe Hands Audio. “The X2’s rigging weight and compact size were both important considerations, but it was the system’s vocal throw, combined with its punch-to-size ratio, that really made it a perfect fit.”

The main FOH system for the stage comprised 24 X2-212 high‑performance compact 12" two-way cabinets with 12 X12-128 dual 18" subwoofers. “Due to the capacity crowd, people were spread across the full width of the stage; there was a need to fill a pocket, so we turned to an old friend - 4 X-Line XVLS - to spot-fill a specific area, and it worked perfectly,” recalls Allen. Delays and out-fills saw a further 12 X2-212 cabinets alongside four X12-128 subs.

Power for the main system was provided by 10 Dynacord TGX20 4-channel DSP amplifiers, each capable of delivering a power density of 20,000 watts. Control and monitoring of the system throughout the weekend came from the manufacturer’s new MXE5 matrix mix engine, combined with the powerful SONICUE sound system software over a Dante network.

“The combination of SONICUE and MXE5 has been excellent because we have full visibility of the system for control,” adds Allen. “We are very familiar with SONICUE and the advantages it can bring us now and this has given us the confidence to go fully Dante with our transport.”

With the UK’s largest live-event test concluded, Allen was happy to reflect on a weekend that went very well. “To be honest, it was just a wonderful feeling to be back out and working on a gig after such a long time,” he says. “Seeing happy faces in the audience was a reminder of why we all do this for a living and it was great to play my part in putting on an excellent show for them. The sound system performed flawlessly as we expected it to. Everything sounded great and I think we helped to make the UK’s largest trial event so far a memorable experience for everyone who attended.”