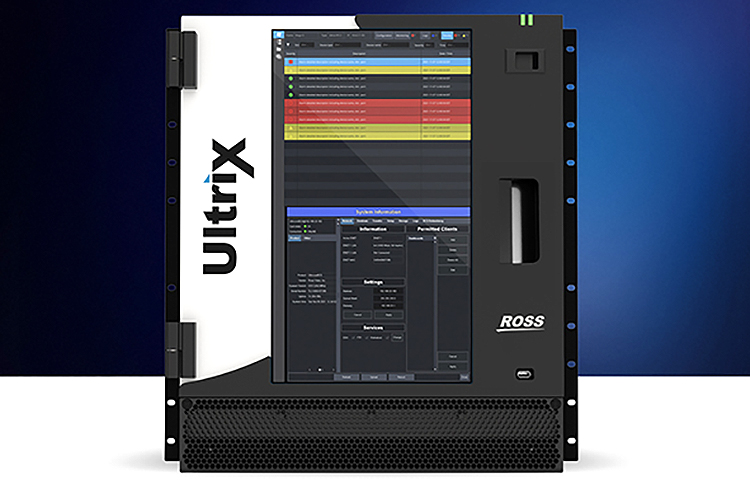 Director of Product Management for Hyperconverged Solutions at Ross Video, Todd Riggs, explained, “When we launched Ultrix we had 1RU and 2RU frame sizes.  A couple of years later we brought the 5RU frame to market. Today, with the launch of the FR12, our award-winning platform makes a huge leap forward, one that will rock the world for a wide range of markets.”

The FR12 is as attractive as it is clever, with its appealing smart door that’s an LCD display designed to help you with monitoring your system, troubleshooting, configuring, and control via a high-resolution, full-size touchscreen panel.

The FR12 is powerful too, boasting up to 288 x 288 SDI ports with a 6144 x 6144 TDM audio fabric, up to 288 frame syncs, 288 clean quiet switches and up to 48 x 100 PIP multiviewers. It also has up to 8 SDPE blades that can be configured as a single 8ME Ross Acuity switcher, 8 independent Ross Carbonites or even a 4ME Acuity and 4 independent Carbonites. In short, the routing, processing, and switching capability in the FR12 is very hard to beat. 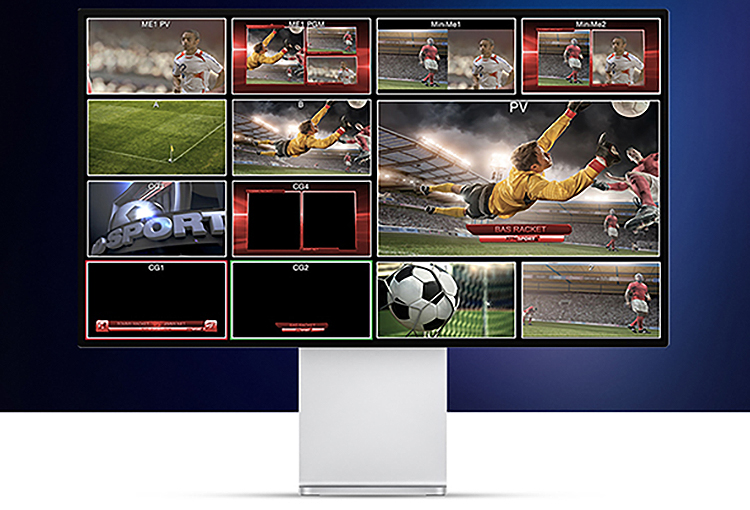 The FR12 has rich multiviewer capabilities.

Riggs continued, “In the past, a traditional system could use around 500 rack units.  Now with the FR12, you’re looking at only 14 rack units for the equivalent solution. That’s over 500 less rack units and freed up space for your business to grow. Less hardware also means less power consumption, so while a typical system could consume 52,300 Watts, the FR12 equivalent system would only consume 2,400 Watts. Less hardware also means far less cabling  hundreds instead of thousands  and significantly less weight as the FR12 tips the scales around 100 lbs or 45 kg as opposed to a traditional system’s massive 6284 lbs or 2850 kg!”.

In addition, as the FR12 is the world’s only router with an integrated production switcher, customers can build entire infrastructures with ground-breaking flexibility, performance, and integration.

Todd Riggs concluded, “The award-winning Ultrix platform just got bigger, smarter, and more powerful as the FR12’s compact frame packs a massive punch with significantly more capacity, functionality and innovation. The FR12 also represents a major enhancement to the current Ultrix product portfolio and the capacity increase of the frame means Ross Video now addresses and can meet even more of the worldwide router and multiviewer market’s requirements.” 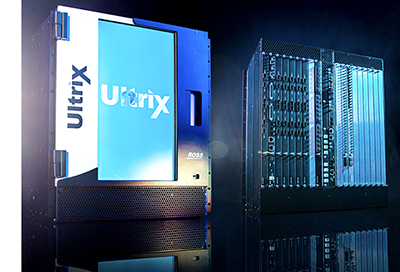 More information on the Ultrix FR12

Powerful audio processing and routing fabric
Up to 6k x 6k audio routing and processing fabric comes standard with Ultrix. Up to 6k x 6k embedded, and 2k x 2k discrete audio (through use of the AUX ports) supported. Route, process and configure down to a mono channel, regardless of I/O. Add the optional Ultrimix-MXR license to the fabric and a virtual, fully routable audio mixer is enabled bringing unique, one of a kind, audio flexibility and capability to the Ultrix chassis.

Robust hardware
The multiple patents awarded hardware design is based on attention to little details. From the sophisticated thermal management, locking card guides and edge connections, advanced internal smart fabric and more, the Ultrix 12G Router has been designed to perform in the harshest environments.

I/O Cards
Ultrix platforms are built with a modular input and output matrix to easily swap in unique I/O cards that build upon the Ultrix feature set. All these cards are compatible with each other on a single chassis and allow you to customise your Ultrix Connectivity Platform to serve as a 12G-capable router, multiviewer and signal processing platform, a hybrid-IP switcher or a signal-processing hub.