GER: T&M expert Rohde & Schwarz and Cadence have collaborated on a solution aimed at simplifying the engineering process from RF design to implementation and enhancing accuracy by using realistic signals for both simulation and testing. The new R&S VSESIM-VSS signal creation and analysis tool speeds up the development process for RF components. It is particularly useful for customers in the wireless, automotive, and aerospace and defense industries as well as for manufacturers of active components and systems.

To this end, Rohde & Schwarz has collaborated with Cadence Design Systems, Inc. to develop the R&S VSESIM-VSS signal creation and analysis tool, which supports all major standards such as 5G, the latest Wi-Fi evolutions and many more. The joint solution combines signal generation, design simulation and signal analysis, building on the strengths of either company′s popular and proven solutions. As a result, developers and design engineers benefit from an optimized tool that allows them to address design challenges earlier than before in the development process. 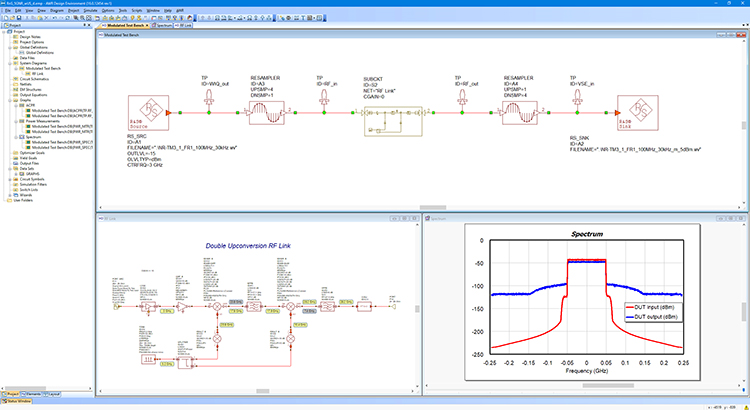 The new R&S VSESIM-VSS software tool speeds up the development process from RF design to implementation.

The data sink plug-in from Rohde & Schwarz provides access to the signal at any point in the design process. The signal can be transferred to a vector signal generator and applied to available hardware, enabling system level analysis of hybrid hardware/simulated implementations. An important feature of R&S VSESIM-VSS is support of direct digital predistortion (DPD) techniques to verify the effects of linearization already in the simulation phase of power amplifier development.

An added benefit of combining the solutions is increased compatibility between Rohde & Schwarz and Cadence tools. Signal generation and analysis provided by the Rohde & Schwarz solutions can also be used in other connected Cadence products such as the Cadence Microwave Office® circuit design software or the Cadence Virtuoso® RF Solution for radio-frequency integrated circuits (RFIC) and RF modules.

Christina Gessner, Vice President Spectrum & Network Analyzers, EMC and Antenna Test at Rohde & Schwarz says: “Connecting EDA design simulation and test and measurement helps our customers achieve first-pass design success and shorter times to market. Using realistic signals, deriving common figures of merit such as EVM and understanding linearization capabilities even before tape-out means a competitive advantage for our customers. We look forward to bringing the results of our cooperation with Cadence to the market.”