Riedel’s all-IP intercom solution up to the challenge 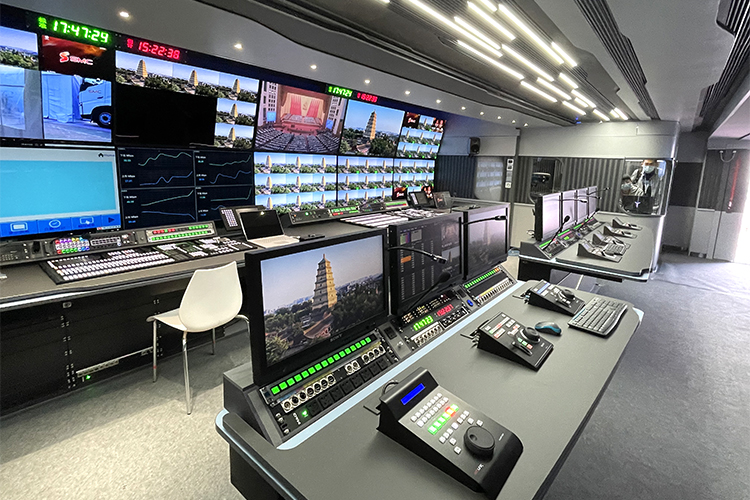 "The convergence of linear and nonlinear media and the migration of broadcasting to IP have brought greater complexity to production," said a representative at Shaanxi Broadcasting Corporation. "Traditional intercom systems aren't designed to handle the higher volume of signal connections and more complicated routing requirements associated with modern production, but Riedel's advanced IP-compatible intercom systems are up to the challenge. The Riedel Artist and SmartPanel systems integrate smoothly into the SMPTE ST 2110-based IP infrastructure implemented on this new van and, if needed, can easily connect to any other IP-based infrastructure."

The Shaanxi Broadcasting Corporation 4K OB van is equipped with a Riedel Artist 64 intercom matrix, RSP-1232HL and RSP-2318 SmartPanels, deployed in a spine-and-leaf configuration. The Riedel systems communicate with other devices via Layer-3 routing, which enables both resilience and flexibility in signal routing. The NMOS API running on Artist facilitates centralized control, while IS-04 and IS-05 support streamlines multicast routing for faster commissioning and system changes and a simpler overall workflow. To maintain synchronization, Riedel's Artist system locks reliably to the system PTP timing server, whether connecting directly or via a boundary clock. This feature also makes it easy for the OB van's intercom system to connect to other systems in IP mode.

The OB van's first assignment will be the live broadcast of the 14th National Games of the People's Republic of China, which begin on Sept. 15 in Xi'an, Shaanxi Province.

"We are honored to be providing a full IP-based communication system for Shaanxi Broadcasting Corporation and to contribute to the live broadcast of the 14th National Games," said Ms. Gao Jian, General Manager of Riedel China. "China is already at the forefront in implementing IP infrastructure for radio and television. Together, media convergence and the emergence of 5G have enabled China's radio and television broadcasters to take another leap ahead in this field. Riedel has been an intercom and transmission solutions provider for more than 35 years, and we're proud to be supporting China's advances in deploying IP-based systems."

Further information about Riedel and the company’s products is available at: