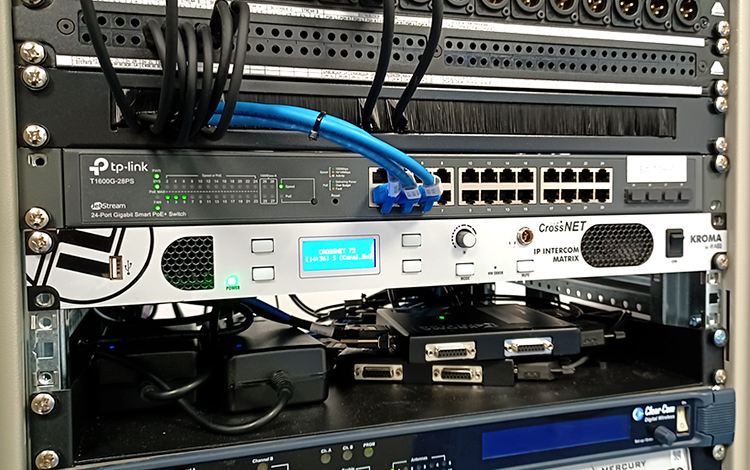 ESP: Canal Sur is public television channel of the Andalusian regional radio and television network. It was born with the intention of serving as an instrument of information and participation for Andalusians in the society, culture and politics of the country. It was also intended to be a medium for disseminating the historical, cultural and linguistic values of Andalusia.

Malaga, with more than half a million inhabitants, is the second city in Andalusia in terms of population and the center of the tourist Costa del Sol. For Canal Sur, the Territorial Delegation of Malaga in Avenida de Velázquez is of special interest, and from its two sets, TV programmes are developed on a regular basis, as well as being the headquarters of the thematic content distribution channel, so it has always been aware of the need to update its technical equipment.

To coordinate the Center's productions, Canal Sur decided to install a new Intercom System, with IP technology, to which all Canal Sur installations are migrating.  The heart of the system is the AEQ Crossnet 72 Intercom matrix, responsible for the distribution of audio signals between 12 TP8116 user panels in rack format, two of them with expansion panels up to 32 physical keys (128 virtual) and two TP8416, in desktop format, as well as two wireless user terminals based on Wi-Fi technology, Xplorer to provide service to users who develop their activity on the move, and three CE 6000X1 analogue concentrators to coordinate the cameramen.

The Intercom panels of the TP8000 and Xplorer series have several technical mechanisms for perfect intelligibility, in particular an echo canceller, a complete built-in audio processing system that allows parametric equalisation of the audio band and a dynamics management that adapts to the working habits of each user by incorporating noise shaping, and a DLP dynamics adaptor with expansion, compression and limiting functions.

They also incorporate other interesting functions, such as the recording of the last message received, to prevent occasional absences from the workstation and individual adjustment of the reception level of each incoming audio circuit.

In addition, the AEQ Crossnet matrix has additional audio inputs and outputs that can be carried by AES 67 / Dante IP audio or analogue audio to studio audio mixing consoles. As the audio from the Intercom matrix and IP panels is of the highest quality, it could eventually be used for transport or programme audio input.

AEQ Crossnet can also extend the coordination outside the center, through audiocodec systems or IP telephony, so that the studios are coordinated with the participants in a broadcast from the venue of an event.

The distribution of audio signals between the Crossnet matrix and the Intercom user panels is via IP audio protocol. The wireless panels communicate with the system via VoIP.

Provideo is a distributor of equipment and system integrator of complete solutions for the professional audiovisual market with 30 years of experience based in Andalusia. It has been in charge of developing the entire project, with installation, configuration, commissioning and training, in collaboration with AEQ's central technical services in Madrid, who worked remotely with Provideo to complete the project.