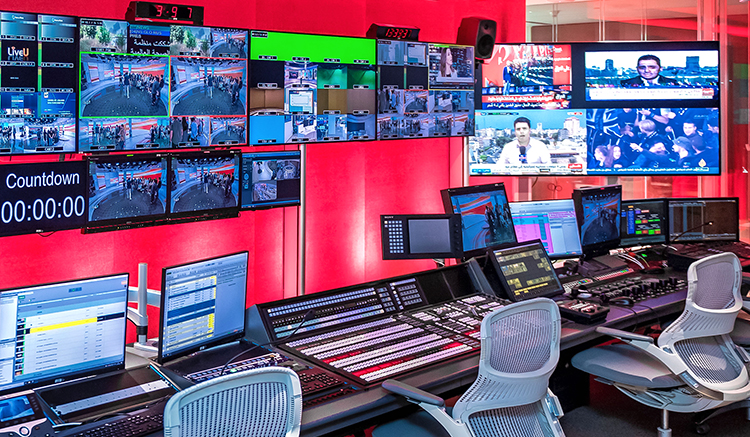 Asharq News is headquartered in Riyadh with central offices in Dubai International Financial Centre in UAE, and Washington in the US, and key hubs and studios in Cairo and Abu Dhabi. It also has regional offices and correspondents across key Arab countries and in major global cities, in addition to access to Bloomberg’s worldwide network. A winner of the prestigious BroadcastPro ME Innovative Project of the Year award, and recently announced nomination for the Excellence in Technical Installation and Supplier Innovation award in the esteemed Digital Studio ME Awards, it features many state-of-the-art broadcast components and is one of the first SMPTE 2110 compliant stations operating in the region.

As a pure IP deployment the Asharq News project illustrates the power and flexibility of IP systems when it comes to establishing new broadcast channels in the 2110 era.

At its heart is a complex transmission pipeline with a large number of inputs and outputs, and featuring approximately 80 ‘flows’ (video, audio, and ancillary data) per integrated channel device. 2110 inputs can come from any source - studio, camera, elsewhere -, while outputs include the main program output, dedicated outputs for YouTube (with and without graphics), clean outputs for monitoring, and more.

“The flexibility of the SMPTE 2110 approach meant we could iterate rapidly and adapt the workflow to meet our needs,” comments Omran Abdallah, Engineering Director at Asharq News. “We were already on air when subtitles were added to the chain within a day- ensuring no impact to our seamless on-air performance. In a traditional hardware implementation that would likely have taken weeks to achieve."

All changes to the system installed at Asharq News can be undertaken via a single user interface, ensuring the channel has an agile set up that is both responsive to market needs and future-proofed.

“We are delighted to have supplied our playout solutions to Asharq News,” comments Samir Isbaih, Pebble. “This is an important installation for the Middle East and elsewhere, as Asharq News’ integrations and features do far more than simply mirror SDI deployments in a much smaller footprint, they show the power and flexibility of IP-based workflows to continually iterate and bring agile flexibility to the continual evolution of broadcast channels that the market demands.”