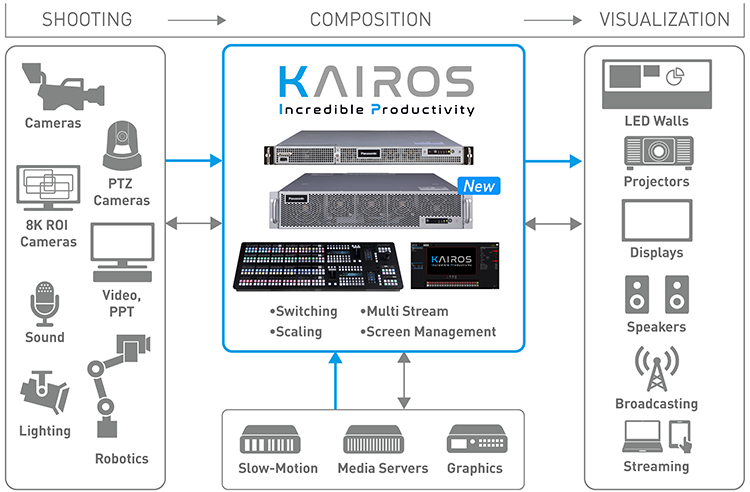 UAE: With virtual and hybrid events becoming the norm, broadcasters and production crews are met with the challenge of delivering audiences the same engaging experience on screen, whether they are attending in-person or remotely. Panasonic has announced new upgrades to its live video production platform- KAIROS offering improved functionality for video production and meeting the demand for a flexible but advanced solution from the burgeoning production industry in the middle east and Africa region.

The new KAIROS Core 1000 mainframe offers more processing power, thanks to increased CPU and GPU capabilities, and enables the platform to be utilised in a broader and more complex range of productions. Thus, pushing further its “unlimited video layers” concept and its capability to manage different scenes simultaneously and broadcast them via a variety of outputs. The GPU’s higher video processing capacity allows full use of the multi-layered video composition and output in high resolution - including 8K video.

KAIROS Core 1000 also expands the system’s standard outputs to 20 HD or five 4K outputs. Also, it offers 4K support and the CANVAS function as standard. The powerful Canvas feature allows the use of non-standard resolutions and formats, for example, making Kairos the best solution to drive 32:9 LED walls or 9:16 content for smartphones, on top of classic 16:9 outputs. With RTP/SRT/RTMP/RTSP streaming to eight inputs, KAIROS Core 1000’s video streaming capabilities have also increased.

With KAIROS Core 1000, the recording capacity of still images and videos (RAM players, clip player) has been significantly increased. The RAM player’s capacity (uncompressed) increases to 64GB, and approximately 170 seconds of HD video (or 42 seconds of 4K video) can be saved. The clip player (compressed) increases its capacity to 180GB. Approximately 55 minutes of HD video (or 14 minutes of 4K video) can be saved. A total of 12GB of still images can also be saved.