UK: Outernet, a global network of immersive media and culture districts designed to provide experiences for entertainment, brand activation and retail the likes of which have never been seen before will launch in London this autumn. It will feature the world’s first of its kind public atrium - The Now Building - containing an immense digital canvas: a 4-storey high, floor to ceiling, 360 degree, 16K screen surface - the most advanced of its kind on the planet. For the technical design of the large-scale and cross-media backbone for all event venues, as well as its delivery, vendor management and integration, Outernet Global Limited commissioned Qvest Media as Master Systems Integrator.

In the vibrant West End of London, right next to the new Tottenham Court Road Crossrail station, the first Outernet event space is currently under construction. More venues are to follow in major cities across the world in high footfall locations such as in New York, L. A., Asia, and Europe. With its event spaces, Outernet London offers a multifaceted symbiosis of out-of-home experience, entertainment, shopping, office units, as well as boutique, first-class hotels, and restaurants. One of the crowd pullers of Outernet London will be an immersive 16K resolution LED space which extends over 23,000 feet and is the largest of its kind in the world to date. Other highlights feature an underground live auditorium for up to 2,000 visitors, live studios and an event centre equipped with augmented and virtual reality.

"This part of the city has always been London's centre for culture and creativity. With Outernet, we are continuing this tradition and using the digital possibilities of the 21st century to create a completely new event experience for brand showcases, worldwide product launches and live concerts," says Philip O'Ferrall, President and CEO at Outernet Global Limited pictured.

As Master Systems Integrator, Qvest Media is responsible for the entire design and implementation of Outernet’s operations and data centre, and its technological networking. The operations and data centre is where the threads of the various venues in the 250,000 square-feet area come together. The engagement includes the design, construction, integration, and project management of the technical infrastructure, as well as the coordination of installation, testing and commissioning of the various project streams. Core component of the operations centre is a production facility with content scheduling, automation control and real-time playback, LED monitoring walls along with immersive L- Acoustics’ L-Isa immersive audio processing. Qvest Media furthermore integrates a cross-functional data centre (CAR).

“We conducted an intensive selection process for the technical integration of this unique project. Qvest Media’s understanding for our vision, methodical approach, and knowledge transfer during the process meant that they were the natural choice to deliver this installation for us,” says Mike Whittaker, Outernet Global’s CTO. 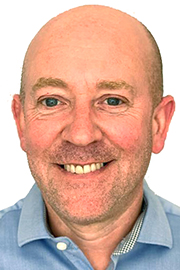 “For us, Outernet is no day-by-day media project,” says Simon Rich, Enterprise Account Manager at Qvest Media UK pictured. “The vision to create an unforgettable live experience combined with the most-advanced digital possibilities of today is both a challenge and a fascination for us. We are very happy that Outernet has placed their trust in us as their central technology partner,” Rich adds.

The close cooperation between Outernet and Qvest Media takes place in three successive phases. In phase one and two, the high-level and detail-level designs for the technological infrastructure will be developed in close coordination. In phase three, the project is implemented with the delivery and integration of the technical equipment for the central operation centre. The work is rounded off by intensive testing as well as training and support for the operational staff of Outernet London.