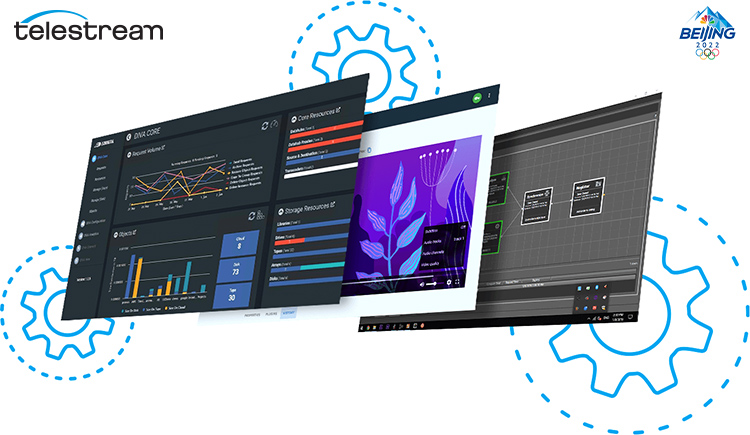 NBCUniversal provides coverage of the 2022 Olympic Winter Games from Feb. 2-20, featuring a Winter Olympics-record 2,800+ hours of coverage across NBC, Peacock, USA Network, CNBC, NBCOlympics.com and the NBC Sports app. The Opening Ceremony was presented on Friday, Feb. 4, live in the morning and again in primetime on NBC and Peacock. Similar to recent Winter Games, NBC’s primetime Olympic coverage began the night before the Opening Ceremony on Thursday, Feb. 3. Coverage began on Wednesday, Feb. 2, on USA Network and Peacock. NBCUniversal is presenting its 18th Olympic Games, 12th consecutive overall, and sixth straight Winter Games, all the most by any U.S. media company.

NBC Sports will utilize products and services from Telestream to create and deliver content of the highest quality for the Winter Olympics. The Telestream Vantage Media Processing Platform and the Cinnafilm Tachyon processing library will be used extensively to deliver the pristine quality frame rate conversions required.

NBC Sports will leverage Telestream’s Lightspeed Live Capture and Vantage to deliver a unique, mixed HDR/SDR conversion workflow for NBC Sports’ content produced in HDR. The NBC Sports Advanced Technology group worked with Telestream to develop custom color LUTs (Look Up Tables) that are used within Vantage to ensure the most accurate color processing pipeline throughout the production and postproduction process.

Guaranteeing the best quality images for viewers also requires testing and monitoring solutions with the highest level of performance and reliability. To maximize the quality of the formats, NBC Sports will leverage Telestream 4K/8K HDR Waveform Monitors that support easy alignment and confidence monitoring with both local and remote operation.

“At this Winter Games in Beijing, never before has NBC Sports embarked on an enterprise that has so many simultaneous formats, standards, or deliverable derivations to both normalize, convert, or orchestrate,” said Jefferson. “From applying custom LUTS for seamless single stream HDR/SDR productions, to re-wrapping growing files to make possible real-time collaboration, Telestream will make all those file-based workflows that our remote production rely upon, possible.”

“We’re providing more services and solutions to NBC Sports this year than ever before in our 17-year history of working together,” said Murray. “We continue to raise the bar over what has been achieved in years past. It’s a challenge that the entire Telestream organization looks forward to.”