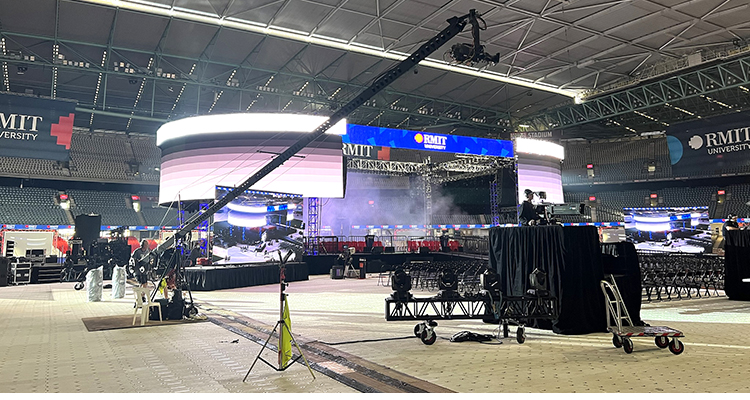 RMIT is a highly ranked, global university of technology, design, and enterprise. The school held its 2021 graduation ceremony at the sprawling Marvel Stadium in December. With the university's students hailing from more than 200 countries, live streaming of the event was important in enabling graduates' family and friends worldwide to share the moment.

MyEvent received the project assignment just five weeks before the event, creating very tight timelines for planning and implementation. With a much larger scale than MyEvent's typical projects, the team needed to quickly expand its equipment roster.

"We were tasked with getting live streams of feeds from all 21 presentation stages out to the world," explained Duncan Underwood, Live Streaming and Production Manager at MyEvent Productions. "The most we had ever done before was four simultaneous live streams, so we had to bring in additional products." 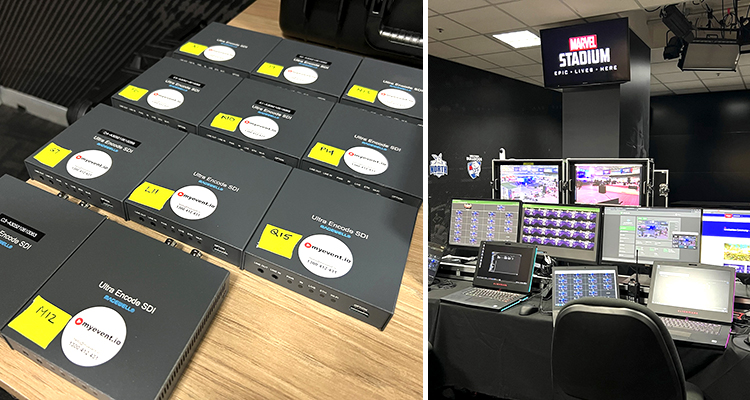 MyEvent had previously used Magewell solutions on a smaller-scale project for point-to-point delivery of SRT streams. This successful experience, along with recommendations from industry peers, led Underwood to choose Ultra Encode for the RMIT event. "I'm always talking to other professionals about their experiences, and the Magewell name keeps coming up as a trusty product," he recalled. "So even though the Ultra Encode product itself is fairly new, I had no hesitation in buying multiple units for this project."

Magewell devices are distributed in Australia by Corsair Solutions. MyEvent now owns 17 Ultra Encode units, and hired additional Ultra Encode devices from another production company — also a very satisfied Magewell user — to round out its needs for this project.

During the graduation event, multiple vision switchers combined live camera feeds and PowerPoint presentations from each stage. SDI outputs from each switcher were routed to the Ultra Encode devices, which encoded them into high-quality, live H.264 streams for viewing through RMIT's multiple YouTube channels. 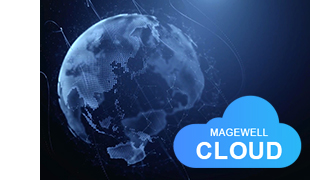 MyEvent also took advantage of the newly-introduced Magewell Cloud management software to centrally monitor the status of the Ultra Encode units and easily access individual devices' web-based dashboards as needed. "Magewell Cloud is an exciting development for us," noted Underwood. "It was very useful for the RMIT event, which required us to closely monitor the infrastructure for so many devices and streams."

The Magewell solutions performed flawlessly for MyEvent during the RMIT graduation event, and Underwood praises their ease and reliability. "Our out-of-the-box experience with Ultra Encode for this project was 100% gold," he said. "We had no issues at all. It sounds cliché, but they really do 'just work.' We've tried products from other major brands before and had multiple issues, but Magewell has been very good."

Underwood also loves the feature-richness, cost-effectiveness, and versatility of the Ultra Encode devices, and looks forward to using them on future events. "Nobody else in the market is doing what Magewell is doing with the feature set and price point of Ultra Encode, making them an easy choice," he said. "While we bought them specifically for the RMIT project, they're so flexible that there's lots more we can do with them, and they're now our 'go-to' solution."