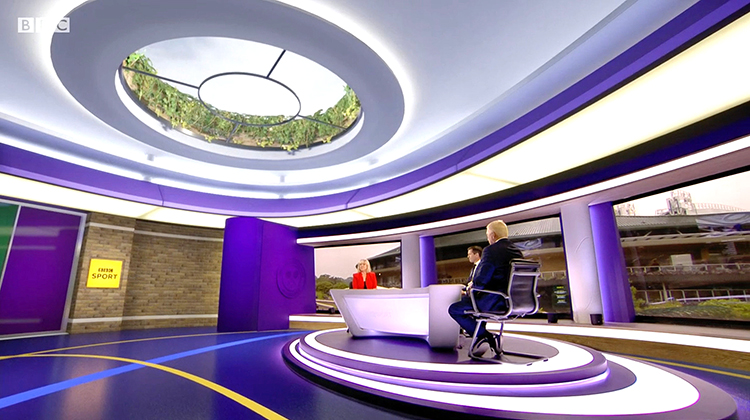 UK: MOOV, leading sport & events graphics company based in the UK, gave an eye-catching new look to BBC Sport’s on-site studio at Wimbledon, which also offered new ways of interacting with the audience and delivered enhanced storytelling during the Championships. To do this and, instead of rebuilding the physical set, MOOV and BBC Sport decided to virtualise it to take advantage of the infinite possibilities that virtual technology provides. So, MOOV partnered with Brainstorm to deliver the most advanced virtual set and AR features available based on the company’s InfinitySet virtual studio application and integrated with Epic Games’s Unreal Engine.

What started as a discussion concept between BBC and MOOV before the cancellation of Wimbledon 2020, developed into a full-blown project as a result of a drive to maximize the available time ahead of the 2021 Championships, bringing the focus onto the virtual facilities rather than BBC Sport to rethink the way the coverage was managed and so provide better stories, data and graphics.

Built around a green screen studio, the Wimbledon studio virtualisation effectively extended the space available far beyond its physical limits, providing new virtual spaces around the real desk, which in effect created a 360 studio. There were also new and alternative camera angles, more room to add infographics, and of course additional Wimbledon branding. The added bonus was the flexibility to change, adapt and make adjustments on demand that InfinitySet provided.

“We managed to create a virtual space that allowed for a dynamic coverage of the tournament which seamlessly combined real and virtual imagery in a way that significatively enhanced the story and audience engagement” says Nev Appleton, Director and Co-Founder at MOOV. “This was a particularly challenging project, not only due to the time constraints, but also because of restrictions on people on-site as well as technical issues such as the requirements to re-purpose the studio for the daily highlights. But, despite the challenges, the really great results reinforced our commitment to use virtual technology for enhancing live events”. 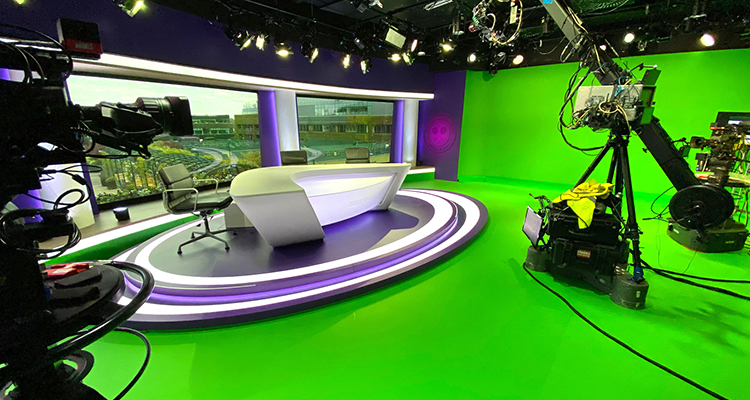 The project had to be produced in record time, as the set designs were available only at the end of April 2021. MOOV worked closely with BBC Sport as well as with a team of talented artists, and also relied on Brainstorm’s InfinitySet to create the virtual set and AR tracking, using Unreal Engine. As the studio had five cameras, including pedestals, jibs and PTZ, to ensure the output quality required, each camera was equipped with a Brainstorm InfinitySet system with Unreal Engine. The final output combined the real set with a desk for the presenters, with actual windows looking out to show the courts, and integrating the virtual world to enable the graphics and AR information to be displayed on demand.

David Alexander, Brainstorm’s Commercial Director, adds: “Together with Paul Vanlint of Storm Broadcast, our reseller in the UK and Ireland, we’ve worked with MOOV on a number of projects but what was done at Wimbledon 2021 was at another level altogether! MOOV have a really talented team who have an in-depth knowledge of our products and how to get the most out of their rich feature sets and capabilities, whether it’s the InfinitySet or our Aston 3D motion graphics system, through to our Neuron, which integrates graphics and their management into NRCS systems. So, we were very pleased to work with the MOOV team on the BBC Sport project for such a prestigious and world renown sporting event”.