USA: An Arkansas broadcaster is among those to deploy Dielectric’s RFHAWKEYE system for RF monitoring, providing station engineers with a comprehensive view of RF system health beyond the transmitter. Little Rock ABC affiliate KATV-TV installed RFHAWKEYE along with a new transmitter late last year, and immediately recognized how the IP-based system removes the barriers of decades-old legacy monitoring procedures that were both time-consuming and rife with guesswork.

“We knew that there was potential trouble in the transmission line or the antenna if there was a significant increase in reflected power, but smaller, localized changes were not caught - and often too late to prevent damage,” said Mooney. “Our only option was to use a network analyzer to perform a full sweep of the line to identify and locate the problem. That is a very time-consuming process. Not only does it require a rigging crew to climb the tower but the station engineer, or RF consultant, must open very heavy transmission line components. It means working above your head and turning wrenches from a ladder while pulling apart the line. No one enjoys doing that, but it was the only way.”

RFHAWKEYE changes that for broadcasters. The real-time, IP-based system discerns small yet potentially damaging changes in the transmission line while the station is on the air. It also provides insight into performance trends over time, helping engineers predict and address problems before significant damage and downtime occurs. This is thanks to the continuous time-domain measurements of all post-transmitter RF passive components.

Engineers can now also understand and pinpoint the exact location of the issue - all from a computer or cellphone using RFHAWKEYE’s user interface. If the local engineer is not familiar with the Time Domain Reflectometry (TDR) measurements, the system can be monitored remotely by a Regional or Group Manager as well as by Dielectric engineers.

“RFHAWKEYE allows us to monitor line arcs and degradations along with forward and reflected power, which by default helps us understand antenna health,” said Mooney. “If we have high reflected power but there are no arcs or degradations in the line, we know that something is off with the antenna. The ability to prove there aren’t any issues in the line is a huge step forward.”

RFHAWKEYE recently proved its value when put into action following a serious weather event that affected the RF chain. The tower took a direct lightning hit at the start of the year, taking out antenna obstruction lights and a generator while also damaging the generator’s automatic transfer switch. More urgently, a microwave system went down, taking the station off the air.

“We got the microwave up fairly quickly, but then realized that the transmitter had a high amount of reflected power after the lightning strike,” said Mooney. “This was shortly after we installed RFHAWKEYE, so we worked with the Dielectric team to review historical and trending data.” 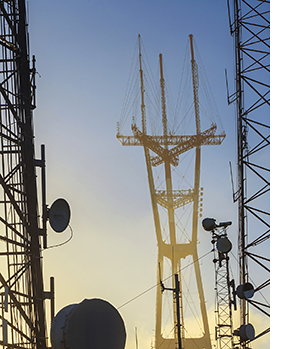 Upon review, it was very quickly confirmed that there was a 1.4 to 1 mismatch with reflected power. “We correlated the time with the transmitter log, and we were able to pinpoint that the strike was where the problem started,” he continued. “At the same time we were troubleshooting that problem, RFHAWKEYE confirmed that there was nothing wrong with the line, and the problem was in the antenna. There was no need to break the line apart section by section, and no need to calibrate everything and sweep the line. After the antenna repair, the RFHAWKEYE TDR display returned to the original stored baseline. The amount of time we saved on troubleshooting was astounding.”

Mooney shares that the RFHAWKEYE system comprises three parts. The first is a coupling unit at the RF facility, which includes the directional couplers and probes for monitoring line degradation. That is essentially a piece of transmission line that connects to RFHAWKEYE’s signal processing unit and central monitoring unit, which reports the data to the end user over RFHAWKEYE’s user interface. The workflow is not only handy for weekly system health checks and real-time troubleshooting; it is also useful for predictive maintenance. RFHAWKEYE can also be integrated into the transmitter’s interlock system or remote control via SNMP to provide shut-down once settable fault conditions occur.

“Every connection where the transmitter line mates is a potential failure point, which is one reason why a full line sweep is so time-consuming,” said Mooney. “Even the most subtle variations in time-domain measurements point to a problem that has likely been occurring for some time. RFHAWKEYE lets us review past data to see when a specific line degradation started. That helps us get in front of a potential burnout that takes the station completely off the air. We can pinpoint the exact area of the problem and point the tower crew to the exact location on the tower they need to climb. That kind of detailed visibility can save the station a ton of money when constrained to a window of maintenance work.”