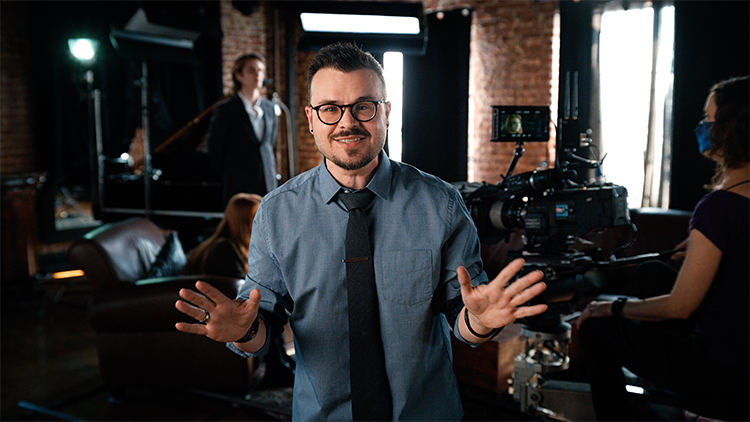 Customers can view the launch event on demand at the Frame.io website and sign up for the beta now. Frame.io C2C will be available this spring to all customers at no additional cost.

Frame.io C2C provides two unique services. First, C2C enables instant proxy uploads the moment cameras stop rolling so editorial can begin within seconds of calling “cut.” In addition, Frame.io C2C can live stream footage to an authorized user’s device on or off set, allowing customers to watch production as it’s happening. This is ideal for productions working during COVID, as it greatly reduces the number of people needed on set. Frame.io C2C lets editorial and other traditionally linear parts of the creative process happen in parallel while footage is still being shot.

Getting footage from a camera into post-production is a time-consuming process that requires backing up files, transferring them to a hard drive, and shipping them to another facility. Frame.io C2C eliminates that, letting customers simultaneously view a live stream of footage as it is being shot, while automatically capturing and uploading proxies as soon as the camera stops rolling.

The camera-to-cloud workflow requires a Frame.io C2C-certified device connected to compatible cameras from Arri, RED and Sony. Once authenticated, certified devices such as the Teradek CUBE 655 and Sound Devices 888 or Scorpio recorders will record, encode, and send timecode-accurate H.264 proxy files with matching filename metadata directly to Frame.io via an encrypted and secure connection using LTE, 5G or WiFi. This allows for near real-time delivery of editable proxy files to a producer, dailies facility, or editor anywhere in the world.

“Frame.io C2C is disruptive technology that changes the traditionally linear filmmaking process, allowing both on-set production and remote post-production teams to work together at the same time,” said Michael Cioni pictured top, Global SVP of Innovation at Frame.io. “This level of collaboration brings creative teams together and allows them to work faster and more collaboratively than ever before.”

In addition, Frame.io users with proper authentication credentials can view a live stream of footage while it's being shot from the comfort of their computer, iPhone, or iPad - whether they are on set or halfway around the world. This lets collaborators instantly share ideas to help bring their creative vision to life, while everyone who needs to track production progress can stay informed.

“In today’s socially distanced world - where remote work has become the norm and the number of people on-set is limited - Frame.io C2C is a game changer,” said Emery Wells, CEO of Frame.io. “Camera to Cloud gives film, television, and commercial productions a seamless new way for creative teams to do their best work, no matter where they are.”

Frame.io C2C features best-in-class security with full TPN and SOC 2 Type 2 compliance. Created by the MPAA and CDSA, TPN is the global, industry-wide initiative that defines requirements and best practices for protecting content. Combined with rigorous access controls, Frame.io C2C is an incredibly safe way to share media with authorized viewers and collaborators.

Pricing & Availability
C2C features are included at no additional charge for customers with a paid Frame.io account. Flexible, new monthly enterprise plans let customers and studios purchase the service they need for the duration of their production.

Frame.io C2C is currently in beta and will ship this spring. Customers can apply to participate in the beta program at the Frame.io website. Live streaming features will be available later in 2021.

Frame.io is the world’s leading video review and approval platform with over 1 million users. Integrated with most major professional video tools, Frame.io streamlines the creative process by centralizing assets and feedback in the cloud. This allows remote creative teams to collaborate securely and in real time from anywhere in the world.