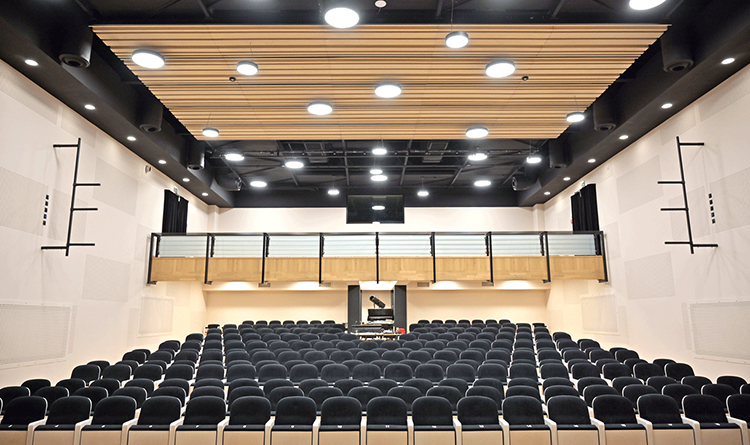 ESP: The building of the Zamość Culture House in Poland (Zamojski Domu Kultury) after over half a century since its creation, was thoroughly modernized. Recently the first stage of modernization has been completed and consisted in modernization of the interior of the object and covered mostly the auditorium (main events hall) and its surroundings, among others the balcony was created, the total capacity of seats was increased and is currently 413, there were installed also new seats (armchairs), new lightning and also new advanced and modern sound system. The official opening of the modernized auditorium took place at the beginning of September 2021 involving participation of town and regional authorities.

Sound system of the auditorium

The stage sound system of the event hall was designed based on CODA Audio loudspeakers, taking into account the architectural qualities of the auditorium, providing even more sound coverage of the whole area and to minimise the risk of sound reflections. Such system is going to enable implementation of various cultural events, musical concerts, theatrical performances or conferences.

The system in based on TiRAY system consisting of two clusters - 8 modules per side, supported by SCV-F. The system is complemented by D5-Cube working as front fills and HOPS8i, installed under the balcony.

The system is powered by Linus10C and Linus14 connected with the transmission system based on Dante network by digital inputs AES/EBU.

TOMMEX as Authorised Dealer of Yamaha Professional Audio and Premium Mixers delivered first in Poland live & rental mixer RIVAGE PM3, the new generation of digital mixing system which is going to be utilised during organized events and concerts.

The signals for the amplifiers are supplied from the YAMAHA CS-R3 console together with the DSP-RX, which will be used during events and concerts taking place in the hall. The system is complemented by RIO 3224-D2 and TIO16 / 08 analog-digital converters. Transmission of audio signals between individual locations of the sound system in the room and control of devices is carried out using network devices located in the main rack of the sound system in the technical room. The main console system is configured so that it can be used as a mobile solution.

The auditorium was equipped with advanced intercom system and stage direction system based on AEQ solutions.

The heart of the system is the intercom matrix CrossNET 40, which is responsible for the audio signal distribution between the rack-mounted TP8116 and desktop user panels TP8416, as well as the Wi-Fi based wireless beltpacks AEQ Xplorer and can be used not only for audience paging but also to broadcast for example, narration or voice over.

The system enables communication between stage of sound and lightning engineer, stage manager and wireless modules, that in connection with access point can be used individually during external events with utilisation of the mobil sound system.

Also designed, the mobile sound system intended to be used outside of the center, based on N-APS, an ultra compact dual 6.5”, 2-way arrayable point source that combines the versatility of a point source with the perfect array ability of a line array - 6 pcs.

The system enables suspension of the full range speakers or installation on tripods. The SCV-F (4 pscs) and powering system enables cardioid or surround mode for the subs. The system is powered by Linus14D.

AEQ are sure that the audience is going to enjoy and appreciate the highest quality and clarity of sound  provided by advanced new generation systems.