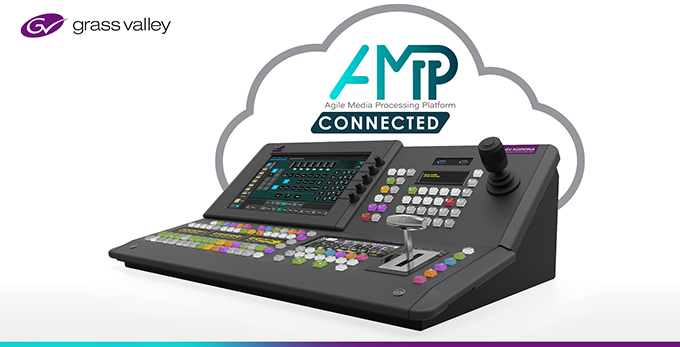 CAN: Grass Valley announces the next step in cloud-first production solutions with the introduction of GV K-Frame on AMPP, Grass Valley’s newly launched application suite for its Agile Media Processing Platform. The solution delivers a SaaS version of the K-Frame switcher engine - running on AMPP. Kayenne, Karrera, Korona, and KSP control surfaces maintain their well-known performance regardless of whether they are tied to a physical frame or to GV K-Frame on AMPP. GV K-Frame on AMPP is the latest in a range of AMPP-connected solutions that provide a seamless transition to cloud-based video production while extending the flexibility of existing solutions.

“Thanks to our customer-first approach to business, we understand the radical shift in buying patterns from hardware to software solutions. At Grass Valley, we have created technology that allows broadcasters and content producers to easily and efficiently make this transition to a unified cloud-production environment,” said Marco Lopez, General Manager for Live Production. “For those operating our switcher technology, such as technical directors (TDs), much of the switching is done by muscle memory. They know the panel so well that it’s like playing an instrument for them; their conscious attention can focus on the incoming video sources and cues to build a show, and the physical actions simply flow. Now, with GV K-Frame on AMPP, users can immediately transfer that intuitive knowledge - along with their existing show files - to cloud-based video production. We are proud to say that the first deployment of GV K-Frame on AMPP is on-air with a customer now.”

GV K-Frame on AMPP further expands the recently introduced GV Media Universe ecosystem, providing operators with the creative resources needed for professional media production in the cloud. With three M/Es and four keyers with 2D DPM per M/E, the solution uses the same UI and control surfaces as any other K-Frame solution. Stills and animations with fill/key including transparency also provide a polished production look that is easy to create, store and recall at the touch of a button from the hundreds of E-MEMs and Macros available.

AMPP-connected solutions can scale to as many instances as required without upfront buildout and deliver flexible I/O with access to any source on the AMPP fabric. Users also benefit from highly responsive and frame-accurate cloud-hosted performance - even when connected via typical residential Internet. Thanks to Grass Valley’s patented intelligent timing technology system operations are instantly responsive - even half a world away. The TD experience remains the same as users have come to expect from Grass Valley equipment.

Customers using AMPP-connected solutions are discovering new operational models as shows are securely produced with cameras on location and production personnel wherever they live across the globe. A recent event had cameras in various locations around Europe feeding back to an instance of AMPP located in an AWS data center on the east coast of the United States. The TD switching the live show was in California.

GV AMPP is the core technology powering GV Media Universe, a comprehensive ecosystem of cloud-based tools and services that revolutionizes the way live media is produced. The open ecosystem of connected devices, services, media content and applications give creatives familiar interfaces to comprehensive cloud-enabled solutions. The operator experience is also standardized, with application user interfaces all organized into common dashboards and controls.

The GV AMPP platform is cloud native and cloud-agnostic, while supporting the secure processing of video/audio in the public cloud on any of the major platforms, in a private, on-premises data center, or in hybrid topologies. This flexibility and power will bring about a significant paradigm shift in live content production, allowing shows to be produced on any engine from any location.

GV AMPP offers the most cost-effective models for cloud production available with pay-as-you-go pricing that’s calculated on usage rather than users so resources can be shared among as many people as needed to accomplish the task. Automatic monthly caps limit hourly billing to a monthly maximum regardless of how much the system is used.