USA: Since COVID seized the world 18 months ago, journalists and talent have been finding new ways to broadcast outside the studio. Many of them have turned to Comrex LiveShot. While LiveShot is highly portable and was originally designed to be carried around during live field broadcasts, it’s also become a fixture in home studios.

LiveShot is a bonded IP solution that sends live audio and video over a wide array of IP networks. Built on CrossLock technology, Comrex’s state-of-the-art suite of reliability tools, LiveShot is able to use even the most marginal 3G/4G and Wi-Fi networks to send clear audio and video with latencies as low as 200 mS. LiveShot has been used by TV stations, networks, sports franchises, and government organizations for a wide range of applications, including sports coverage, live newsgathering, political events, and more.

Live weather, from the living room
Even though many of us are staying inside, we still need to know the weather. The Duluth News Tribune reported on the ways in which TV journalists in Duluth, Minnesota are staying connected and providing sports, weather, and news coverage from outside the studio.

Adam Clark, weatherman for local NBC affiliate KBJR, is one of those who is providing his reports from home. “I’m just glad to have a job that will let me do this,” Clark told the Tribune. “That they care enough to lower the headcount (at the station).”

Clark’s setup includes a LiveShot, configured to use both 4G and internet to connect with headquarters. He also has three lights, a camera, tripod and laptop. He’s blocked windows with a blanket to prevent glare, and has set up a TV monitor to show graphics. “It looks like I’m in the studio,” he told the Duluth News Tribune.

Visual radio from anywhere
The Thom Hartmann Program is a radio talk show aired on stations across the United States, as well as on SiriusXM. It’s also simulcast on Free Speech TV, a news and opinion network carried by Dish, DirecTV and cable systems across the country. Because the show runs Monday through Friday, Thom Hartmann and his team need solutions that can get them on the air from anywhere.

“When we began video streaming the show, we purchased a Comrex LiveShot,” Hartmann told Comrex in an interview. “I’ve now used it to broadcast the show from Denmark, Iceland, all over the United States - not to mention from my home studio.” 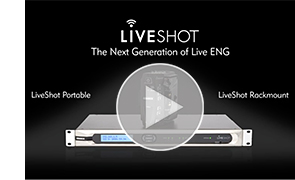 “I’ve found LiveShot extraordinarily easy to use. It’s lightweight - I can even take it on an airplane in a small carry-on bag,” said Hartmann. “I also use the LiveShot Connect smartphone app, which allows me to check bandwidth and latency statistics from my phone. It’s all the functionality of a TV studio in a single box.”

Want to learn more about LiveShot? Visit the site, or contact us at: info@comrex.com