AUS: FUJIFILM has announced the development of the FUJINON HZK25-1000mm (HZK25-1000mm) broadcast zoom lens, which boasts the world’s highest 40x zoom and the world’s longest focal length of 1000mm.

The HZK25-1000mm is a box-type broadcast zoom lens in the dual format, supporting two types of large image sensors. It can be mounted on cameras equipped with the Super 35mm sensor or the even larger sensor equivalent to 35mm full frame. The lens achieves optical performance which exceeds 4K. It also facilitates the use of cinema cameras which is becoming increasingly common in the broadcast industry, offering cinematic visual expressions such as shallow depth-of-field for beautiful bokeh in live coverage of sporting events and music concerts. The HZK25-1000mm is due to be released in the spring of 2023.

Today, in the broadcast industry, cinema cameras equipped with a sensor larger than the industry’s mainstream sensor are increasingly used in live coverage of sporting events and music concerts, amidst the growing needs for immersive cinematic expressions involving the use of bokeh and high dynamic range. However, cinema camera lenses are optimised for shooting movies and TV commercials, and therefore have a smaller zoom magnification ratio than that of broadcast lenses. They also require a specialist in focus operations, which is uncommon in the broadcast industry. For these reasons, there has been a demand for a high-magnification zoom that supports a large sensor and can be operated in the same way as box-type broadcast lenses. 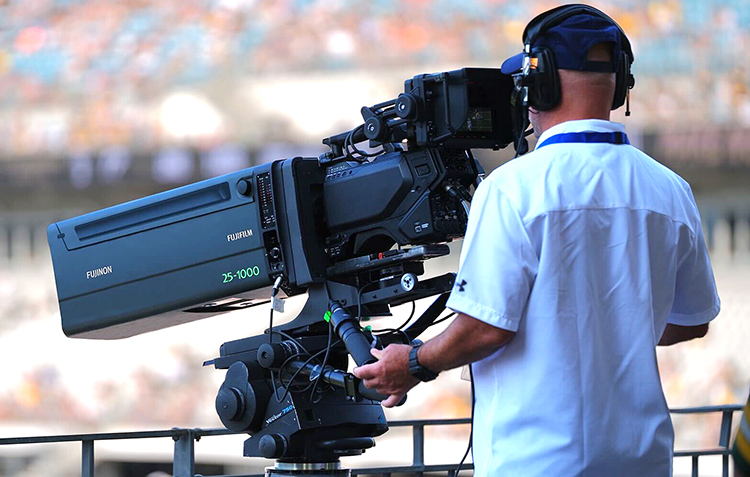 The new HZK25-1000mm is a broadcast zoom lens that uses optical technology, nurtured over many years, to deliver the world’s highest 40x zoom and the world’s longest focal length of 1000mm. It is designed in the dual format, supporting two types of large sensors. The lens normally works with the Super 35mm sensor, and also supports a sensor equivalent to 35mm full frame by way of activating the built-in expander to expand the image circle by 1.5 times. It offers the added benefit of maintaining the same angle of view in both sensors.

On the wide-angle side, the lens provides F2.8 aperture, enabling cinematographic visual expressions with shallow depth-of-field and resulting beautiful bokeh. The use of large-diameter aspherical lens and fluorite lens controls various forms of aberration thoroughly to achieve optical performance which exceeds 4K. The lens maintains the operation of broadcast lenses involving zoom demand and focus demand even when mounted on a cinema camera. It can also be used with a variety of existing accessories. Furthermore, the lens features an image-stabilisation mechanism based on FUJIFILM’s unique “ceramic ball roller” system to accurately compensate for on-set vibrations and wind-induced movements for operation stability.

Following many years of developing and supplying broadcast lenses that address broadcast camera operators’ refined needs, FUJIFILM became the first in the world to release a 4K-compatible broadcast lens in 2015. The company has since established a lineup of 8K-compatible broadcast lenses to lead the industry in raising video image quality. In the cinema industry, FUJIFILM began building its lineup of cinema camera lenses in 2009 with the launch of the HK Series. Of five lens series currently on offer, the Premista Series of cinema camera zoom lenses compatible with large-format sensors is embraced by frontline producers of movies and TV commercials due to its superior image resolution and advanced operability. FUJIFILM will continue to develop and supply high-performance lenses and accessories that facilitate their easy operations, thereby catering to the diversifying needs of frontline video professionals.

FUJIFILM will be showcasing the HZK25-1000mm in the InterBEE 2022 international broadcasting equipment exhibition at Makuhari Messe (Chiba Prefecture, Japan) from November 16 to 18, 2022.