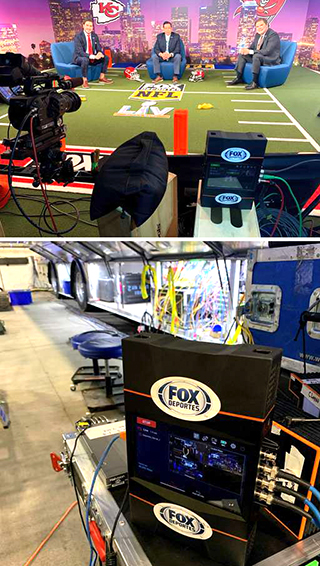 USA: FOX Deportes, the first and longest-running Spanish-language sports network in the US, was one of the earliest adopters of REMI production and of bonded cellular technology.  The production crew recently enhanced their typical workflow with the deployment of the LiveU LU800 field unit, to help enrich its production and programming for their Hispanic viewers in the United States.

The Challenge
As a division of FOX Sports, the production team works closely with their English-speaking counterparts to produce sports events, like the Premier Boxing Champions (PBC) every month. During an event, the FOX Deportes team takes the FOX Sports clean feed and cuts the program with their Spanish speaking announcers. The team would typically throw in a slate or filler content (recorded feeds) when the program cut to an English-speaking commentator, in order to keep their program version clean. This sometimes limits the team’s creativity to differentiate the English and Spanish speaking coverage and the continuity of the broadcast.

The Solution
The FOX Deportes team watched the LU800 new product announcement and immediately saw ways it could enhance their productions. “It’s such a unique product that enables us to cut down efforts. We can be more productive and cost-effective by grabbing the clean feed and sending three cameras from one device in synchrony. The LU800 has opened so many possibilities for us to be more creative in our live coverage of high-profile sporting events. We are confident that we will have the bandwidth, the quality, and now the 4 unique feeds from one device to keep audiences engaged and on the edge of their seats at home.” said Ruben Rocha, Director of Operations, FOX Deportes.

The ability to produce live events using a REMI production model will cut operational costs significantly. Leveraging something as flexible as an LU800 also leaves little to worry about when considering what bandwidth is in any given location, and cuts latency down significantly.  For their premier events, like Liga MX Soccer games, FOX Deportes would typically sends the entire ‘above the line’ and onsite crew to site for up to 70 matches.  With the LU800 and adoption of the REMI workflow, they will be able to cut down on site support by 50% this year.

The Big Game and What’s Next for the FOX Deportes Crew
The FOX Deportes crew were contracted by the NFL to produce four shows during Super Bowl week. Because the team could not travel due to restrictions, they created a set in their lobby and relied on the LU800 to produce the multicamera productions. “It worked out flawlessly and viewers felt like we were coming to them live from Tampa,” added Rocha.