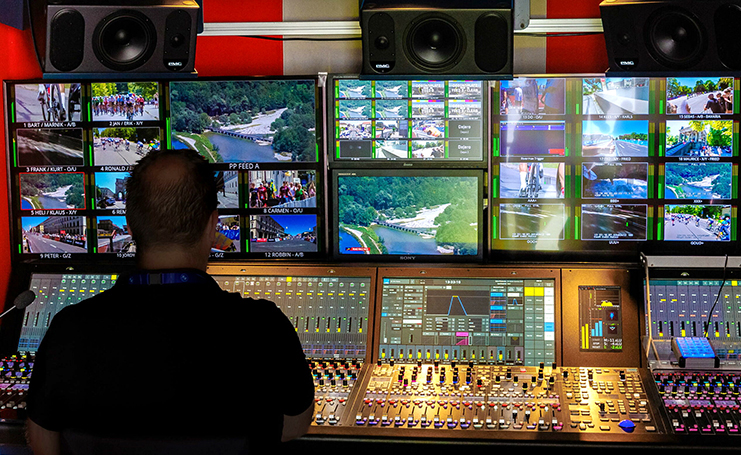 GER: A superlative sporting event has just finished: At the European Championships Munich 2022 from August 11-21 around 4,700 athletes competed in a total of 176 events in the sports of beach volleyball, canoe racing, climbing, athletics, cycling, rowing, table tennis, triathlon, and gymnastics. It was the largest event to be held in Munich’s Olympic Park since the 1972 Olympic Games. EMG was responsible for the live broadcast of the European Championships Munich (ECM) - one of the world’s biggest providers of broadcast technologies and media solutions for live broadcasts of sports and cultural events. For this sporting event, EMG used an AoIP setup from Lawo.

The nine control rooms, or galleries, in the International Broadcast Center (IBC), located in Munich’s Olympic Stadium, and one gallery for outside venues, were equipped with Lawo mc²56 MkIII Production Consoles to cover the audio production in the stadium (Athletics, BMX, mountain bike), the Olympia Park (medal ceremonies), Olympia Halle (gymnastics), and the remote venues.

Lawo’s mc²56 provides native support for SMPTE 2110, AES67/RAVENNA, DANTE (via a Power Core Gateway), MADI and Ember+. Local I/Os allow for direct connectivity. Powered by the 1U software-defined A__UHD audio engine with intuitive HOME functionality, up to 1,024 mc²-grade DSP channels per processing core can be shared among multiple consoles. This pooling option was applied to the ECM installation as a whole: Instead of dedicated audio cores, the required processing power for all mixing consoles derived from a cluster of eight shared A__UHD audio engines in a redundant setup, supporting flexible DSP assignment and reliability. 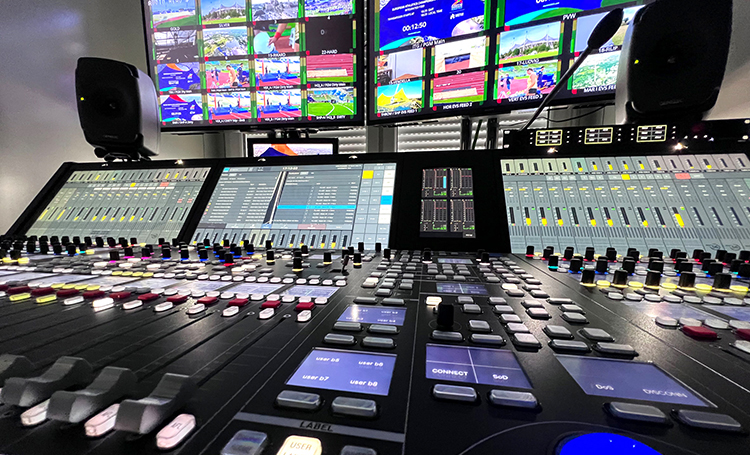 For an even further increased security, Docker containers in an also redundantly designed cluster of six servers hosted the mirrored software of the audio mixers. So, even if any gallery should have gone down, the whole system would have stayed functional, and the audio mixing could have still been handled outside the console.

For audio contribution, the setup comprised more than 30 Lawo AoIP stageboxes of the A__line WAN capable AoIP nodes. Employed were clusters of A__stage64 and A__stage 48, as well as A__madi4 and A__madi 6 plus A__mic8 units, dedicated to tournaments and ECM events. 35 Lawo C100 blades were in use for 130 multiviewer heads.

Guy Haegeman, EMG’s Multicam Audio Engineer, states: “EMG’s sports production services for the European Championships were certainly an outstanding event. Many tournaments were running in parallel. We had to cover them either in one location from different spots or in different locations. This meant that during the whole event we had to deal with an immense number of parallel feeds that needed to be monitored, switched and produced. When planning for Munich, we chose a networked Lawo AoIP solution with mc² consoles and A__UHD cores, providing us with the flexibility, DSP power and switching capacity we needed for our complex workflows. The cluster of A__UHD audio engines networked with all galleries also made last-minute changes in production manageable. When it became tricky, the Lawo team was always on our side to give support whenever needed!”

In addition, the infrastructure for the commentary sound was fully Lawo. A total of 65 Lawo LCU Commentary Units provided an intuitive user interface for up to three commentators per LCU, while Lawo-quality mic preamps and uncompressed (24-bit/48kHz) real-time Audio-over-IP ensured uncompromised audio quality.