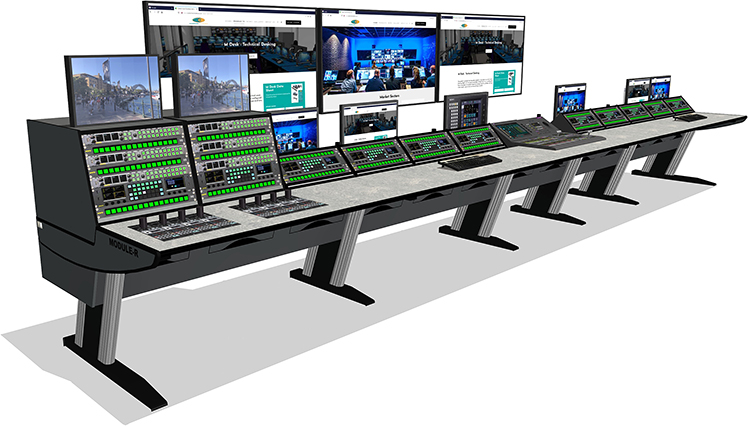 One of the 13-bay-width in-line Module-R desks produced for Elevate Broadcast.

"Custom Consoles' technical furniture has always proved a good investment, appreciated by operators and engineering-support staff as well combining good styling with a long working life," says Russ Jones who supervised the project on behalf of Elevate. "The project included nine desks to be installed among five television studios and two radio studios. All nine are based on the Module-R series which allows us to specify exactly what is needed both from an operational perspective and to fit the available space. A crucial factor for every desk is being able to accommodate relevant equipment, power cables and signal feeds while ensuring access from front and rear for routine maintenance. We specified and integrated a total of five TV studio control desks, two audio control desks and two radio studio control desks, plus a music studio desk, two transmission control desks and two studio interview tables."

"We normally install Module-R on site," adds Custom Consoles' Sales Manager Gary Fuller. In this instance, we shipped the various preassembled elements for integration by the Elevate team. That is routine for our EditOne and EditOne-Radio series, which are shipped as flat-packs, but was a first time for Module-R. Russ and his colleagues handled the build very professionally, as we were confident they would, guided by our reference documentation."

TV studio galleries 1 and 2 are configured as almost identical 13-bay-width in-line Module-R desks with 8U equipment pods above each of two camera operations bays and 3U pods further to the right. Both desk worktops were pre-cut to accommodate the control panel of a vision mix/effects switcher. Shared between the TV studio galleries is six-bay audio control desk with an inset audio mixer, a 13U-high floor-to-desktop equipment pod and three 4U desktop pods.

Elevate specified an eight-bay inline Module-R desk with 4U-high equipment pods above bays 1, 5, 7 and 8 for the third TV studio. A 13U-high pod is located below the right-hand bay. Audio mixer and vision switcher control panels are integrated into the worktop. Two additional TV studios are equipped with 7-bay inline Module-R desks, again with 13U supporting pedestals at each end. Both desks are fitted with four 4U equipment pods, a freestanding audio mixer and an IP-interfaced vision switcher.

Radio Studio 1 has a six-bay inline Module-R with a 13U supporting level pedestal at each end and three 4U-high desktop equipment pods. The Radio Studio 2 desk is a four-bay variant with an inset audio mixer and a supporting floor-to-desktop equipment pedestal. Largest of the audio-related desks is a 10-bay inline music studio unit with 13U supporting pedestals at each end four 4U-high desktop pods. A four-module digital audio workstation panel is mounted on the worktop.