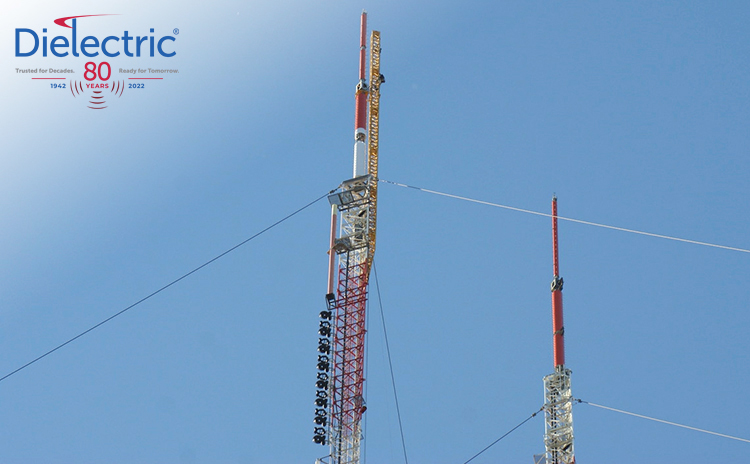 USA: Dielectric announces that WUCW-DT, a CW affiliate serving the Minneapolis-St. Paul market, is now on the air with a new Dielectric UHF antenna that reevaluates the traditional stacked antenna array design and brings simplicity and long-term reliability to the broadcaster. The challenging E-Type antenna design addresses current tower code requirements for exposed transmission line and was delivered in a modular configuration that simplified the antenna replacement project for Tower King II, which managed all site preparation and installation work. The carefully engineered system also retained the existing Dielectric repack antenna on the top position without requiring extensive tower modifications.

WUCW shares space with several broadcasters on the south tower at Telefarm Towers, a two-tower transmission site for TV and FM radio broadcasters. To optimize tower real estate and provide true omnidirectional performance for their viewers, WUCW and ABC affiliate KSTP-DT have long transmitted from a top-mounted broadband stacked antenna system. The original system included a Dielectric TU Series Deltastar panel antenna on the lower position of the stacked array.

WUCW’s existing Deltastar antenna was a “five around panel antenna” configuration supported by a very wide and robust mast. When the time came to replace the antenna, Dielectric knew that they were about to face one of the most challenging design projects of the company’s lifetime.

“WUCW engineers first considered making an adapter for the top antenna and the existing support system, but changed course toward preferring a modernized stacked array that was simpler and provided enhanced long-term reliability over the panel system,” said James Butts, Mechanical Engineer, Dielectric. “While that was indeed the result, the work required to get there made this one of the most mechanically unique UHF antennas we have manufactured. This WUCW antenna is a very large variant of our E-Type antenna design that was carefully engineered to meet the customer’s unique design needs.”

Design Challenges and Innovations
One of many challenges was how to run the transmission line to the top KSTP antenna. Previous revisions of design codes allowed Dielectric to run the line up the side of an antenna mast, exposed to the elements without increasing the mast drag coefficient.

“The latest code revisions required by Telefarm impose mast designs with exposed appurtenances such as transmission line with higher drag coefficients, which greatly increase wind loads,” said Butts. “We had to come up with an antenna feed system design that would obscure the transmission line without increasing the windload on the bottom antenna. That meant routing the feed to the top KSTP antenna under the radome of the bottom WUCW antenna.”

Dielectric designed a two-piece mast for WUCW that measures 20 inches in diameter and is two inches thick. Groundbreaking technology is utilized under the hood of this antenna to verify WUCW has an omnidirectional azimuth pattern in both the horizontal and vertical patterns. Typically, the azimuth patterns are distorted on a bottom of a stack antenna due to the transmission line to feed the top. This, along with the mechanical stoutness of the antenna, makes this a truly innovative achievement by the Dielectric team.

Modular Installation
To make Tower King II’s job easier, Dielectric split the new bottom antenna into two pieces, adding a flange in the middle. That allowed the tower crew to raise the antenna and split the lifting load on the tower and gin pole as the total antenna weight was close to 30,000 pounds, and later connect the two pieces using the carefully positioned flange.

“The biggest challenge mechanically was to keep the weight of those two sections low enough for a potential helicopter lift or a reasonably sized ginpole,” said Butts.

Kevin Barber, Owner and President of Tower King II, confirms that the replacement work was among the most unique of his career.

“The original Deltastar antenna was 32,000 pounds with a very tight guide path, and that made it very challenging to bring the antenna down with a ginpole without it bouncing off the tower,” said Barber.
“That basically requires walking the entire antenna down the tower, which is fairly difficult. We inserted a stabilizing frame between the two antennas, and then jumped the ginpole down to secure the Deltastar and begin the process of walking it down.”

The combined weight of the new Dielectric antenna is several thousand pounds lighter than the Deltastar, but would still require a ginpole to lift it as one piece. By splitting the new antenna into two sections, Dielectric gave Tower King II the option of using helicopters over ginpoles to lift the new WUCW antenna into place.

“We set the first section and then the second section, and then connected the bottom and top antennas with the transmission line,” said Barber. “In the end, the thought that Dielectric put into the design and the modularity made the installation very clean and easily achieved.”