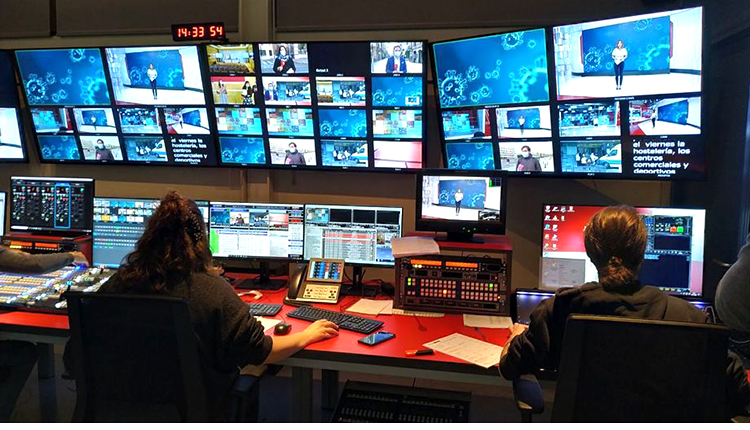 Complemented by a Systel IP 16 talk-show system for coordination and contributions from territorial and external centers.

ESP: The regional television of Castilla y León (a region in central Spain) is managed by the private company Radio Televisión de Castilla y León S.A., part of the Promecal media group. It began broadcasting in 2009 and operates two channels: La 7, with regional programming, and La 8, a channel with provincial disconnections in certain time slots.

Its main production centers are in Valladolid, where it operates two offices. In addition, it also has 10 territorial production centers located in the nine provincial capitals of the Community (Ávila, Burgos, León, Palencia, Salamanca, Segovia, Soria, Valladolid and Zamora) and in the region of El Bierzo (Ponferrada), as well as a delegation in Madrid.

Recently, on the occasion of the technological upgrade of its head office in Valladolid, an AEQ Crossnet 72 intercom system has been added to the studios, complemented with an IP talk-show system adapted to the technical coordination, the Systel IP 16, also from AEQ. The Dante IP connectivity communicates the 72x72 circuit intercom matrix with the 52x52 circuit Systel IP 16 matrix and the studio audio console, through 32 input and output circuits of each equipment.

The integration of the project has been carried out by EMCO, a leading company in audiovisual solutions in Castilla y León, which has a long history in the professional audio and video sector. They also offer a wide range of solutions and an integrated option, with a wide variety of products and services of the latest technology.

The heart of the system is the Crossnet 72 intercom matrix, responsible for the distribution of audio signals between the Kroma by AEQ TP8116 user panels located in the control room, AEQ Xplorer with WiFi technology to coordinate the people involved in a programme moving within the studio and in the hallways, and other external users connected through the AEQ Systel IP 16 IP talk-show system.

TP8000 Intercom user panels and Xplorer series have several technical mechanisms for perfect intelligibility, in particular an echo canceller, a complete audio processing system that allows audio band equalisation and dynamics management that adapts to the working habits of each user by incorporating noise shaping, and a DLP dynamics adaptor with expansion, compression and limiting functions.

They also incorporate other interesting functions, such as the recording of the last message received, to prevent occasional absences from the workstation and individual adjustment of the reception level of each incoming audio circuit.

In addition, the matrix has additional audio inputs and outputs that are carried by Dante IP audio to the studios' sound consoles. As the audio from the intercom matrix and IP panels is of the highest quality, they can be used for transport or programme audio input.

The distribution of audio signals between the Crossnet matrix, the matrix and the Intercom user panels is via the Dante IP audio protocol and, if required, over AES 67. The wireless panels communicate with the system via VoIP.

The matrix also provides off-site coordination, via Systel IP 16, so that studios are coordinated with participants in a broadcast from the venue of an event, or from a territorial production center.

Systel IP lines go to an IP telephony operator, NetelIP, which guarantees HD service (7 kHz bandwidth) in VoIP communications with provincial stations, reporters and other stable station contacts. Thus, circuits are established in Systel IP16 to provide return and external coordination, but also other direct circuits to the sound console to develop HD voice contributions with 7 kHz bandwidth, covering situations in which there is no better quality input channel for a report or a punctual or stable intervention from a home or any other place.

To separate these services, three Systelset+ user terminals are available. At a specific moment, each of them is assigned a part of the available lines and its operator establishes the service by generating or receiving the calls, either for external coordination or contribution, while carrying out the corresponding production work, consisting of interacting with the remote users and including or excluding them in the corresponding internal circuits to receive orders or enter the programme.