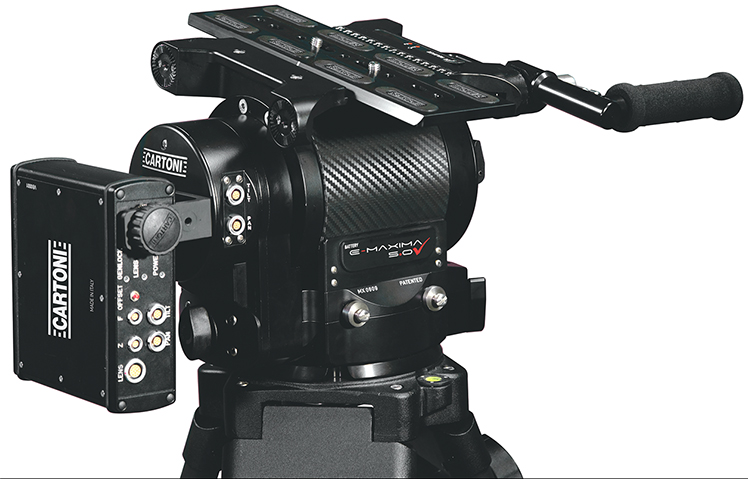 ITA: Cartoni Camera Supports announced that their professional flat-base fluid heads, including the Maxima, Master, and Magnum, will be encoded. By including the ability to encode, Cartoni's fluid heads will provide precise camera tracking information for VFX, Virtual Production VP and more.

The e-Maxima, e-Master, and e-Magnum encoded heads are the latest response to encoded support needed in VFX & Virtual Production. Strong and versatile, the e-series fluid head includes all the features of Cartoni's premium heads for digital cinematography. In addition, the e-series feature extremely high-resolution direct sensing encoders in both the pan and tilt. This allows absolute positioning without re-calibrating at start-up.

"Cartoni has been a pioneer in creating position encoded heads and encoded-ready heads" says Elisabetta Cartoni, President & CEO of Cartoni. "Ten years ago, we designed the e-Sensor head to track virtual environments. The e-Sensor has been followed by the e-Cube, e-Master 40, e-Master 65, e-Master 30, and e-Magnum, which is mainly utilized in virtual production and sports”.

“The first encoded heads we have produced were used as “pan bars” to control Remote Heads. These devices were moving the Cartoni e-Rem heads but were also used by renown manufacturers of Remote-Controlled Heads as, Arri, Service Vision, Movie Engineering, Mark Roberts, Opertec, etc. The success of the Cartoni e-heads is due to the accuracy of the position reading. The encoders are placed on the very shaft of the pan and tilt movements allowing no delay whatsoever”.

“Now that the evolution of VFX and VA technology, mainly driven by large studios, faces the nascent trend, motion pictures need more precise data gathering; we have further improved our encoding technology with the latest absolute encoders available on the market, with reduced size and high resolution at 4 million counts/turn."

The Cartoni e-series is compatible with most 3D packages for real-time camera/scene movement in virtual sets and pre-visualization. Additionally, it is the ideal solution for sports 3D graphic insertions. These encoded heads are equipped with 4 million counts/turn absolute encoders for both pan and tilt and can also be integrated with lens encoders and other position sensors, making it a very versatile metadata provider in VFX and virtual production.