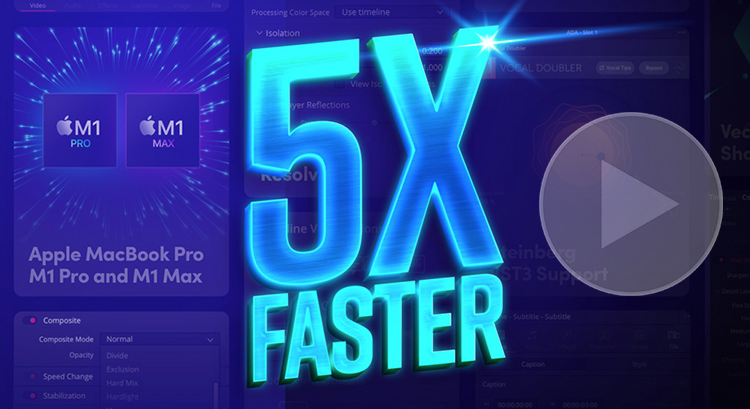 Now up to 5 times faster for 8K editing and grading on Apple Mac models with M1 Pro and Max,
plus Dropbox Replay integration and more!

USA: Blackmagic Design has announced DaVinci Resolve 17.4 which transforms the speed of DaVinci Resolve to work up to 5 times faster on the new Apple Mac models with the M1 Pro and M1 Max chips. With this massive speed increase, customers can now play back, edit and grade 8K projects even faster, and can work with up to 12 streams of 8K footage.

DaVinci Resolve 17.4 also adds Dropbox Replay integration. Projects will flow smoothly from DaVinci Resolve Studio directly to Dropbox Replay for easy video review and approval. Frame accurate colored markers, comments and annotations made in Dropbox Replay are almost instantaneously synced to the DaVinci Resolve timeline. Plus with a simple login, customers will only have to sign in once. Other features include quick and easy render set up with dedicated Dropbox and Dropbox Replay presets as well as automatic background uploads that are monitored for status and confirmed when complete. 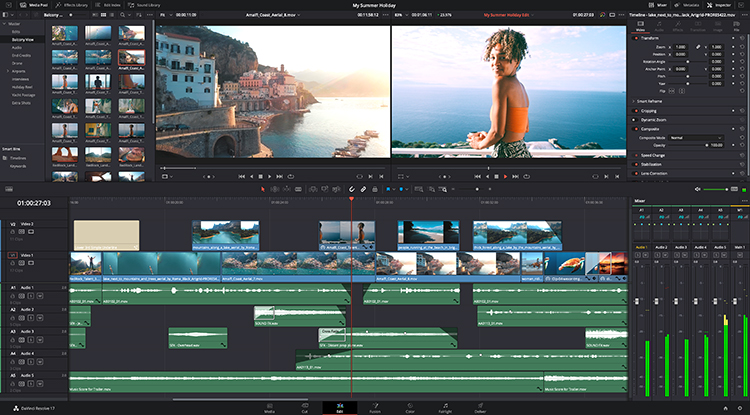 There are also improvements to the edit page such as better functionality for position curves in the timeline, so customers can more easily adjust the ease in and out points. This creates a more custom transition from one point to another when applying zoom or image position adjustments. Customers will also now be able to use DaVinci Resolve Speed Editor to switch between cameras in multicam clips on the edit page making it faster to cut programs together. Additional support for asymmetrical trimming allows customers to adjust a transition’s in point without affecting its out point or vice versa, enabling them to fine tune work more quickly.

With Fusion, customers get additional support for languages with combined glyphs and those that may write right to left such as Arabic and Hebrew. Combined with improved vertical layouts, rotation and line direction when working with Text+, this will enable customers to work in a wider range of languages and layouts.

DaVinci Resolve 17.4 adds greater support for automatic color management, making it faster and simpler to set up projects. Additionally, this update adds support for ACES 1.3, including gamut compression, so customers can now more accurately display wide gamut images to be certain they are getting the best representation of the source image. 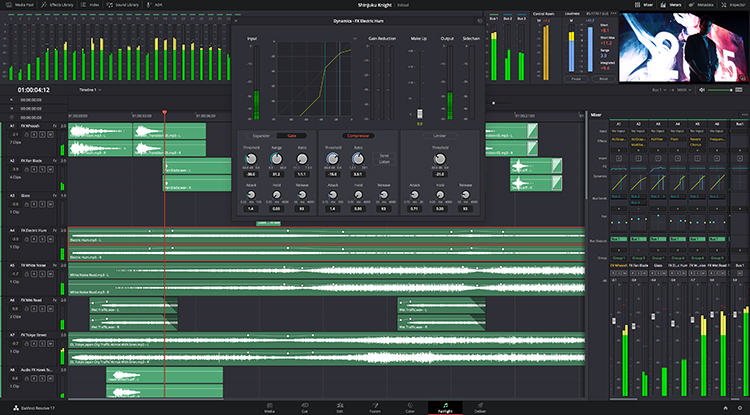 A new Resolve FX called custom mixer allows customers to combine effects and make adjustments to grades with finer control. Plus, a new 3D keyer adds the ability to make finer adjustments to the key and matte finesse settings to make it easier to create clean masks with more accurate keys and finer edges. For DaVinci Resolve Studio, there’s also a new film halation which will add the effect of a glow or light reflections around high contrast edges, giving images a more filmic look.

Fairlight audio now has support for Steinberg VST3 audio plugins, giving access to more audio effects so customers can create the perfect soundtrack. Plus, there are keyboard shortcuts or click and drag to reorder, move and duplicate effects in the Fairlight mixer, displays single sided audio transitions as fades and added support for multi channel audio outputs.

When finishing projects customers can now export projects with YouTube video chapters, improved encode settings for the YouTube render preset and the ability to use hardware accelerated H.265 on Windows.

“This amazing update gives customers massive performance gains on the new Apple MacBook Pro models with the M1 Pro and Max processors. It completely transforms workflows and unlocks some incredible creative potential. What’s exciting is simply by downloading this free DaVinci Resolve update customers will get all these features for free,” said Grant Petty, Blackmagic Design CEO. “To have the capability now to easily edit and color grade Blackmagic RAW 8K footage in HDR and all on a laptop while you’re miles away from the studio is incredible. Plus the ability to easily collaborate on projects with Dropbox Replay makes it such an exciting time for our customers to be out there creating content. We’re very excited to see what our customers can do with this amazing update to DaVinci Resolve.”

Availability and Price
DaVinci Resolve 17.4 is available now for download free of charge from the Blackmagic Design website.