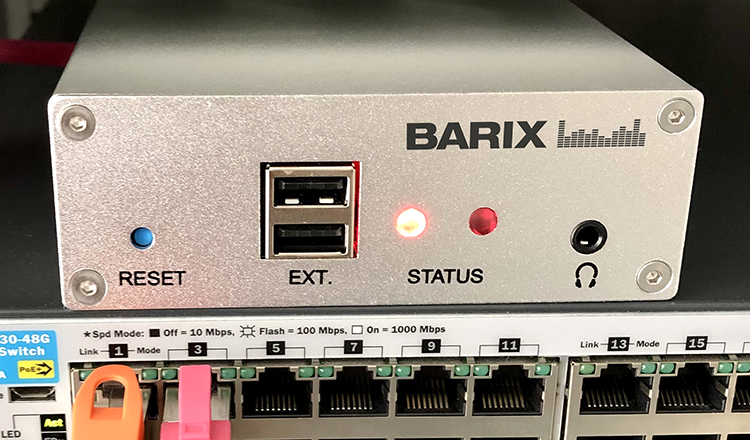 The new updates are available for all products in Barix’s IPAC portfolio, including the ultra-compact IP Former TPA400 decoder with 6.5W amplified output for four-ohm loudspeakers; the Exstreamer M400 decoder with line-level analog audio output; and the Exstreamer MPA400 decoder/amplifier with up to 40-watt audio output for two- to eight-ohm analog speakers. All Barix IPAC solutions combine robust integration capabilities with support for the latest formats and technology standards to form the most flexible and capable IP audio decoders on the market for applications ranging from emergency notifications to paging and background music.

The new scheduling features offer three types of scheduled audio playback. Recurring “fixed time” messages such as bells and time-specific announcements can be quickly and easily scheduled across a week, while “rotations” enable multiple messages such as advertisements to be played in a specified order and interval. Last but not least, playlists of files stored in the devices’ internal storage can be scheduled for background music playout. Scheduled playback can be prioritized relative to other decoder sources such as live streams and paging messages, ensuring that critical announcements such as emergency notifications and SIP calls will take precedence over scheduled content.

Of particular interest to systems integrators and third-party partners will be the IPAC family’s new REST API. The API lets developers seamlessly integrate IPAC decoders with their own custom management systems and software applications, controlling the Barix devices from the developers’ bespoke solutions. The API also enables local automated control of IPAC units from other embedded devices such as Barix’s Barionet series of I/O device servers.

The new 4-band parametric equalizer enables users to fine-tune the frequency response of the audio output from IP Former TPA400 and Exstreamer MPA400 devices, which connect directly to speakers without an external amplifier. Users can adjust the frequency, Q-factor, and gain for each band while setting different EQ curves for various sources – for example, boosting lows and highs in background music while cutting lows in higher-priority paging calls. Meanwhile, the new RTP forwarding feature enables the main audio output of an IPAC device to be streamed to a specified destination via multicast RTP. Additional IPAC devices in the same installation can be batch-configured to access and playout the forwarded content, making it easy to configure multiple Barix devices in the same installation to play out exactly the same audio as the first device.

“Our IPAC family of decoders and amplifiers is incredibly extensible, and we continue to expand these products with powerful new features that increase their value and versatility,” said Davide Nossa, Product Manager, Barix. “Functionality such as the new scheduler simplifies operations for end-users and administrators, while the new API and RTP forwarding features streamline deployment and expand the integration possibilities for installers and systems integrators.”