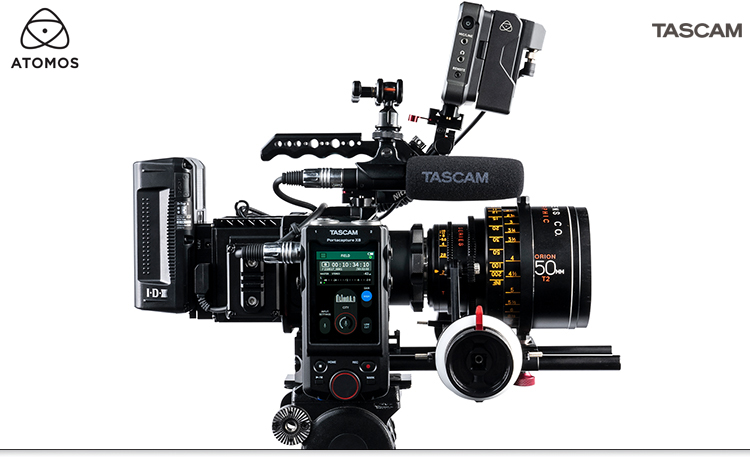 AUS: TASCAM and ATOMOS, a leader in helping video professionals cut through technological barriers, have announced the availability of wireless Bluetooth synchronization for the TASCAM Portacapture X8. With the addition of the optional TASCAM AK-BT1 Bluetooth® dongle for the Portacapture X8 and either the newly announced ATOMOS CONNECT devices, AtomX SYNC or Ultrasync Blue timecode sync adapters, videographers and audio professionals alike can now seamlessly - and wirelessly - synchronize the Portacapture X8’s 8-track recording capability using 192kHz/32-bit float point recording technology with a wide array of video cameras, including DSLR and Mirrorless models. The result is superior audio that enhances the visuals, fully synchronized for maximum flexibility throughout production.

Without timecode embedded into the audio and video files, the process of editing sound for picture is quite cumbersome, as the editor needs to visually time align audio with video. Syncing via timecode greatly helps the post-editing process by aligning files on a time basis, especially for projects using multiple cameras or recorders. Now, TASCAM and ATOMOS have solutions that address multiple production scenarios.

Used as the master timecode device, the ATOMOS Ultrasync Blue is an easy-to-use, low-cost, wireless timecode adapter that can synchronize any compatible camera and the Portacapture X8/AK-BT1 using ATOMOS AirGlu™ connectivity. With wireless Bluetooth transmission up to 30 meters for as many as six devices, the combined system provides greater freedom to shoot from creative angles using smaller, more mobile cameras.

This setup can be expanded with the addition of the ATOMOS Ultrasync One, which offers the flexibility to function either as a transmitter timecode server or as a receiver client device. Using the Ultrasync One as the Master Timecode source, a more sophisticated camera setup can receive a direct timecode feed while the Ultrasync One wirelessly sends timecode to the Ultrasync Blue, which in turn, can wirelessly feed the TASCAM Portacapture X8/AK-BT1 plus a variety of other devices.

For production environments using either the ATOMOS SHOGUN CONNECT, NINJA V or NINJA V+ to record and monitor on-set, the ATOMOS AtomX SYNC is yet another solution. Mounted to the rear panel of either the NINJAV/V+, the AtomX SYNC connects multiple ATOMOS devices, cameras, and audio recorders using reliable long range RF wireless technology. For example, when synchronizing with the Ultrasync One, the AtomX SYNC can also bring the TASCAM Portacapture X8/AK-BT1 and other devices into the synchronized system via wireless Bluetooth synchronization.

To facilitate wireless timecode synchronization via Bluetooth, the Portacapture X8 control app will be updated to include the tools necessary to use this new wireless sync function. Other commercial apps will also be compatible, including Apogee Metarecorder, Mavis Pro Camera, and MovieSlate 8 Logging.
To download the Portacapture X8 update, go to.

Yosuke Matsuno, TASCAM Business Unit Manager, commented on the newfound synchronization capabilities of the Portacapture X8, “The ability to use wireless timecode and synchronize the Portacapture X8 to cameras takes the unit to an entirely new level of capability designed for adding supreme audio to top-level video and cinema production. I ‘m confident that the combined effort of TASCAM and ATOMOS will result in greater flexibility for audio and video professionals that will ultimately, bring about a higher overall level of production.”

“We’re delighted that TASCAM have integrated ATOMOS AirGlu Bluetooth timecode synchronization into the Portacapture X8 audio recorder. This means ATOMOS and TASCAM products can be wirelessly paired and timecode locked together. This greatly simplifies the nature of separate audio and multi-camera production, transforming what has been a rarefied workflow into one that can be easily accessed by filmmakers everywhere. A great example of forward-thinking companies pushing the boundaries enabling streamlined solutions for our customers,” - Paul Scurrell, SVP Product, ATOMOS.