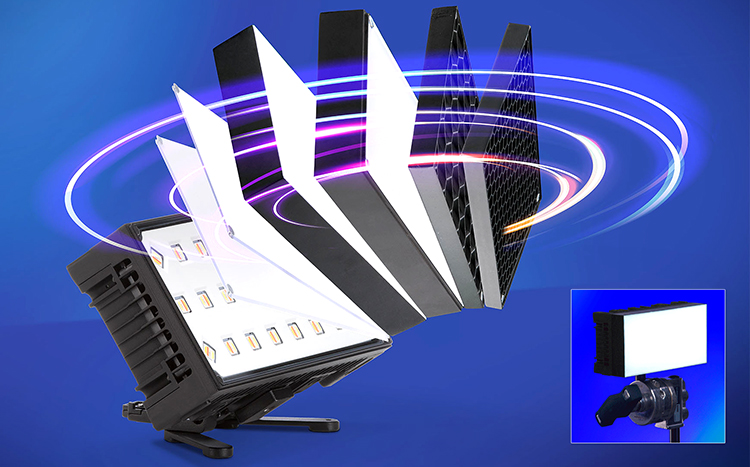 The HydraPanel stands out in a busy ‘LED panel’ marketplace offering many unique features not found in any ‘pixel’ product, like a beam-shaper module, magnetic mounting, and the Titan LED engine’s superior colour mixing, dimming characteristics and exceptional quality of light.

The neat six-pixel product weighs 600g and has an inbuilt battery and wireless DMX module making it ultimately flexible and useable anywhere. It can also be run fully wired.

It is IP65 rated in both wired & wireless scenarios so it can be used outdoors or in damp or otherwise challenging atmospheric conditions.

Each HydraPanel emits 1300 Lumens of high-quality light giving 515 Lux at 1 metre (without filter) and a high CRI and TLCI.

Accessories include a ConnectorPlate which connects two HydraPanels together, and up to 4 panels can be joined using three ConnectorPlates to create a medium size panel that is still very compact, lightweight, and highly manoeuvrable.

Uses will include key for lighting people as well as illumination of more substantial areas such as stages, scenery, and buildings. Larger Arrays of HydraPanels can be used as a low-resolution screen / video effect, and the products look fabulous on camera, either highlighting people and objects or as cool back-of-camera fill.

Like Astera’s PixelBrick, power and data are delivered via PowerBox 2x86W devices, and for larger setups, 8 x HydraPanels can be connected to the PowerBox via Power/Data combination cables. This is ideal for building bigger and more dramatic effects for stages, festivals and events.

Once arrayed, IR communication between HydraPanels enable multiple units to be controlled from a single console or controller for continuity of parameters like colour, brightness, etc.

The fixture’s display includes dedicated colour and brightness buttons for swift, accurate adjustment, and new ‘TouchSliders’ for tweaking these vital settings.
For quick and easy rigging, the back side of the fixture is magnetic and can be deployed without needing any other mounting accessories.

The units look unobtrusive when ensconced as set ‘practicals’, and with scenic lighting and adaptability in mind, six beam modifiers are also available to adjust the HydraPanel’s native 110° x 100° beam.

These include DiffusorSheet 100 which gives a soft light and 100° beam angle without increasing its height - which is great for key lighting people. A SoftFrame 100 filter can be added to distance the filter from the HydraPanel unit, enhancing smoothness and creating shadows when mounted to a camera or on structures and stages.

An Intensifier 80 creates a narrower 80° beam for longer throw applications and for those close ups when a light boost is needed. The Intensifier 80 has 4 magnets allowing two Egg Crates to be attached - EggCrate 60 which eliminates light spill around the beam and avoids glare, resulting in a 60° beam, or EggCrate 40 which does the same, producing a 40° beam.

GelHolder secures a filter gel in place, and all these beam modifiers can all be attached quickly and painlessly as needed via the 4 small magnets on the top of the HydraPanel.

With flexibility paramount, a FlexBase accessory can be added via the Cold Shoe and utilised as a floor stand, and once the FlexBase is fixed in place, the HydraPanel can be titled via a hinge and four threads facilitate numerous other installation methods including the attachment of hangers.

Specially designed cases for one HydraPanel are available from Astera complete with Titan Tube PSU and all 6 beam shaping modifiers plus a FlexBase, ConnectorPlate and BabyPin double-ended spigot, while a 4-unit charging case comes with a Hyperion Tube PSU and the lights are recharged through contacts. The streamlined case design accommodates all 6 beam shapers plus FlexBase, ConnectorPlate and BabyPin accessories for all four lights.

A DOP Choice SnapBag is also now available from Astera for the HydraPanel.