Delivering 144 ScoopTeam codecs to Cameroon to ensure the successful coverage of CHAN and CAN 21.

The African Nations Championship takes place every two years and the 2021 edition was held from Jan. 16-Feb. 7. The 2021 Africa Cup of Nations was originally slated to take place in June and July 2021. However, the Confederation of African Football postponed the event due to harsh climatic conditions and rescheduled it for Jan. 9-Feb. 6, 2022, while retaining the name 2021 Africa Cup of Nations for sponsorship purposes. 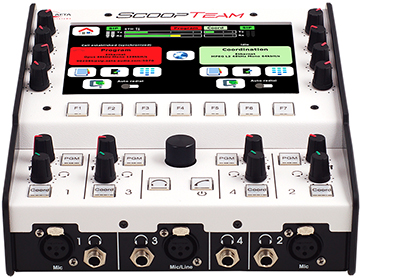 At the request of Loca Images, a systems integrator based in Paris, AETA’s technical team adapted the ScoopTeam commentary codec to meet specifications for these events. In total, AETA provided 144 ScoopTeam units, which were used in five locations throughout Cameroon during both occasions.

Specifically, to meet the technical requirements defined for these competitions, AETA had to fine-tune its flagship product by, among other things, reducing the number of commentator positions from the regular four to just three. It also had to include a “power-over-Ethernet” feature, which eliminated the need for a main power supply at the stadium.

While ScoopTeam is mainly an audio over IP device, station staff made use of the DANTE interface for the internal networks of each stadium and the ISDN interface for the remote links, benefiting from the fact that AETA still also delivers this technology.

Imed ben Ameur, Technical Director at Loca Images, designed and managed the installation and stayed on site in Cameroon during both competitions to accompany ScoopTeam users and ensure streamlined operations of all equipment.

Ben Ameur explains that Loca Images chose AETA’s ScoopTeam based on many parameters. One of the main factors was compliance to the defined specifications, including ISDN. But in addition, says Ben Ameur, the product’s versatility, future-proofness and ergonomics also added solid advantages. Finally, the responsiveness and partnership spirit of AETA team clearly helped in making turning this project into a success story.

"Beyond the technical respect of the specifications, the ergonomics of the ScoopTeam user interface was decisive in our choice,” said Ben Ameur. "We don't regret our decision for a split second, especially since during the various broadcasts, all the local technicians were able to operate the products with almost no help from us.”

He specifically stated that Loca Images particularly appreciated the fact that the units were easy to use and they experienced no equipment failure during any of the competitions. This, he adds, despite particularly sweltering weather conditions, sometimes up to 50°C in the stands.

"We are very proud to have collaborated with Loca Images on this large-scale project, which clearly demonstrates the versatility of our ScoopTeam codecs,” added Yann Vonarburg, AETA General Manager.