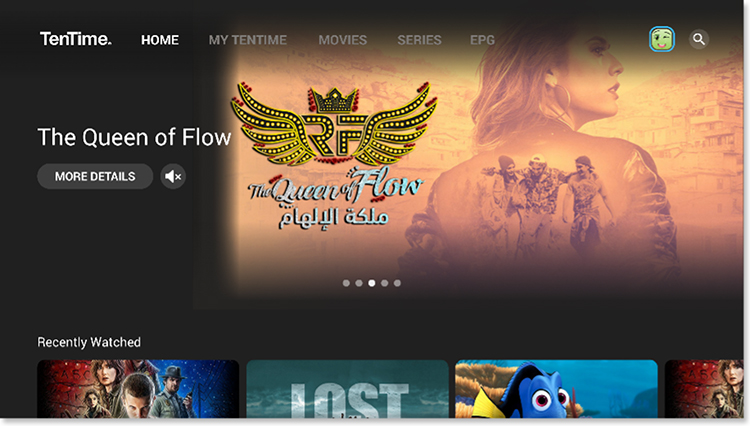 SWE: Accedo has enabled TenTime to expand the availability of content on its SVoD service to Connected TV platforms, delivering international (dubbed in Arabic) and Arabic series, movies and TV shows, in addition to its vast Original Productions to be launched in October 2021. The TenTime Connected TV apps were developed and launched using Accedo Elevate, a cost-efficient templated video solution that is designed for portability and enables rapid time to market.

TenTime is an interactive 360-entertainment VOD platform with the MENA region at the heart of it, providing a range of productions from all around the Arab World, which are not widely available on one single platform elsewhere. It is the first SVoD service that gives Arabs the chance to watch series, movies, and shows stress-free. TenTime also went above and beyond to satisfy the audience with a diverse library of Arabic music, venturing with Iraq’s top singers and now partnering with the region’s most popular music platform Anghami.

With TenTime already offering an SVoD service to iOS and Android devices, TenTime was keen to expand its reach to connected TVs cost-effectively, while still delivering a great user experience. Tentime is available in Iraq, Jordan, Syria, Lebanon, KSA, Kuwait, UAE, Algeria, Tunisia and a number of neighbouring countries, and can now be streamed on Samsung, LG, and Android-based Connected TVs.

Accedo Elevate is a fully functioning app solution with a library of core UI and service components comprising an advanced application framework that may be quickly adapted and customized. Accedo Elevate uses an established architecture that is simple to integrate and extend as required, creating a starting point for the development process, and gets video services to market fast and cost effectively. Elevate includes key pre-built features suited for connected TV platforms, such as an EPG grid and the ability to stream live content. As TenTime is a dedicated place for Arabic communities, Accedo Elevate natively includes both Right to Left and Left to Right language support.

Accedo provided a project team which worked closely with the internal team at TenTime to customize the video service, integrate the desired feature sets, and deploy the video service, leveraging the framework capabilities of Accedo Elevate.

Walid Finan, CEO, TenTime, commented: “With TenTime, we wanted to build a core platform for Arabic and localised content, something which is currently missing in this market. We knew that it would be essential for us to have our service available across multiple Smart TVs however with each device having a different operating system and device requirements, this was a challenge. Accedo worked closely with our team and enabled us to navigate those complexities to launch in a very short time frame and on budget.”

Michael Lantz, CEO, Accedo, added: “While there are many OTT services delivering international titles, there is a growing demand for a more localized approach, especially in terms of language. We’re thrilled to be working with TenTime, which is revolutionizing the highly dynamic Arab entertainment landscape and delivering a fully localized service for the Arab-speaking world.”

Following a successful initial launch, TenTime is planning to extend its offering to other platforms in the coming months.