What’s Trending in the World of KVM? 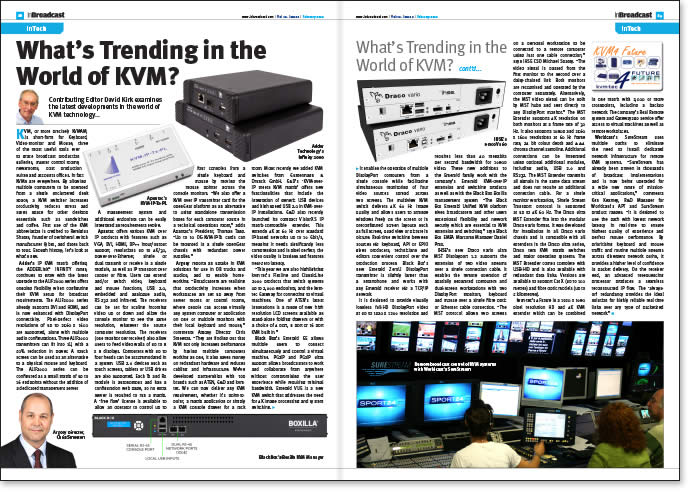 KVM, or more precisely KVMAM, is short-form for Keyboard, Video-monitor and Mouse, three of the most useful tools ever to grace broadcast production galleries, master control rooms, newsrooms, post production suites and accounts offices. In fact KVMs are everywhere. By allowing multiple computers to be operated from a single uncluttered desk space, a KVM switcher increases productivity, reduces stress and saves space for other desktop essentials such as sandwiches and coffee. First use of the KVM abbreviation is credited to Remigius Shatas, founder of peripheral switch manufacturer Cybex, and dates back to 1995. Enough history; let’s look at what’s new.

Adder’s IP KVM matrix offering, the ADDERLink® INFINITY range, continues to grow with the latest upgrade to the ALIF2000 series offers ongoing flexibility when configuring their KVM setup for broadcast requirements. The ALIF2000 series already supports DVI and HDMI, and is now enhanced with DisplayPort connectivity. Pixel-perfect video resolutions of up to 2560 x 1600 are supported, along with multiple audio configurations. Three ALIF2000 transmitters can fit into 1U, with a 50% reduction in power. A touch screen can be used as an alternative to a physical mouse and keyboard. The ALIF2000 series can be configured as a small matrix of up to 16 endpoints without the addition of a dedicated management server.

A management system and additional endpoints can be easily integrated as requirements evolve.

Apantac offers various KVM over IP products with features such as VGA, DVI, HDMI, DP++ input/output support, resolutions up to 4K/30, power-over-Ethernet, single or dual transmit or receive in a single module, as well as IP transport over copper or fibre. Users can extend and/or switch video, keyboard and mouse functions, USB 2.0, embedded and analogue audio, RS-232 and infra-red. The receivers can be set for scaling incoming video up or down and allow the console monitor to see the same resolution, whatever the source computer resolution. The receivers (one monitor per receiver) also allow users to feed video walls of up to 8 x 8 displays. Computers with up to four heads can be accommodated in a system. USB 2.0 devices such as touch screens, tablets or USB drives are also supported. Each Tx and Rx module is autonomous and has a configuration web page, so no extra server is required to run a matrix. A ‘free flow’ license is available to allow an operator to control up to four consoles from a single keyboard and mouse by moving the mouse pointer across the console monitors. “We also offer a KVM over IP transmitter card for the openGear platform as an alternative to using standalone transmission boxes for each computer source in a technical operations room,” adds Apantac’s President, Thomas Tang. “Up to 10 OG-KVM-IP-Tx cards can be mounted in a single openGear chassis with redundant power supplies.”

Argosy reports an uptake in KVM solutions for use in OB trucks and studios, and to enable home-working. “Broadcasters are realising that productivity increases when workspaces are set up away from server rooms or control rooms, where people can access virtually any system computer or application on one or multiple monitors with their local keyboard and mouse,” comments Argosy Director Chris Smeeton. “They are finding out that KVM not only increases performance by having multiple computers working as one, it also saves money on redundant hardware and reduces cabling and infrastructure.

We’ve developed partnerships with top brands such as ATEN, G&D and kvm-tec. We can now deliver any KVM requirement, whether it’s point-to-point, a matrix application or simply a KVM console drawer for a rack room. Most recently we added KVM switches from Guntermann & Drunck GmbH. G&D’s ‘KVM-over-IP meets KVM matrix’ offers new functionalities that include the integration of generic USB devices and high speed USB 2.0 in KVM-over-IP installations. G&D also recently launched its compact VisionXS IP matrix-compatible extender. This extends 4K at 60 Hz over standard IP-based networks up to 10 Gbit/s, meaning it needs significantly less compression and is pixel-perfect; the video quality is lossless and features near-zero latency.

“This year we are also highlighting kvm-tec’s Flexline and ClassicLine 2000 products that switch systems up to 2,000 endpoints, and the kvm-tec Gateway for connecting to virtual machines. One of ATEN’s latest innovations is a range of new high resolution LCD screens available as stand-alone folding drawers or with a choice of 4 port, 8 port or 16 port KVM built in.”

It enables the operation of multiple DisplayPort computers from a single console while facilitating simultaneous monitoring of four video sources spread across two screens. The multiview KVM switch delivers 4K 60 Hz image quality and allows users to arrange windows freely on the screen or in preconfigured screen layouts such as full screen, quad view or picture in picture. Real-time switching between sources via keyboard, API or GPIO gives producers, technicians and editors convenient control over the production process. Black Box’s new Emerald ZeroU DisplayPort transmitter is slightly larger than a smartphone and works with any Emerald receiver via a TCP/IP network.

It is designed to provide visually lossless full-HD DisplayPort video at up to 1920 x 1200 resolution and requires less than 40 megabits per second bandwidth for 1080p video. These new additions to the Emerald family work with the company’s Emerald KVM-over-IP extension and switching products as well as with the Black Box Boxilla management system. “The Black Box Emerald Unified KVM platform gives broadcasters and other users exceptional flexibility and network security which are essential to KVM extension and switching,” says Black Box EMEA Marcoms Manager Daniel Prax.

IHSE’s new Draco vario ultra MST Displayport 1.2 supports the extension of two video streams over a single connection cable. It enables the remote operation of spatially separated computers and dual-screen workstations with two DisplayPort monitors, keyboard and mouse over a single fibre optic or Ethernet cable connection. “The MST protocol allows two screens on a personal workstation to be connected to a remote computer using just one cable connection,” says IHSE CSO Michael Spatny. “The video signal is passed from the first monitor to the second over a daisy-chained link. Both monitors are recognised and operated by the computer separately. Alternatively, the MST video signal can be split by MST hubs and sent directly to any DisplayPort monitor.” The MST Extender supports 4K resolution on both monitors at a frame rate of 30 Hz. It also supports 1080p and 2560 x 1600 resolutions at 60 Hz frame rate, 24 bit colour depth and 4:4:4 chroma channel sampling. Additional connections can be integrated using optional additional modules, including audio, USB 2.0 and RS232. The MST Extender transmits all signals in the same data stream and does not require an additional connection cable. For a single monitor workstation, Single Stream Transport protocol is supported at up to 4K 60 Hz. The Draco ultra MST Extender fits into the modular Draco vario format. It was developed for installation in all Draco vario chassis and is compatible with all extenders in the Draco ultra series, Draco tera KVM matrix switches and major operating systems. The MST Extender comes complete with USB-HID and is also available with redundant data links. Versions are available to support Cat X (up to 100 metres) and fibre optic models (up to 5 kilometres).

kvm-tec’s 4Future is a 1920 x 1080 pixel resolution HD and 4K KVM extender which can be combined in one matrix with 2,000 or more crosspoints, including a backup network. The company’s Real Remote system and Gateway2go service offer access to virtual machines as well as remote workplaces.

Worldcast’s SureStream uses multiple paths to eliminate the need to install dedicated network infrastructure for remote KVM systems. “SureStream has already been proven in thousands of broadcast implementations and is now being upgraded for a wide new range of mission-critical applications,” comments Ken Kearney, R&D Manager for Worldcast’s APT and SureStream product ranges. “It is designed to use the path with lowest network latency in real-time to ensure highest quality of experience and perfect mouse performance. By prioritising keyboard and mouse traffic and routing multiple streams across divergent network paths, it provides a higher level of confidence in packet delivery. On the receiver end, an advanced resequencing processor produces a seamless reconstructed IP flow. The ‘always-on’ redundancy provides the ideal solution for highly reliable real-time links over any type of packetized network.”