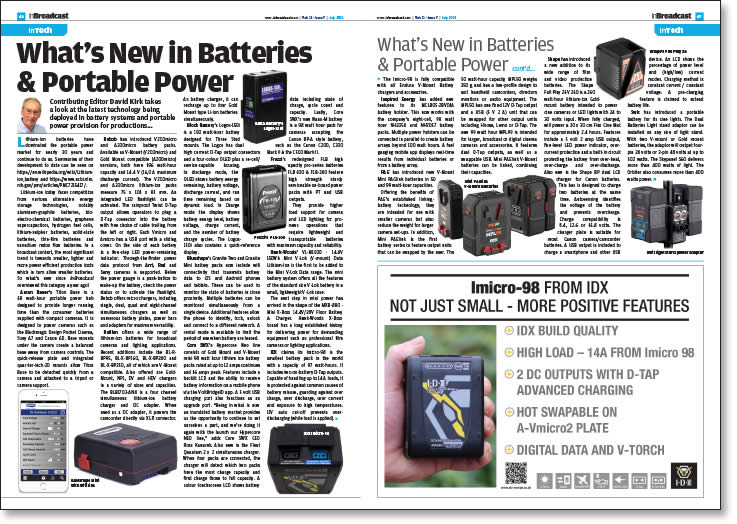 Lithium-ion batteries have dominated the portable power market for nearly 30 years and continue to do so. Summaries of their development to date can be seen on https://en.wikipedia.org/wiki/Lithium-ion_battery and https://www.ncbi.nlm.nih.gov/pmc/articles/PMC7215417/.

So what’s new since InBroadcast overviewed this category a year ago?
Anton Bauer’s Titon Base is a 68 watt-hour portable power hub designed to provide longer running time than the consumer batteries supplied with compact cameras. It is designed to power cameras such as the Blackmagic Design Pocket Cinema, Sony A7 and Canon 6D. Base mounts under the camera create a balanced base away from camera controls. The quick-release plate and integrated quar-ter-inch-20 mounts allow Titon Base to be detached quickly from a camera and attached to a tripod or camera support.

Bebob has introduced V200micro and A200micro battery packs. Available as V-Mount (V200micro) and Gold Mount compatible (A200micro) versions, both have 196 watt-hour capacity and 14.4 V (16,0 A maximum discharge current). The V200micro and A200micro lithium-ion packs measure 75 x 101 x 81 mm. An integrated LED flashlight can be activated. The rainproof Twist D-Tap output allows operators to plug a D-Tap connector into the battery with free choice of cable trailing from the left or right. Each Vmicro and Amicro has a USB port with a sliding cover. On the side of each battery is a five-step LED power-remaining indicator. Through-the-finder power data protocol from Arri, Red and Sony cameras is supported. Below the power gauge is a push-button to wake-up the battery, check the power status or to activate the flashlight. Bebob offers micro chargers, including single, dual, quad and eight-channel simultaneous chargers as well as numerous battery plates, power bars and adapters for maximum versatility.

Beillen offers a wide range of lithium-ion batteries for broadcast cameras and lighting applications. Recent additions include the BL-R-BP95, BL-X-BP160, BL-X-BP240 and BL-X-BP250, all of which are V-Mount compatible. Also offered are Gold-Mount, NP1, DV and HDV chargers in a variety of sizes and capacities. The BLB1703-AN4 is a four channel simultaneous lithium-ion battery charger and DC adapter. When used as a DC adapter, it powers the camcorder directly via XLR connector. As battery charger, it can recharge up to four Gold Mount type Li-ion batteries simultaneously.

Blueshape’s Granite Two and Granite Mini battery packs now include wifi connectivity that transmits battery data to iOS and Android phones and tablets. These can be used to monitor the state of batteries in close proximity. Multiple batteries can be monitored simultaneously from a single device. Additional features allow the phone to identify, lock, unlock and connect to a different network. A rental mode is available to limit the period of use when battery are leased.

Core SWX’s Hypercore Neo line consists of Gold Mount and V-Mount mini 98 watt hour lithium ion battery packs rated at up to 12 amps continues and 16 amps peak. Features include a backlit LCD and the ability to receive battery information on a mobile phone via the VoltBridgeID app. A 5 volt USB charging port also functions as an upgrade port. “Being in what is now an inundated battery market provides us the opportunity to continue to set ourselves a part, and we’re doing it again with the launch our Hypercore NEO line,” adds Core SWX CEO Ross Kanarek. Also new is the Fleet Quantum 2 x 2 simultaneous charger. When four packs are connected, the charger will detect which two packs have the most charge capacity and first charge those to full capacity. A colour touchscreen LCD shows battery data including state of charge, cycle count and capacity. Lastly, Core SWX’s new Nano-M battery is a 98 watt hour pack for cameras accepting the Canon BP-A style battery, such as the Canon C200, C300 Mark II & the C500 Mark II.

The next step in mini power has arrived in the shape of the MXB-880 - Mini X-Boxx 14.4V/28V Floor Battery & Charger. Hawk-Woods X-Boxx brand has a long established history for delivering power for demanding equipment such as professional film cameras or lighting applications.

IDX claims its Imicro-98 is the smallest battery pack in the world with a capacity of 97 watt-hours. It includes two on-battery D-Tap outputs. Capable of handling up to 14 A loads, it is protected against common causes of battery misuse, guarding against over charge, over discharge, over current and exposure to high temperatures. 11V auto cut-off prevents over-discharging (while load is applied).

The Imicro-98 is fully compatible with all Endura V-Mount Battery chargers and accessories.
Inspired Energy has added new features to its MCLB05-2BV01A battery holster. This now works with the company’s eight-cell, 98 watt hour NH2054 and NH2057 battery packs. Multiple power holsters can be connected in parallel to create battery arrays beyond 100 watt hours. A fuel gauging mobile app displays real-time results from individual batteries or from a battery array.

PAG has introduced new V-Mount Mini PAGlink batteries in 50 and 99 watt-hour capacities.
Offering the benefits of PAG’s established linking-battery technology, they are intended for use with smaller cameras but also reduce the weight for larger camera set-ups. In addition, Mini PAGlink is the first battery series to feature output units that can be swapped by the user. The 50 watt-hour capacity MPL50 weighs 350 g and has a low-profile design to suit handheld camcorders, directors monitors or audio equipment. The MPL50 has one fixed 12V D-Tap output and a USB (5 V 2 A) unit that can be swapped for other output units including Hirose, Lemo or D-Tap. The new 99 watt hour MPL99 is intended for larger, broadcast or digital cinema cameras and accessories. It features dual D-Tap outputs, as well as a swappable USB. Mini PAGlink V-Mount batteries can be linked, combining their capacities.

Shape has introduced a new addition to its wide range of film and video production batteries. The Shape Full Play 26V 260 is a 260 watt-hour lithium-ion Gold-mount battery intended to power cine cameras or LED lights with 24 to 30 volts input. When fully charged, will power a 30 x 30 cm Flex Cine Mat for approximately 2.4 hours. Features include a 5 volt 2 amp USB output, five-level LED power indicator, over-current protection and a built-in circuit protecting the battery from over-heat, over-charge and over-discharge. Also new is the Shape BP dual LCD charger for Canon batteries.  This has is designed to charge two batteries at the same time. Autosensing identifies the voltage of the battery and prevents overcharge. Charge compatibility is 8.4, 12.6 or 16.8 volts. The charger plate is suitable for most Canon camera/camcorder batteries. A USB output is included to charge a smartphone and other USB device. An LCD shows the percentage of power level and (high/low) current modes. Charging method is constant current / constant voltage. A pre-charging feature is claimed to extend battery life.

Swit has introduced a portable battery for its cine lights. The Dual Batteries Light stand adaptor can be installed on any size of light stand. With two V-mount or Gold mount batteries, the adaptor will output four-pin 24 volts or 3-pin 48 volts at up to 500 watts. The Skypanel S60 delivers more than 400 watts of light. The Orbiter also consumes more than 400 watts power.